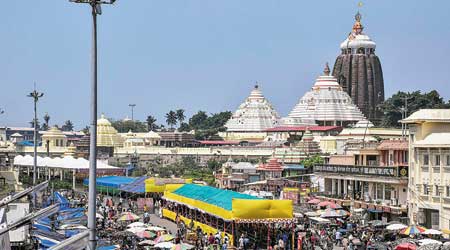 Tourist traffic in Puri is likely to be hit in the last week of December due to the rising number of omicron cases in the state.

The city that is the land of Lord Jagannath and also boasts of one of the best beaches in India used to attract nearly 2 lakh people during the yearend. But this time, tourist arrivals have declined sharply due to the pandemic.

Puri Hotel Owners Association president Rama Krushna Das Mohapatra said: “Majority of the tourists who come to Puri are devotees. But as the Jagannath temple administration has decided to close down the temple on December 31 and January 1, most of the tourists have cancelled their bookings.”

The temple will remain closed on January 2 as well as it’s a Sunday. Now the temple remains closed on all Sundays for sanitisation of its premises.

Hoteliers said “80 per cent of the domestic tourists in Puri are from Bengal. As the temple will remain closed for three days, they will not extend their holidays and prefer not to come. We have already witnessed cancellation of bookings.”

Mohapatra said after the corona pandemic subsided, Puri has witnessed an increase in the tourist footfall. “But now the news about the omicron variant is playing havoc as people are in a state of panic. The omicron threat and the three-day temple closure will have a major impact on the tourism industry,” he said.

Puri has nearly 1,000 hotels and lodging of different types. In normal times almost all of them are packed with tourists during the year-end. But this time it’s different. “Owners are struggling to clear the dues of their staff. A further decline in the tourist footfall will hit us all badly,” said another hotel owner.

Harekrushna Patra, whose camel gives tourists joy rides on the Puri beach, said: “For the last two years, we have been struggling to make a decent living. We have not even been able to feed our camels properly, let alone running our families. We hope and pray that things become normal and tourists return to Puri. It is heartbreaking to know that the Puri Jagannath temple will remain closed for three days. This is going to hit the tourism industry badly,” said Patra.

However, temple officials maintained they won’t take a chance during this corona pandemic. “If the temple is opened for people, lakhs of them will throng Puri and it will become impossible to maintain Covid guidelines. We cannot take such a risk,” officials maintained.

“When everyone is worried about bringing back tourists to Puri, the administration’s decision to declare a part of the Puri beach as blue flag beach and not allow hawkers in the area is affecting the business of small vendors.”

However, others feel that for high-end tourists, the government needs to promote concepts like blue flag beach. It is a step towards making the beach clean and more  attractive for the tourists from other parts of the country. “We will not convert the entire beach into blue flag beach but only a part of it,” said a senior official of the Puri district administration.

The tourism department had reported a 99 percent drop in the arrival of foreign tourists and 84 per cent drop in the arrival of domestic tourists to the state in 2020-21 due to the Covid crisis. After Puri Shree Jagannath temple re-opened for devotees from August 16, the pilgrim town Puri had witnessed the increase in tourist footfall. But things may go back to square one again.