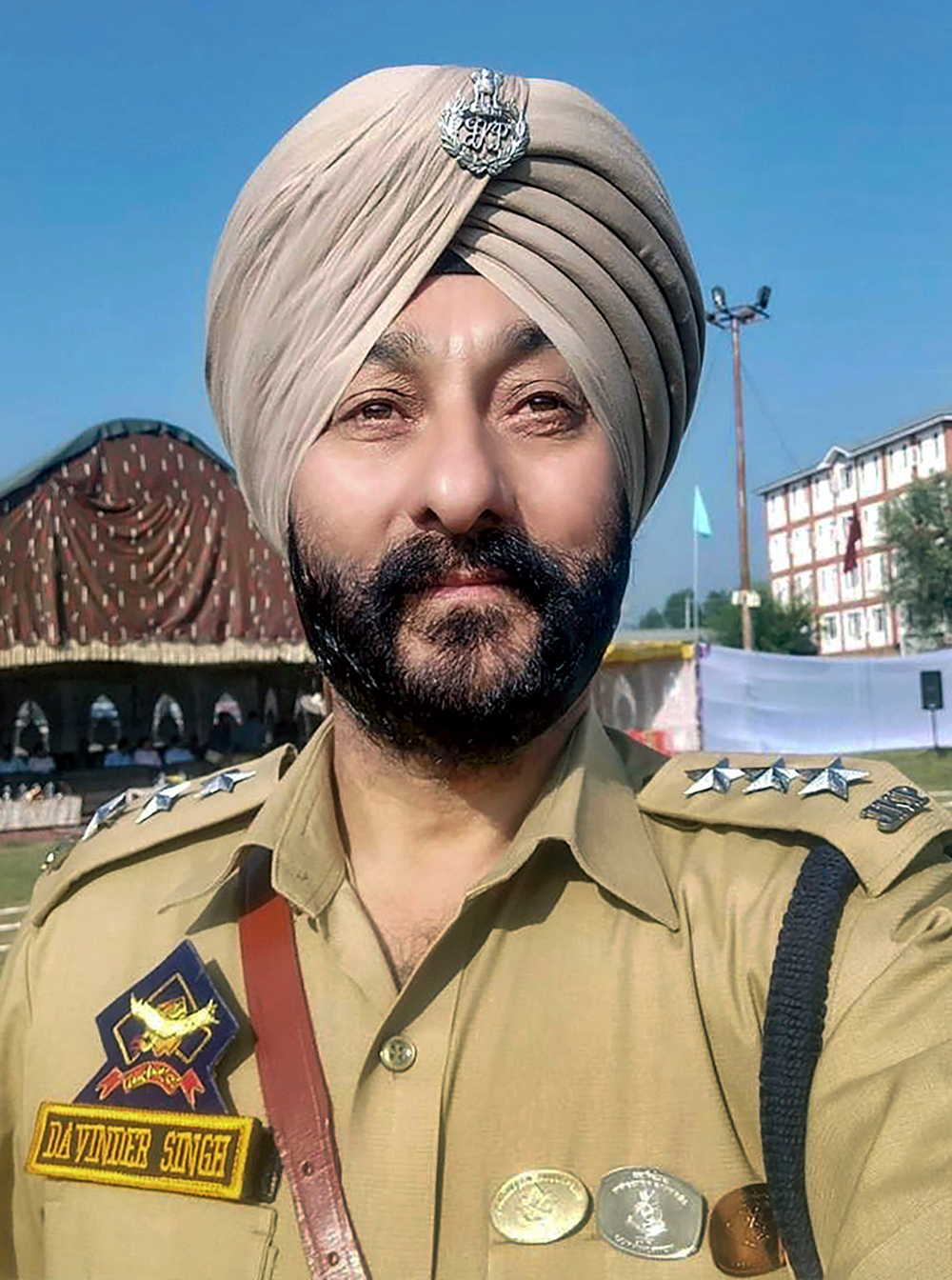 The decorated police officer arrested on Friday for alleged militant links had often sheltered top Hizbul Mujahideen operatives at his rented house adjoining the army’s 15 Corps headquarters and escorted them outside the state, police sources have claimed.

Deputy superintendent of police (anti-hijacking) Davinder Singh, a counter-insurgency expert with two-and-a-half decades’ experience, was arrested on the Srinagar-Jammu national highway while travelling in a private SUV with three alleged Hizb militants, they added.

One of the three was the Hizb’s Valley deputy chief Naveed Babu — a one-time police deserter with a reward of Rs 20 lakh on his head — and another was an over-ground Hizb worker whom the police had never suspected, the sources claimed.

Singh’s arrest has left the authorities red-faced. The officer, in his 50s, had in the past too been linked to militancy, specifically in connection with the 2001 Parliament attack, but never been investigated. He was awarded the President’s gallantry medal last year.

Officers said Singh and the militants were on their way to Delhi but it was not clear why.

Afzal Guru, who was hanged in 2013 over the Parliament attack, had claimed Davinder had instructed him to take a Pakistani militant, Mohammad, to Delhi and arrange his stay there. Mohammad was one of the five militants who later stormed Parliament in December 2001.

Guru’s claim was not investigated at the time but Valley police chief Vijay Kumar said on Sunday that Singh would be questioned about the allegation. Kumar, however, said the police had nothing on record about Guru’s claims.

Police sources said that Singh had ferried the three militants in his own car from their base in Shopian to his home on Thursday. The trio allegedly spent the night at Singh’s highly secure residence in Srinagar’s Indra Nagar locality that shares a boundary wall with the 15 Corps headquarters.

On Friday morning, the four of them left for Delhi in an i20 owned by another private individual but were intercepted and accosted, the police sources said.

The police claimed to have recovered some arms from Singh’s residence during a raid on Sunday. The house was locked on Monday: Singh’s family had apparently left for some undisclosed place. Sources said Singh was building his own house nearby.

Apart from Naveed, officers identified the alleged militants travelling with Singh as Irfan and Rafi. They said Irfan had visited Pakistan five times with proper travel documents over the years, with the police apparently clueless about his activities.

Naveed is accused of involvement in many civilian and police deaths in the Valley. He was allegedly behind the recent militant campaign against non-local people that led to the killing of several outside truckers and labourers.

“Singh had ferried Naveed to many places in the past. He took him to Delhi also in 2018,” an officer said. “The four were on their way to Jammu (on Friday) but the eventual destination was Delhi.”

Kumar had said on Sunday that Singh had been involved in a heinous crime and would be treated like a militant.

Anti-militancy operations have picked up pace following the high-profile arrests despite heavy snowfall in the Valley. Four militants died in two gunfights in the past two days.

The Congress has demanded to know whether there was a “bigger conspiracy” behind Singh’s arrest.

“Was he carrying Hizbul terrorists on his own or is he only a pawn, as master conspirators are elsewhere? A bigger conspiracy?”