'The offence of sedition cannot be invoked to minister to the wounded vanity of governments,' the court observed 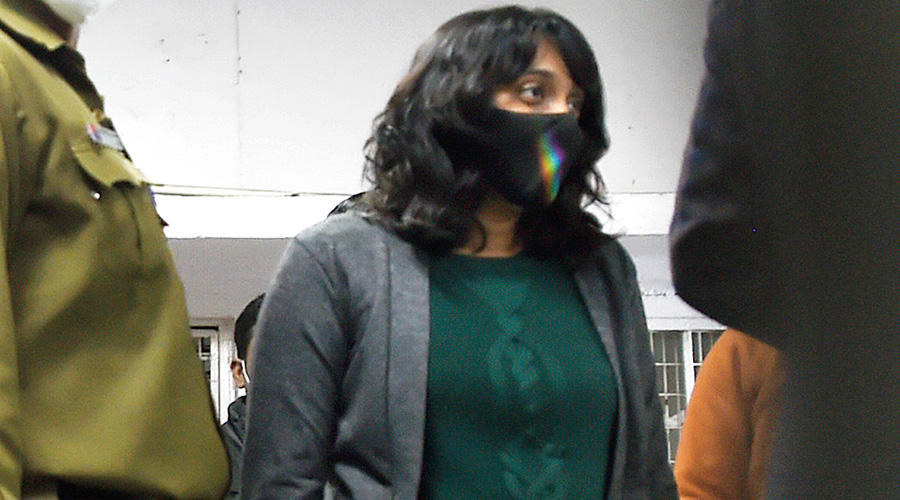 Let noble thoughts come to me from all directions. Quoting the Rig Veda and reminding the nation that “this 5,000-year-old civilisation of ours has never been averse to ideas from varied quarters”, a Delhi sessions court on Tuesday granted bail to climate activist Disha Ravi.

The bail order demolishes almost every charge levelled against the young Bangalorean, in judicial or police custody since February 14. She had been arrested from her home a day earlier on the charge of editing and sharing an online “toolkit” on the farmers’ protest and booked for sedition. Disha was released late on Tuesday night.

“Considering the scanty and sketchy evidence available on record, I do not find any palpable reasons to breach the general rule of ‘bail’ against a 22-year-old young lady, with absolutely blemish-free criminal antecedents and having firm roots in the society, and send her to jail,” additional sessions judge Dharmender Rana said.

Recalling the pre-independence Niharendu Dutt Mazumdar v. Emperor AIR case, Judge Rana said: “The offence of sedition cannot be invoked to minister to the wounded vanity of governments.” The 1942 verdict was among several that had implied that sedition cannot come into play without incitement to violence.

The bail order answered several questions that will affect the young and the restless, including the status of protest toolkits in a democratic society, the urge to engage with people around the world and respond to issues of public interest regardless of borders and the use of social media to build public opinion.

In one of the most prudent observations, the judge said: “Creation of a WhatsApp group or being editor of an innocuous toolkit is not an offence. Further, since the link with the said toolkit… has not been found to be objectionable, mere deletion of the WhatsApp chat destroys the evidence linking her with the toolkit… also becomes meaningless.”

The police — and a section of pro-government media — have been making a mountain out of the contention that Disha had deleted a group chat.

Judge Rana said the nub of the issue was whether Disha (bail applicant/accused) was merely involved in peaceful protest and dissent against the farm laws or actually involved in seditious activities under the guise of protesting against the legislation.

The following are some of the key charges levelled by Delhi police and the paraphrased response of the judge whose order adds that “nothing observed herein shall have any bearing upon the merits of the case”.

A pro­Khalistani secessionist group, the Poetic Justice Foundation (PJF), and people associated with it are directly linked with creation of the toolkit document. Disha’s associates Nikita and Shantanu attended a Zoom meeting with 60­70 people from across the world, including Mo Dhaliwal and Anita Lal.

In the absence of any evidence that Disha agreed or shared a common purpose to cause violence on January 26 with the founders of the PJF, it cannot be presumed by resorting to surmises or conjectures that she also supported the secessionist tendencies or the violence caused on January 26, simply because she shared a platform with people who have gathered to oppose the legislation.

Not even an iota of evidence is brought to my notice connecting the perpetrators of the violence on January 26 with the PJF or the applicant/accused.

More than hundreds of persons involved in the violence have been arrested and interrogated by Delhi police but no evidence connecting Disha with the actual perpetrators of the violence has been brought forth on record by the prosecution till date.

Charge: On January 11, 2021, a banned terrorist organisation, the Sikhs for Justice, issued an open communication declaring a reward of $250,000 for anyone who will hoist the flag of Khalistan at India Gate on Republic Day.

Judge: There is absolutely no link established on record between Disha and the banned organisation.

Charge: There is link between Indian conspirators, including Disha and Kisaan Ekta.co (Vancouver) through an organisation, Extinction Rebellion. The WhatsApp group Intl Farmers Strike was used in furtherance of a request that came from Kisaan Ekta.co.

Judge: It has neither been averred nor proved that Kisaan Ekta.co is an organisation with seditious agenda.

Charge: In the toolkit document, there was a segment titled “Prior Action” which included Digital Strike through hashtags on January 26 and earlier, Tweet Storm from January 23, physical action on January 26 and joining the farmers’ march into Delhi and then back to the border. Another part of the same document mentioned tasks such as disruption of India’s cultural heritage such as yoga and tea and targeting Indian embassies abroad.

Judge: The perusal of the said toolkit reveals that any call for any kind of violence is conspicuously absent. In my considered opinion, citizens are conscience keepers of the government in any democratic nation. They cannot be put behind the bars simply because they choose to disagree with the state policies. The offence of sedition cannot be invoked to minister to the wounded vanity of the governments. Difference of opinion, disagreement, divergence, dissent, or for that matter, even disapprobation, are recognised legitimate tools to infuse objectivity in state policies. An aware and assertive citizenry, in contradistinction with an indifferent or docile citizenry, is indisputably a sign of a healthy and vibrant democracy….

Except for a bare assertion, no evidence has been brought to my notice to support the contention that any violence took place at any of the Indian embassies pursuant to the sinister designs of Disha and her co­conspirators.

Charge: The toolkit has embedded hyperlinks with an intent to malign India abroad. Two such hyperlinks were brought to my (judge’s) notice. The first one led to the website askindiawhy.com and the second one led to Genocide.org.

Judge: I find absolutely nothing objectionable in the said page. Upon perusal of the material available on Genocide.org, it is revealed that it carries certain facts about the status of human right violations in somewhere about 40 countries, including India.

I concur with the additional solicitor-general, without commenting upon the sanctity of the information, that the imputations are really objectionable in the said website.

However, even if the said imputations are found to be objectionable in nature, I cannot but disagree with the additional solicitor-general that the material is seditious in nature. The imputations may be false, exaggerated or even with a mischievous intent but the same cannot be stigmatised as being seditious unless they have tendency to foment violence.

Charge: Disha created the WhatsApp group, “Intl farmers strike”, and added certain persons in the group. She deleted the group chat from her phone in an attempt to destroy the crucial evidence linking her with the toolkit and the PJF. She is one of the editors of the toolkit. She tried her best to conceal her identity so that legal action could not be taken against her. She gave a global audience to the secessionist elements by manipulating support of international youth icon Greta Thunberg. Disha’s co­accused Shantanu came to Delhi to ensure the execution of the plan.

Judge: In my considered opinion, creation of a WhatsApp group or being editor of an innocuous toolkit is not an offence. Further, since the link with the said toolkit or the PJF has not been found to be objectionable, mere deletion of the WhatsApp chat to destroy the evidence linking her with the toolkit and the PJF also becomes meaningless.

Further, it is rightly pointed out by the defence counsel that the protest march was duly permitted by Delhi police. Therefore, there is nothing wrong in co­accused Shantanu reaching Delhi to attend the protest march.

The attempt to conceal her identity seems to be nothing more than an anxious effort to stay away from unnecessary controversies.

Charge: Disha sought the support of international personalities using her previous acquaintance. She shared the toolkit with Thunberg.

Judge: There is nothing on record to suggest that the applicant accused subscribed to any secessionist idea. The prosecution has, except for pointing out that Disha forwarded the toolkit to Thunberg, failed to point out as to how Disha gave global audience to the “secessionist elements”.

The judge also touched upon other issues, such as the difficulty in proving the conspiracy charges and the view from the other side.

I’m also conscious of the fact that the investigation is at a nascent stage and police are in the process of collecting more evidence. However, the investigating agency made a conscious choice to arrest the applicant accused upon the strength of material so far collected and now they cannot be permitted to further restrict the liberty of a citizen on the basis of propitious anticipations.

Judge: Prosecution has also opposed the release of the applicant accused on bail on the ground that she is required to be confronted with the co-accused.

There is no rule of law or prudence, at least that I am aware of, that a person is mandatorily required to be detained in custody to be confronted with the co­accused persons. The applicant accused is already reported to have been interrogated in police custody for almost about five days and placing any further restraint upon her liberty on the basis of general and omnibus accusation would be neither logical nor legal.

'Assertive citizenry is the hallmark of democracy'