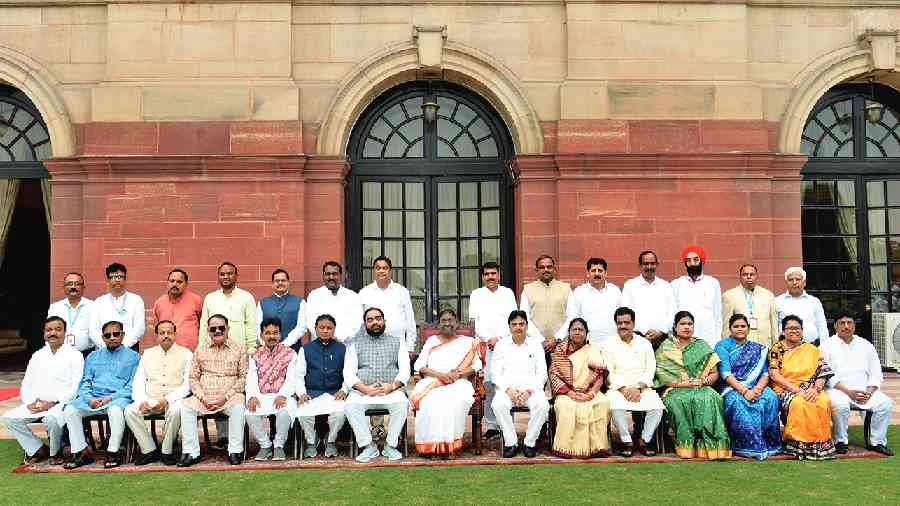 Odisha Speaker and MLAs with President Droupadi Murmu at Rashtrapati Bhavan on Wednesday
Sourced by The Telegraph
Subhashish Mohanty   |   Bhubaneswar   |   Published 04.08.22, 02:26 AM

Arukha presented her a copy of the motion passed by the Assembly unanimously congratulating Murmu on her victory.

The MLAs presented her mahaparasad (the prasad of the Jagannath temple in Puri) and saris. Later the President tweeted her photo with the MLAs.

The Speaker said: “She was overwhelmed by our gesture. It’s a proud moment for all of us. We gave her the sankalpa (motion) passed by the Odisha Assembly on her victory.”

The BJD had extended support to Murmu during the presidential election as she belongs to Odisha.

Chief minister Naveen Patnaik had personally appealed to Congress leaders to support Murmu even though she belonged to the BJP and was NDA’s candidate.

After Murmu was elected, Patnaik went to Delhi to attend her swearing-in ceremony.

Though Congress MLAs, barring one, did not vote in favour of Murmu, they were also part of the delegation.

Senior Congress MLA Tara Prasad Bahinipati said: “I presented her a sari locally made in Koraput district. The sari is popularly known as Kotpad sari for its design. For the first time, she came to Odisha Assembly in 2000 after winning the Rairangpur Assembly seat on a BJP ticket. I, too, was elected to the Odisha Assembly on a Congress ticket. Since then, we have enjoyed the bonding of a brother and sister. I had even visited her when she was the Jharkhand governor.”

Few others also presented her saris.

Senior BJD MLA Debi Prasad Mishra said: “We have been touched by her humility. We moved around the Rashtrapati Bhavan and came to know about its art and architecture. We were quite happy to see the daughter of Odisha occupying the office of the President.”

Senior BJP MLA Bishnu Sethi presented her with a photo frame of his poem highlighting Murmu’s journey from her native town Rairangpur in Odisha to Raisina Hill in New Delhi.