Advertisement
Home / India / Odisha gets GI tag for its Rasagola

Odisha gets GI tag for its Rasagola

Rasa or Roso? Take your gola or golla 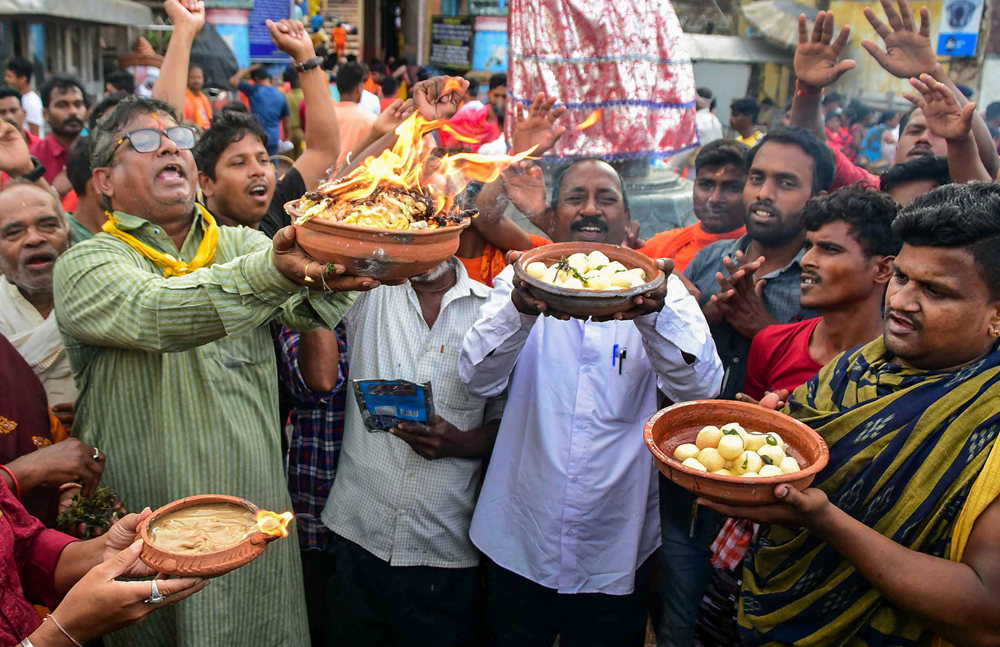 Odisha on Monday received the geographical indication (GI) tag for the Odisha Rasagola, achieving parity with Bengal in the battle over which of them is the original home of the popular, juicy sweet.

Bengal had already obtained the GI tag for Banglar Rosogolla in November 2017, causing anguish in Odisha where many believe the sweet has featured at Puri’s Jagannath Temple since the 12th century and was carried to Bengal by Odia cooks fleeing the 1866 famine.

What the dual GI tag does is set Odisha’s rasagola and Bengal’s rosogolla apart from each other, although the fight over which is the original version may well continue. (See chart)

The GI tag, handed out by the central government’s Geographical Indication Registry, ties a product to a particular region in terms of origin and reputation as long as it possesses certain qualities and has been prepared in the method traditional to that place.

The cottage cheese-based sweet has been associated with popular culture and sentiments both in Odisha and Bengal. In 2015, during a verbal war between the two states over which was the sweet’s birthplace, Odisha had first expressed an intention to seek the GI tag.

But as its government dawdled, Bengal applied for the tag. In July 2016, scholar and journalist Asit Mohanty handed a 100-page document to the Odisha government claiming the sweet had originated in the state and urged it to fight for the GI tag.

When Bengal received the GI tag on November 14, 2017, chief minister Mamata Banerjee had tweeted from London: “Sweet news for us all.”

Mamata’s tweet added: “We are very happy and proud that Bengal has been granted GI status for Rosogolla.”

It was seen as a moral victory for Bengal, caused an uproar in Odisha and stung Bhubaneswar into action. The same day, the Odisha government issued a media release saying: “Rasagola, which originated in Odisha, has been offered at Jagannath Temple in Puri as a part of religious rituals since the 12th century by the Odias. Government is in the process of obtaining the GI tag for the Odisha Rasagola.”

The Odisha Small Industries Corporation Limited and Utkal Misthan Byabasyee Samiti moved an application for the GI tag on Odisha’s behalf on February 23, 2018. Odisha, however, did not challenge the GI tag granted to Bengal, deciding it would be a waste of time.

“Odisha Rasagola is very soft to feel, juicy and non-chewy in consistency and can be swallowed without teeth pressure. The Rasagola prepared in other places is circular in shape, milk white in colour and basically spongy and chewy in consistency,” the application said.

Mohanty told The Telegraph: “There has been historical and religious evidence that the Rasagola belongs to Odisha. When Lord Jagannath returns from his nine-day sojourn during the Car Festival, he is allowed to re-enter the Puri temple only after he placates his wife, Goddess Lakshmi, with rasagolas.”

He added: “The word ‘rasagola’ can be found in the 15th-century Dandi Ramayan and other scriptures which proves that the sweet belongs to Odisha.”

Ramkrushna Das Mohapatra, senior servitor at the Jagannath Temple, claimed the sweet had travelled from Odisha to Bengal.

“After the great famine of 1866 broke Odisha’s economy, thousands moved to Bengal. They included Brahmin cooks who took up employment with respectable Bengali families and made the sweet popular in Bengal,” he said.

Bengal’s GI application had said the rosogolla had been born as the granular danadar or ‘delta rosogolla’ which was modified into the soft, spongy rosogolla that was first seen in Fulia, Nadia, and later came to Bagbazar in Calcutta in the 1860s.

It rather lyrically ties the rosogolla’s emergence with the “golden age of Bengal” in the second half of the 19th century and the “glorious flowering” of its people’s “exuberant excellence”. It names confectioner Nabin Chandra Das as the inventor.

Some historians say that Das developed the “spongy rosogolla” in Bagbazar in 1868 after six years of experiment.

All the previous forms of rosogolla --- balls of cottage cheese dipped in syrup --- had a hard centre. Das was the first to come up with a ball that was soft all over, the historians say.

“Nabin Das invented a procedure that ensured not just that the ball did not disintegrate when boiled in a sugar solution but also that it remained soft and spongy,” said one of Das’s descendants, Dhiman Das, of KC Das Private Limited.

What the GI tag indicates, however, is that not every kneaded ball of chhana (cottage cheese) dipped in syrup that you buy in Bengal qualifies as Banglar Rosogolla.

Officials in the state food processing and horticulture development corporation, which had applied for the GI tag on behalf of Bengal, said the dumplings must be of pure chhana without a trace of semolina or white flour.

No starch can be added and the dumplings should weigh around 10 grams each. The GI tag specifications say the sugary syrup should be light and transparent with a sugar concentration between 30 and 40 per cent.

A sweet seller has to apply to an eight-member committee to check the product and certify it as Banglar Rosogolla.

In its report to the GI Registry in Chennai, Bengal had said that what differentiates its rosogolla from others’ is its “spongy character”, “soft, smooth” texture and “better cohesiveness” --- the extent of deformation it can withstand without rupturing.

Banglar Rosogolla may be soft but it’s no wimp --- its protein content is 7.56 per cent by weight, compared with 6.35 per cent of the versions made in other states.