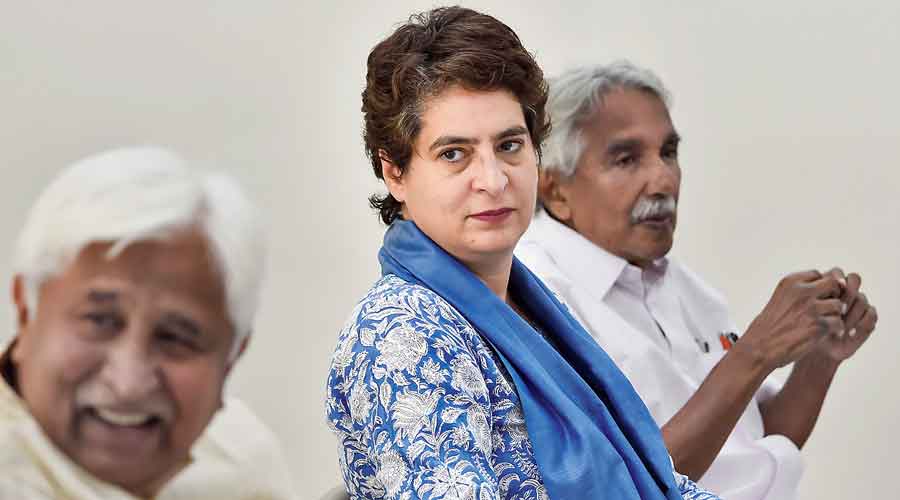 Priyanka Gandhi Vadra is among the Congress leaders who have made the tricolour their display pictures on social media
File Picture
PTI   |   New Delhi   |   Published 13.08.22, 02:41 PM

The Congress on Saturday attacked the government for not holding special functions at Parliament's historic Central Hall to mark the 75th year of Independence, and alleged the occasion has been reduced just to "glorifying the sarvagyaani".

"Sadly, nothing like that has been organised for the 75th anniversary, which has been reduced to an occasion to glorify the Sarvagyaani (one who knows it all)," he said.

The Congress and the BJP have traded barbs over initiatives marking the occasion of 75 years of Independence.

After Prime Minister Narendra Modi and several BJP leaders had made the 'tiranga' their profile picture on social media platforms, former Congress chief Rahul Gandhi, Congress general secretaries Priyanka Gandhi Vadra, Jairam Ramesh, among other leaders, and the party's social media accounts had put a photograph of India's first prime minister Jawaharlal Nehru with the tricolour as their display picture.

Hours after PM Modi appealed to people to strengthen the 'Har Ghar Tiranga' movement by hoisting or displaying the national flag in their homes between August 13-15, Gandhi had attacked the RSS, saying it "did not hoist the tricolour at its headquarters for 52 years", and people coming from that organisation are now talking about the tricolour's history and planning 'Har Ghar Tiranga' campaign.