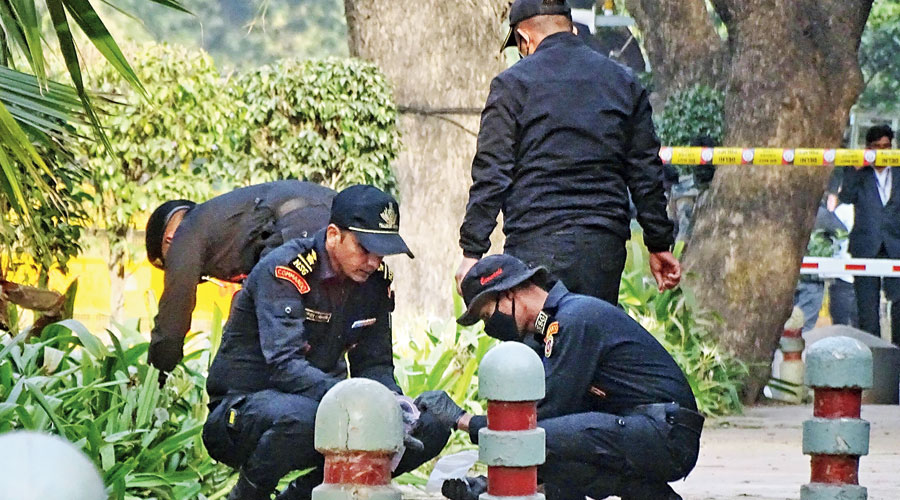 The Union home ministry on Saturday directed the National Security Guard’s bomb disposal squad to examine the explosives used in the low-intensity blast near the Israeli embassy in high security Lutyen’s Delhi.

Sources said investigators probing the “very low-intensity blast” were still groping in the dark and have so far not come across “anything concrete”.

“A probe is already in progress and nothing can be presumed now. It is too early to reach any conclusion. We are probing all angles,” a Delhi police officer said.

No one was injured in the minor blast that took place around 5.05pm on Friday while the Beating Retreat ceremony was underway at Rajpath barely 2km away. Windowpanes of three cars parked on a pavement were found to be shattered.

Sources in Delhi police said a purported white envelope addressed to the Israeli embassy and containing a handwritten note was found at the site of the explosion. The bomb was planted in a flowerpot on the pavement, police said.

Sleuths of the police’s special cell probing the blast again visited the spot on Saturday to collect more evidence. “Some ball bearings were found scattered near the blast site. The residues, including metallic swab and ball bearings, collected from the spot have been sent to the forensic science laboratory for examination,” said a police officer.

Officers probing the case, he said, have also scanned footage retrieved from the CCTV cameras installed in the neighbourhood and spotted a vehicle moving suspiciously near the embassy moments before the explosion.

The explosion took place on a day when India and Israel marked the completion of the 29th anniversary of the establishment of their diplomatic relations. Sources said the special cell was also probing any link to the 2012 explosion in which an Israeli diplomat’s wife was among the four persons injured after a magnetic bomb stuck to a vehicle went off in Delhi.

Delhi police’s spokesperson had said on Friday that initial impressions suggested a “mischievous attempt to create a sensation”.