Advertisement
Home / India / Not an inch on CAA: Amit Shah

Not an inch on CAA: Amit Shah 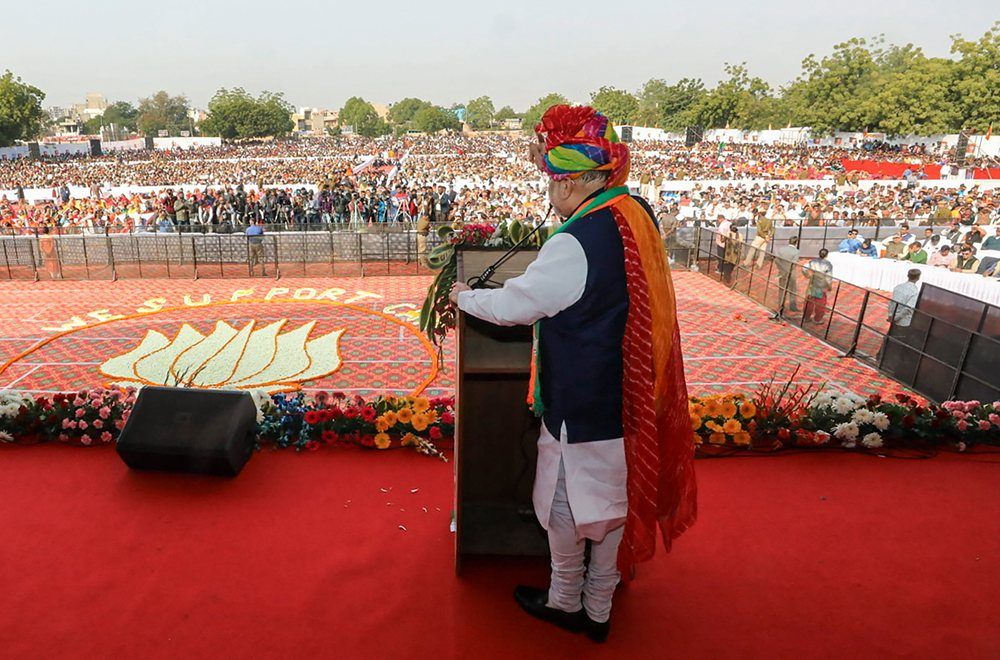 Amit Shah on Friday said “ek inch bhi wapas nahi jaayenge (we won’t backtrack even an inch)” on the Citizenship (Amendment) Act, iterating his firmness on the legislation as he geared up for a door-to-door campaign to exhibit support for the law in an effort seen as a majoritarian counter-offensive.

The BJP chief and Union home minister, who had earlier said he and his government were firm like a rock (“chattan ki tarha”) on the CAA, was on Friday addressing a rally at Jodhpur in Congress-ruled Rajasthan. In Delhi, the BJP announced a fresh campaign led by Shah, shaking off any sign of conciliation in view of intensifying protests against the “discriminatory” law and instead seeking to sharpen the divide.

The aggressive counter build-up is perceived to have been masterminded by Shah, who held a long meeting at the party headquarters on Wednesday.

“Rahul baba, if you have read the law, come and debate with me and if not then I am willing to translate it (the CAA) in Italian and give you,” the BJP president said, accusing the Opposition of spreading the “falsehood” that the amended law would take away citizenship.

“Yeh sab parties ekattha ho jaayen lekin ek inch bhi wapas nahi jaayenge (Let all these parties unite but we will not backtrack even an inch),” Shah told the crowd.

He, however, was silent on the NRC although he had earlier been pushing it aggressively.

The rally was organised by the BJP as part of the “janjagran (mass-awakening)” campaign launched by the party over the CAA. Many refugees who stand to benefit from the CAA were present at the rally and Shah assured them that the “56-inch-chest” Narendra Modi government would ensure they got Indian citizenship.

In Delhi party general secretary Anil Jain said the door-to-door campaign led by Shah would be launched in the capital on Sunday (January 5) to canvass support for the CAA.

“Amit Shah will be in Delhi to launch the campaign while all other senior leaders will follow it up in other cities,” Jain said, setting the target of reaching 3 crore families.

Although the BJP claims the campaign is to dispel falsehood being spread by the Opposition over the CAA, politically the effort appears to be an attempt to build a majoritarian offensive to counter the protests against the CAA and the NRC.

The BJP believes it enjoys the overwhelming support of the majority community over the CAA and the campaign led by Shah himself would be aimed at pitching the majority against the minority, which is opposed to the law.

In his speech Shah justified the campaign, saying that in a democracy the rulers too have the right to go to the people and present its version.

“Why are the Congress and the other parties opposing?” Shah asked. “The Congress is habituated to vote-bank politics. They are spreading falsehood and misleading the youths,” he said. “So we have decided that we’ll also go to the people and give our ‘paksh (version)’,” Shah added.

He exhorted the crowd to give a missed call on a particular number to show their support to the CAA, claiming it would directly reach “Modiji”. People will be asked during the door-to door campaign to place the missed call, and later the call volume will be displayed to showcase support for the citizenship law.

Jain said that as part of the drive, eminent people, including columnists and film and sports personalities, would be tapped.

At the Jodhpur rally, Shah repeated all the ideologically driven contentious decisions of the Modi government, underlining how the Congress and Rahul Gandhi had opposed them.

Shah named Article 370, the construction of a grand Ram temple, the Balakot airstrikes, the surgical strike and instant triple talaq, and each time asked the crowd whether it was the right decision and added that “the Congress and Rahul baba” had opposed them.

“In JNU slogans of ‘Bharat mata tere tukde honge…’ were raised and the Congress supported them,” Shah said, continuing with the effort by the BJP to paint the Congress as anti-India.