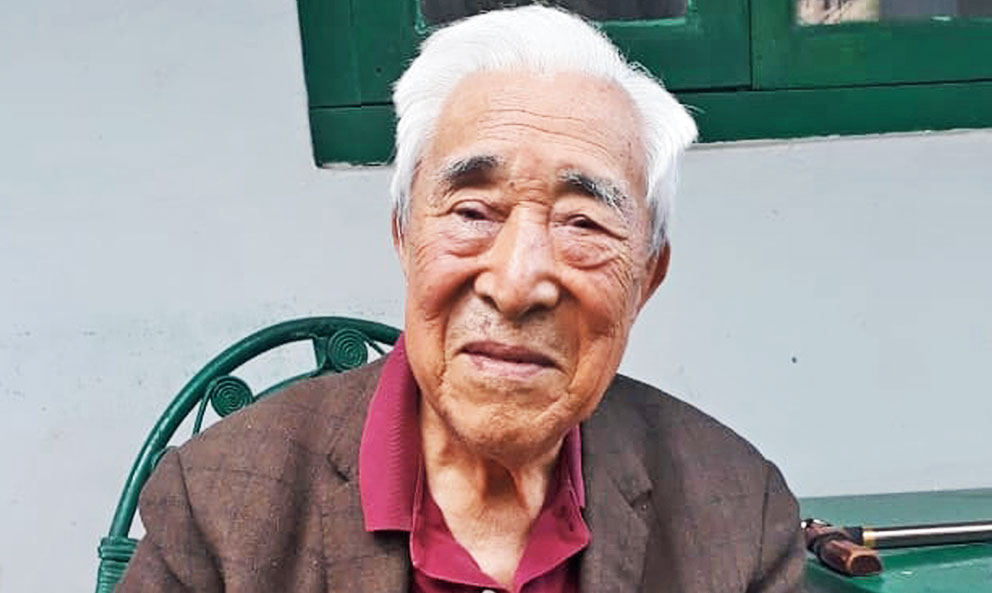 Gyalo Thondup, the Dalai Lama’s brother whose noodles factory burnt down here on Saturday, had learnt to make the strips of flour paste from his mother at the age of five at his native village of Taktser in Tibet.

Thondup, now 90, fled Tibet in 1952 and played a key role in establishing links between the Tibetan government in exile and the wider world, acting as the Dalai Lama’s interlocutor with leaders such as Jawaharlal Nehru, Chiang Kai-shek, Zhou Enlai and Deng Xiaoping.

It was he who secured then Prime Minister Nehru’s assent to political asylum for the Dalai Lama when the younger brother fled from Tibet to India in 1959.

But he never gave up making noodles.

“I bought this three-acre plot in Kalimpong in 1963 for Rs 7,200 and started the factory in 1967, and I have been making noodles as this is all I know,” Thondup told The Telegraph.

He named the premises at Kalimpong’s 8th Mile, where his house too stands, as Taktser House after his village.

Thondup had retired for the night around 7.30pm on Saturday only to be woken by the fire. His residence was untouched but the wood-and-brick factory have to be rebuilt.

“With the fire, many (of my) memories of Darjeeling, Kalimpong, Tibet, India and the rest of the world has gone,” he said on Sunday.

Thondup has co-authored a book, The Noodle Maker of Kalimpong: The Untold Story of My Struggle for Tibet, with the American writer and researcher Anne F. Thurston.

“I did not suggest the name, the publishers did. I have no complaints but I would have titled it ‘Blood and Tears’,” he said.

Thondup, third among six siblings — the Dalai Lama, the fifth, is five years younger — has served his country and community in important ways.

He had learnt Chinese in Beijing, where his family and local community had sent him for his primary education. “I learnt English during my stay in Darjeeling,” he said.

After the Chinese entered Tibet in 1951, Thondup realised they would “do no good” for his country.

“I took my mother and one of my brothers into confidence and decided to establish a link with (then Indian Prime Minister) Nehru through an Indian official, S. Sinha, in Lhasa,” he recalled. “We did not tell His Holiness.”

He added: “The Chinese wanted me to attend a Chinese Youth Congress in Beijing and then be a part of a youth delegate to Vienna, Austria. I promised Mao I would attend the conference after visiting south Tibet.”

Once in south Tibet, Thondup fled the country and entered Tawang in Arunachal Pradesh after a 17-day trek. From India — where he has always been based in the Darjeeling Hills — he established links with world leaders.

When the Dalai Lama slipped out of Lhasa in 1959 with the objective of fleeing to India, Thondup was not absolutely sure of the details.

“Later I got information that he was safe in south Tibet. Then I went to meet Jawaharlal Nehru at his office in Parliament House to seek political asylum for His Holiness,” Thondup said.

Thondup had met Nehru during a visit to India in 1949 — during which he came to Calcutta too — as a representative of the Dalai Lama.

After the Dalai Lama too entered India through Tawang in 1959, Thondup travelled to Tezpur in Assam to meet him.

Did the Dalai Lama also learn to make noodles? “No, he was identified (as a reincarnate) at the age of three. He, however, loves noodles,” the elder brother smiled.

Thondup plans to start rebuilding his factory “after a few weeks”. The factory, which employs between 12 and 20 workers, produces 300 to 400kg of noodles every day.