No option but repeal, say farmers 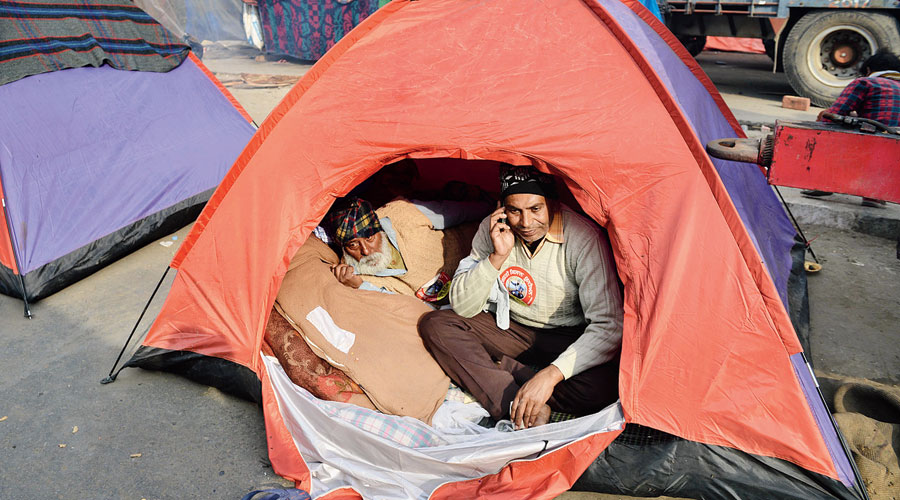 The farmer unions on Thursday said there was no alternative to repeal of the new farm laws, responding to the government’s call to come up with an option short of complete withdrawal.

Simultaneously, upset with the “repression” of farmers in BJP-ruled states, the All India Kisan Sangharsh Coordination Committee (AIKSCC) decided to counter this with a bigger mobilisation.

“The Government of India’s appeal to the farmer leaders to suggest an alternative to repeal of the three acts is an impossibility as the central government itself has thrust these laws over the people undemocratically,” the AIKSCC’s working group said a day after 40 farmer unions and collectives had met government interlocutors.

Further, it said, the government should stop being rigid and indulging in semantics as all the processes were in its hands.

“Unless these (laws) are repealed there is no scope to discuss pro-farmer changes in mandis (wholesale markets) and farm processes for ensuring ‘doubling farmers income’,” the AIKSCC said in a statement while the mobilisation continued uninterrupted.

New Year’s Eve brought in more people from Punjab, in particular, to the protest sites at Tikri and Singhu. Some of the protesters at Shahjahanpur on the Haryana-Rajasthan border forced their way past the barricades, prompting Haryana police to use teargas to hold them back.

The AIKSCC said it stood vindicated by the manner in which 22 farmers in BJP-ruled Madhya Pradesh had been swindled out of Rs 2 crore when they “parted with 2,581 quintals of lentils to two traders of Harda” under the Farmers’ Produce Trading and Commerce (Promotion and Facilitation) Act, 2020, one of the laws the protesters want repealed.

The two traders had approached the farmers directly citing the FPTC Act, offered them more than the mandi rate and paid by cheque, which bounced. The two traders are untraceable and a probe is on.

Also, the AIKSCC said, the government’s assurance that the minimum support price regime would continue under the new farm laws was nothing but a “pretentious promise”.

It said the Telangana government had stopped procuring paddy on the ground that the Centre had refused help and told it to stop procurement.

“Senior central ministers’ emotional appeals for faith in Modi’s promises are now exposed for being hollow,” the AIKSCC said.

Kavita Kurunganti of the Mahila Kisan Adhikar Manch told The Telegraph the government had painted itself into a corner by escalating the defence of the three laws, under the Prime Minister’s leadership, and through the parallel attempts to discredit the farmers’ movement.

“By its own actions, the government has made it difficult for itself to concede (the farmers’ main demands). It’s not as if we have changed our goalposts — for the past six months the farmers have been demanding repeal,” she said.

True to the feistiness of Punjab’s people, — farmers from the state are leading the protests that have now spread to other parts of India — the agitators have not let the government’s stubbornness or the bitter cold dampen their spirits on New Year’s Eve.

Large numbers of people from back home have joined them with the slogan “Nava saal, kisana de naal (New Year with farmers)”. The agitators are looking forward to welcoming people from Delhi and nearby areas to the protest sites on Friday to share a meal at the langars of the “annadatas” (food providers or farmers).