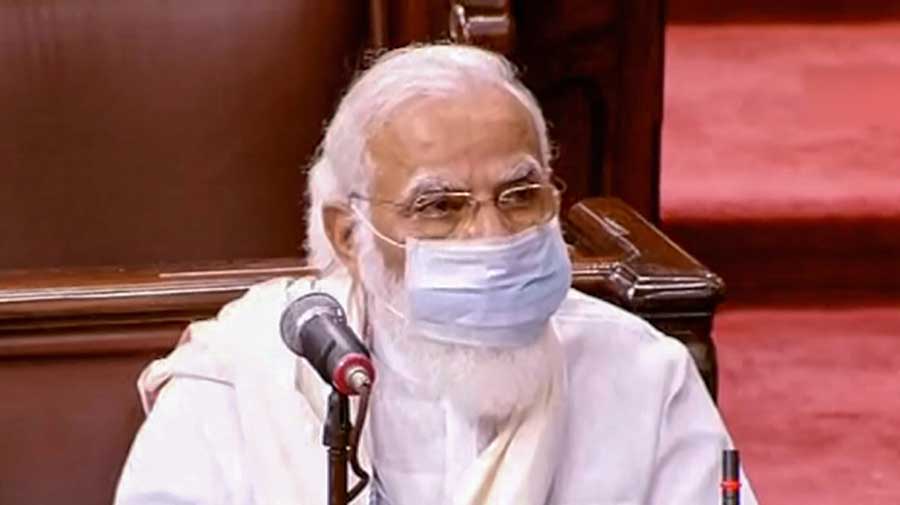 Prime Minister Narendra Modi on Monday said on Parliament premises that he believed that MPs would “with one voice” express solidarity with the soldiers guarding the borders. Modi mentioned neither China nor the LAC.

A little later in the Lok Sabha, Speaker Om Birla refused to allow Congress House leader Adhir Chowdhury to broach the border standoff with China. “No, no,” the Speaker said before Chowdhury’s mic was switched off.

In the evening, it became apparent that the “No, no” applies only to the Indian Parliament. 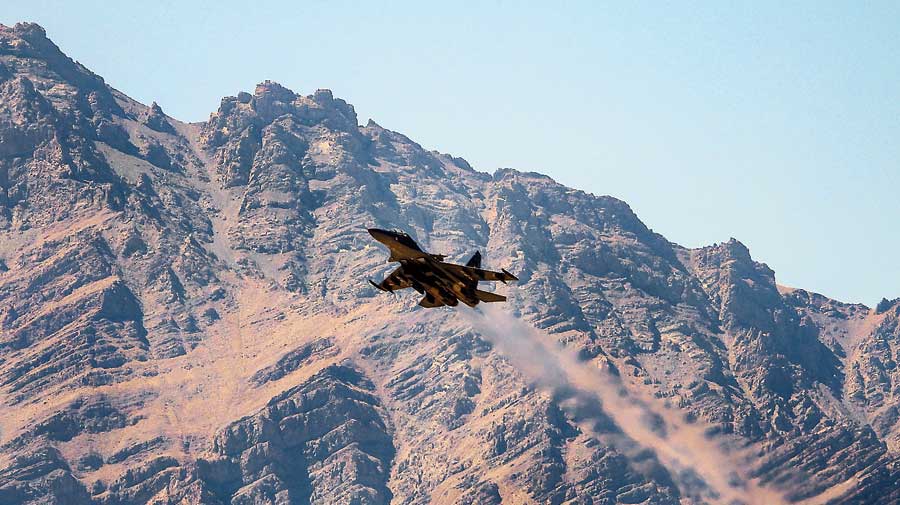 An IAF Sukhoi Su-30 jet flies over the Ladakh region on Monday.
PTI

Sitting in the Indian capital, Chinese ambassador Sun Weidong used India’s own accounts as evidence of Indian troops “illegally trespassing” the Line of Actual Control (LAC) and iterated that “it is also important to move back all personnel and equipment that have trespassed”. Sun’s comments came in an embassy release that listed his answers to questions (who asked them is not clear).

Had a discussion in Parliament been allowed, the Opposition would have latched on to the Prime Minister’s no-incursion remark of June 19 to corner the Centre.

Prime Minister Modi set the official tone while delivering his customary speech on Parliament premises before the Lok Sabha session opened at 9am.

He did not name even the “hilly terrain” — Ladakh, where Chinese troops have entrenched themselves within India-claimed territory at multiple places and are locked eyeball to eyeball with Indian soldiers.

“The faith with which they are standing to protect the motherland, this House too, each of its members, with one voice, one emotion, one feeling, one resolve, will send out the message that the country stands behind its soldiers,” the Prime Minister said.

Adhir tried to raise the border issue during Zero Hour, saying: “Sir, through you I want to draw the attention of the government, the defence minister of the country that for some months the people of India are in deep stress because on our border....”

That was as far as he got before the Speaker cut him off with the firm “No, no”.

Birla said the issue would first be discussed in the business advisory committee, which includes members of different parties and the government and decides the business of the House.

Adhir again pleaded his point, underlining that a newspaper had on Monday reported about purported surveillance of Indian leaders by a Chinese company. But the Speaker again restricted him. Defence minister Rajnath Singh was in the House at the time but Modi wasn’t.

Because of the strict Covid-19 guidelines, Adhir couldn’t even stand up and protest. During this unusual session, the members have to speak seated and are barred from rushing into the well to protest.

Government sources said that if the Opposition continued to press the Centre on the border standoff, Rajnath might make a statement in the House but there would be no discussion.

Asked about Modi’s comment, Congress member Shashi Tharoor said: “Of course we are united and standing in support of our soldiers, but the government is accountable to Parliament, to tell us what’s happening. The nation needs to know and Parliament has to be taken into confidence.”