No campaign against Sonia or Rahul Gandhi: Ghulam Nabi Azad

‘Have demanded internal elections, not a change of party leadership’ 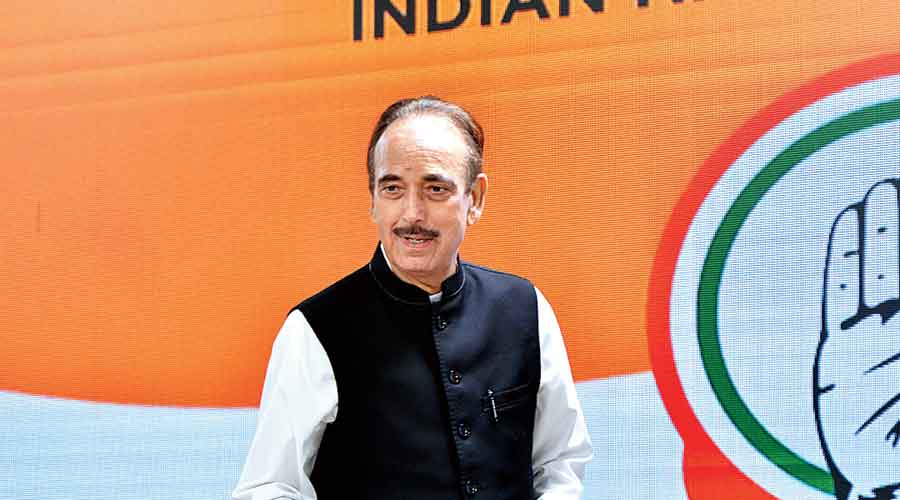 Congress veteran Ghulam Nabi Azad on Sunday asserted that there was no campaign against Sonia Gandhi or Rahul Gandhi and that the issues raised by some leaders were only structural, aimed more at revitalising the enervated organisational machinery than replacing the leadership.

Azad told The Telegraph in an interview: “We are only worried about the Congress’s decline. No other party can be a national alternative to the BJP as only the Congress has national thinking and national presence. We haven’t demanded a leadership change. Our key suggestion is internal elections; from the block to state and national levels. Elections should also be held to the Congress Working Committee (CWC).”

Asked why he and other senior leaders who raised the demand for internal elections in a letter to Congress president Sonia earlier were oblivious to this critical aspect of the party system, Azad said: “I have always been a votary of election to organisational posts. When P.V. Narasimha Rao was the party president and Prime Minister, I was the most vocal for internal elections. Leaders like Sharad Pawar, K. Karunakaran, Madhavrao Scindia supported me.”

Pressed further on why he and other senior leaders didn’t demand organisational elections during Sonia’s tenure from 1998 to 2017, Azad chose to delve into history instead of giving a direct answer.

“I told you I am always for internal elections at all levels. I have expressed my views at party forums. Rao allowed elections to the CWC at the Tirupati session in 1992. But he kept deceiving us on elections at other levels. Finally, the lack of confidence in his leadership was manifested and he was removed,” Azad said.

This is significant as Azad appeared to be hinting that internal elections can be an issue serious enough to remove the party president without clarifying why they were comfortable with the nomination system during Sonia’s tenure.

Reminded that all these senior leaders had been calling the shots during the period between 1998 and 2016, Azad, who is the leader of the “Group of 23” who have written to Sonia shot back: “We were part of the leadership structure during Rao’s tenure as well. But the president has to allow internal elections.”

Asked about the “rebel” tag pasted on his chest although he had been known as a loyalist all his life, the leader of the Opposition in the Rajya Sabha said: “That’s a wrong perception being mischievously manufactured. We are not rebels. When a wazir (high noble) breaks the army and challenges the king, he is called a rebel. But it is incumbent on a good wazir to give the correct advice to the king. We are doing the same, giving the correct advice to the leader.”

Asked if that means the projection of the crisis as a rebellion against the Nehru-Gandhi family was erroneous, Azad said: “Of course. It is not a fight against any individual. We are not for replacing the leader or appointing somebody as the leader. We are only doing our job of telling the leader what could have gone wrong and what could be the possible remedies. We want the leader to save the party and that will also save all of us, including the leadership.”

Asked if this debate could have been conducted within the party forums, Azad insisted that they wanted it to be that way and none of the leaders had spoken a word against Sonia or Rahul.

That the party is weak and the organisation has to be strong is an indisputable fact and pointing this out can’t be rebellion, Azad insisted. Ordinary party workers across the country agree with the points the “Group of 23” have raised but feel aggrieved by the unseemly public discourse about the Congress leadership and its infirmities.

Most Congress workers lament that no attempt has so far been made to ensure the public sniping is stopped and all the leaders sit together to draw up an effective action plan for revival.

Ironically, while most party workers are anguished by the leadership crisis, very few are willing to look beyond the Nehru-Gandhi family for the next party president.

Reshuffle in Congress without vengeance

Azad and others dropped as AICC gen sectretaries