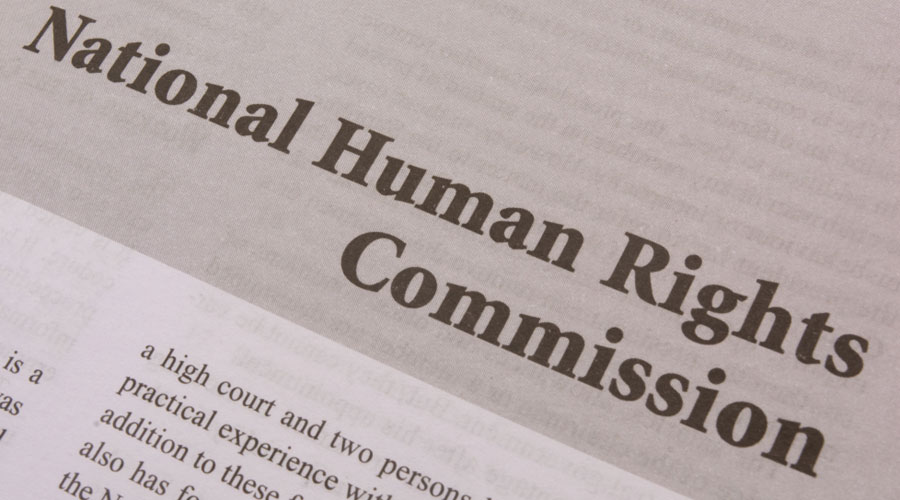 Taking suo motu cognisance of news reports, NHRC chairperson and former Chief Justice of India H.L. Dattu directed issuance of notice to the home secretary and ministry of home affairs, calling for their comments on the allegations levelled by Amnesty International that the complete freezing of its India bank accounts has halted all the work in which it has been engaged in the country.
Shutterstock
Our Legal Correspondent   |   New Delhi   |   Published 02.10.20, 04:59 AM

The National Human Rights Commission (NHRC) on Wednesday sought an explanation from the ministry of home affairs over the Centre’s decision to freeze the bank accounts of Amnesty International, bringing all its human rights activities across the country to a halt.

Taking suo motu cognisance of news reports, NHRC chairperson and former Chief Justice of India H.L. Dattu directed issuance of notice to the home secretary and ministry of home affairs, calling for their comments on the allegations levelled by Amnesty International that the complete freezing of its India bank accounts has halted all the work in which it has been engaged in the country.

“The commission has carefully examined the contents of the news report. The Amnesty International is a reputed non-governmental organisation raising its voice globally whenever there is an incident of violation of human rights. The allegations levelled by the organisation are serious in nature and have been strongly answered by the government agency.

“Any kind of difference of opinion may be a subject of investigation and decision by the competent court. The commission finds it necessary to go through the matter, analyse the facts and reach a conclusion in the interest of human rights friendly environment in the country,” the NHRC said, while seeking the government’s response within six weeks.

In a statement on Tuesday, Amnesty International had said it has been compelled to let go of staff in India and pause all its ongoing campaign and research work. It was alleged that this is the latest in the incessant witch-hunt of human rights organisations by the Government of India over unfounded and motivated allegations.

Amnesty International had claimed that on October 22, 2019, it had testified at the US Congressional hearing on human rights in South Asia, with specific focus on Jammu & Kashmir after the Indian Parliament on August 5, 2019, pushed through constitutional changes that divested Jammu & Kashmir of its special status and reorganised it into two Union Territories.

On August 28, the rights group released an investigative brief on the alleged complicity of Delhi police in communal riots in the national capital in February 2020. Amnesty International had claimed that 53 people had died in the riot while Delhi police rebutted the claim, saying the report was lopsided, biased and malicious.

Amnesty International has reportedly accused the government of suppressing the speech and demanded the release of activists Rona Wilson, Shoma Sen, Sudha Bhardwaj, Surendra Gadling and others who were arrested in connection with the January 2018, caste clashes in Bhima-Koregaon near Pune.

It is also mentioned in the news report that this is the fifth time when Amnesty International is closing down its office in India.

The Union home ministry had, however, rejected the allegations saying the   stand taken by the Amnesty International is unfortunate, exaggerated and far from the truth.

The organisation has been accused of Foreign Contribution Regulation Act (FCRA) violations, and “interference in domestic police debates” despite being funded by foreign donations.

The rights group has reportedly denied the financial violations charges and has said they have been in full compliance with all laws.

It also said the Enforcement Directorate (ED) has been investigating the rights group since October 2018, when they raided its office in Bangalore and the accounts of the organisation were frozen.

In 2019, the income tax department wrote to the office bearers of the organisation seeking their clarifications on the subject. It is also mentioned that in November 2019, the CBI has filed a case against the Amnesty International alleging that it has received Rs 36 crore in funding without the mandatory permission required under the FCRA.

The investigative agencies have also reportedly alleged that the fund raising model of Amnesty International India was in violation of the FCRA that amounts to money laundering.

The organisation has also been blamed for their activities, which are in clear contravention of laid down Indian laws.

The organisation has reportedly stated that their harassment by the government is a result of their unequivocal calls for transparency in the government, more recently for accountability of Delhi police and the Government of India regarding the grave human rights violations in Delhi riots and in Jammu & Kashmir.

The charges of the organisation have, however, been denied by the BJP alleging that the organisation was raising funds from abroad in contravention of the Indian laws. They have also stated that there has been shifting money transfer to the companies and there is suspected flow of money into the trust of Amnesty International.