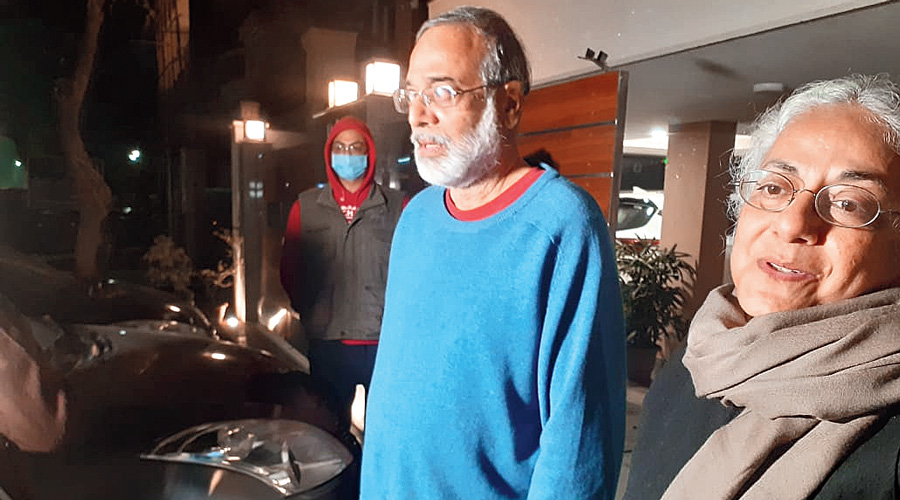 The Enforcement Directorate’s NewsClick-related searches ended after 113 hours at the home of its 73-year-old editor-in-chief Prabir Purkayastha on Sunday around 1.30am.

Raids on the investigative news site, that faces a Rs 100-crore defamation suit by the Adani group and has extensively covered the farmers’ protests, started at several locations in the capital on Tuesday morning.

Eight officers wound up the raid at the South Delhi apartment where Purkayastha lives with 67-year-old author Githa Hariharan. After the officials left, Purkayastha thanked civil society and journalists for their support.

He told reporters waiting outside: “We are not interested in being the news, we want to cover what is happening, what the news is. And this (the raid) is something that we will take the way it is meant to be taken. This will not stop us. We will continue to do what a news organisation should do, which is cover people’s issues and take positions.”

The ED is yet to explain why the raid took so long or why  the two senior citizens were confined. Their two sons, who live elsewhere in the capital, were allowed to visit under the supervision of the ED. Hariharan was allowed to attend an online literature festival on Saturday. The ED is also yet to publicly reveal its findings and charges, if any.

Purkayastha said: “It is one of the longest raids that I know of by the ED. Basically, it seems to be that I have a lot of emails. I am an old email user, since 2005, of gmail. It seems I had too much for them to take down quickly.”

A source confirmed that the officials had largely been copying email and other electronic data from devices at the home since Thursday. Purkayastha is expected to be called to the ED headquarters this week.

Some NewsClick shareholders and their families whose homes were searched have also faced tangential remarks or queries on their links to the CPM, the farmers’ protests, and jailed rights activist Gautam Navlakha who was associated with the website. Several of them, like Purkayastha who was jailed during the Emergency, are members of the party.

On Friday, NewsClick described news reports of alleged illegitimate financial transactions as a “selective leak of misleading facts”. “Nothing but a malicious attempt to smear the image of Newsclick and discredit our journalism.”

The Left and the Congress had condemned the raids. On Saturday, former Union minister Yashwant Sinha tweeted: “Raid on NewsClick Editor’s house has gone on for 80 hours. Can there be a worst example of govt’s attempt to gag the media. Yet even the media is quiet. Are you afraid your turn will come sooner than later? Stand up and be counted.”

Congress MP Karti Chidambaram also tweeted: “How many will this @BJP4India regime try to silence & intimidate via it’s favourite agency @dir_ed? Where is the collective outrage among the media fraternity? The media won’t even stand up for one of its own?”