Out: Secularism In: Gita ideal 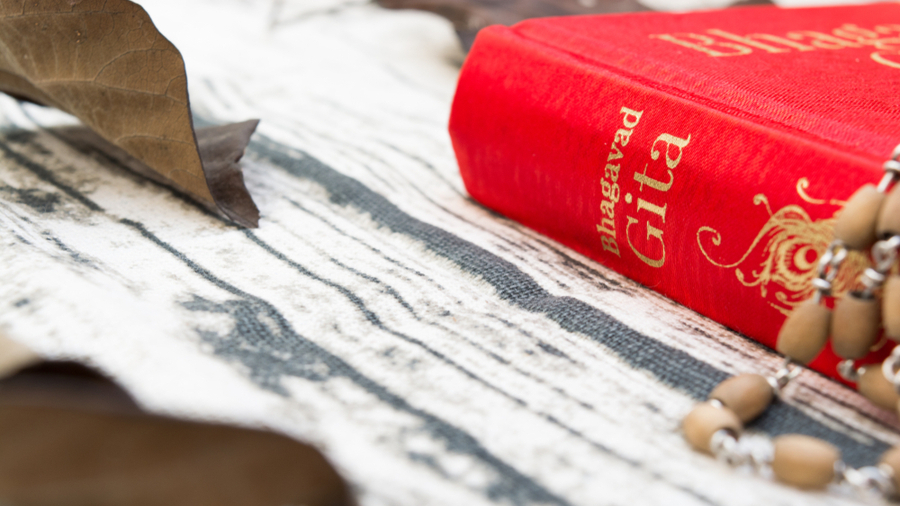 Nishkam karma, which means selfless or desire-less action done from a sense of what is right rather than with an eye on the consequences, is part of the advice Krishna gives Arjun in the Bhagavad Gita.
Shutterstock
Basant Kumar Mohanty   |   New Delhi   |   Published 02.08.20, 03:46 AM

“Secularism” finds no mention in the new National Education Policy’s statement of vision and purpose but the ideal of “nishkam karma” or selfless action promoted by the Bhagavad Gita does.

Selfless action in itself may be a laudable ideal but cherry-picking phrases from one religion promoted by the ruling establishment in a land of multiple faiths has raised eyebrows.

Several academics said the policy reflected the ideological shift from the Nehruvian idea of a secular and liberal nation towards belief in a more muscular nationalism and duties towards a “strong State” that has been visible on the ground over the past half a decade.

N. Sukumar, a political science professor with Delhi University, emphasised that the omission of “secularism” was significant at a time of increasing attacks on the minorities.

The new policy, announced on Wednesday, does refer to justice,

liberty and equality — also part of the Preamble — and says its goal is to produce citizens who would build an “equitable, inclusive, and plural society as envisaged by our Constitution”.

It says it wants to develop among the students “a deep sense of respect towards the Fundamental Duties”, but makes no mention of the Fundamental Rights. A deeper emphasis on citizens’ duties than on their rights is often associated with proponents of “strong”, authoritarian governments.

The policy moves to and fro between constitutional and “traditional Indian” concepts, saying: “Traditional Indian values and all basic human and constitutional values (such as seva, ahimsa, swachchhata, satya, nishkam karma, shanti, sacrifice, tolerance, diversity, pluralism... respect for all people and their inherent capabilities regardless of background... patriotism, democratic outlook, justice, liberty, equality, and fraternity) will be developed in all students.”

Nishkam karma, which means selfless or desire-less action done from a sense of what is right rather than with an eye on the consequences, is part of the advice Krishna gives Arjun in the Bhagavad Gita.

Both “secularism” and ‘socialism” featured in the previous NEP of 1986. The terms “socialist” and “secular” were incorporated into the Preamble to the Constitution in 1976 during the Emergency when Indira Gandhi was in power.

Although Nehru himself was committed to secularism, the word was not included in the original Preamble to the Constitution because of an intense debate over whether the European concept of keeping the State and religion separate could be transplanted in that form in India.

The NEP of 1986 said: “Education... refines sensitivities and perceptions that contribute to national cohesion, a scientific temper and independence of mind and spirit — thus furthering the goals of socialism, secularism and democracy enshrined in our Constitution.”

The previous NEP, of 1968, too spoke of “realising ideals of socialistic pattern of society”. While it did not mention ‘secularism”, it stressed the protection of the minorities’ rights and their education.

Even the first avatar of the latest education policy had a fleeting brush with “secularism”. In 2015, the Narendra Modi government had set up a committee headed by former cabinet secretary T.S.R. Subramanian to draft the education policy.

In 2016, the TSR panel submitted a draft policy that said “education should foster peace, tolerance, secularism and national integration”.

But the draft policy was not accepted by the Centre, which decided to use it as an input for a new draft. When the subsequent Kasturirangan committee submitted its report last year, it did not use the words “secularism” and “socialism”. The new NEP is largely based on the Kasturirangan report.

A petition was moved in the Supreme Court last week seeking removal of both terms from the Preamble on the ground that they were “antithetical to the constitutional tenets as well as the historical and cultural theme of India”.

While socialism has lost much ground in the world and has been reduced to an occasional slogan in India, the concept of secularism has assumed a sense of urgency with majoritarianism and its ripples sweeping the national landscape.

Referring to the new education policy’s nod to an “equitable, inclusive, and plural society”, Sukumar, the DU professor, sought to draw a distinction between “plural” and “secular”.

“Secularism means the absence of discrimination on the basis of religious faith. Pluralism is a broad term used to mean diversity of language, culture, religion and race. ‘Pluralism’ dilutes the idea of ‘secularism’, which is focused on religious equality,” he said.

“The threat to religious minorities has increased in recent years. Pluralism is not enough to create a fellow feeling among citizens from different religions.”

Asked about the document's silence on the Fundamental Rights, Sukumar said: "Without the right to free speech, cultural and religious freedom, education, health and employment (rights), you cannot achieve constitutional values like liberty, equality and justice."

Harish Wankhade, an assistant professor with the Centre for Political Studies at Jawaharlal Nehru University, said the decision to drop "socialism" and "secularism" marked the current government's "ideological shift" from positions taken by past Congress governments.

"The NDA government wants to send out a message that these ideals are no longer important," Wankhede said.

"It's very important for the education policy to reflect the ideals of secularism and socialism. But they don't go together with the policies of privatisation and 'cultural nationalism' (being implemented on the ground), so the policy dropped these terms."

J.S. Rajput, former director of the National Council of Educational Research and Training and member of one of the committees that helped draft the new NEP, defended the omission of "socialism" and "secularism". He insisted that the policy was committed to the Constitution.

The omission of "secularism" and "socialism" is "a tribute to the wisdom of the great illustrious members of the Constituent Assembly of India", he said.

"We must accept that 'secularism' is an inbuilt tradition of life. It has entered into the home of every Indian," he said.

"The terms 'socialism' and 'secularism' were introduced into the Preamble by a most 'captive' Parliament of India -by a dictatorial Prime Minister who had put all the Opposition leaders in jail. This was one of the unethical steps taken during the Emergency. The term 'secularism' has been used for politics by certain elements."

The same 42nd constitutional amendment that inserted "secular" and "socialist" into the Preamble also laid down the Fundamental Duties for citizens.

Rajput said the UPA government's policies had not reflected socialism, either.

He defended the reference to nishkam karma. "If people learn to work and serve without undue expectations, the man-nature relationship will be re-established," he said.