Many wanted to banish the 'enemies of humanity' to the moon 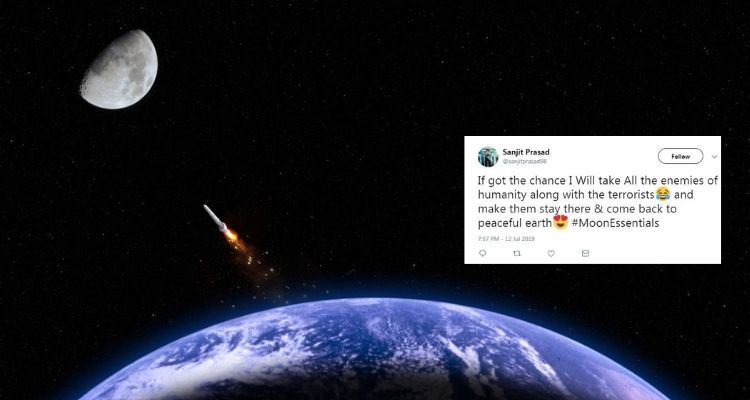 In the run-up to the launch on Monday of India’s second moon mission, Chandrayaan-2, the Indian Space Research Organisation (Isro) launched an interesting quiz on Twitter. The space agency asked its followers to name the things they would take to the moon if they had the chance.

Soon after Isro’s tweet, #MoonEssentials began trending on the social media platform with people naming those things that they thought would be essential for life on the moon.

The one thing that seemed to be on every Netizen’s mind was the Tricolour. Some wanted to take a moonwalk, while others said they would want to carry a scoop for bringing back moon water.

Isro acknowledged the responses in a series of tweets:

Here are some #MoonEssentials that our followers — Paras Garg (Uttar Pradesh), Ganesh Ji (Allahabad), and @md_safi_shamsi— would take with them on their lunar journey. Kudos to Mohammed who aims to be the first astronaut to fly a drone on the Moon! pic.twitter.com/DjRjJmoTeb

Your #MoonEssentials lists keep coming in and how! Here are a few more interesting answers from Dhurai Rajiv Gandhi (Madurai), Rahul Kundu, and @IDeserveSomePie –– we love how all of you have scientific inclinations. Anything more you'd add? #Chandrayaan2 #GSLVmkIII #ISRO pic.twitter.com/GZXjBHes9I

Our third set of #MoonEssentials from –– @harshroy24 (Bihar), Rohan Yadav (Baramati), and Afroz Ahmad (Ramagundam) –– features a re-entry vehicle an essential component for manned space missions. What else would you take to the #Moon?#Chandrayaan2 #GSLVmkIII #ISRO pic.twitter.com/RdkQbXitkL

Here are some popular answers from our #MoonEssentials quiz — sent in by Ganesh Gns (Visakhapatnam), Chiranjit Bhattacharjee (Kolkata), and @shaltiwari (Mumbai). A special shout out to Shalini for thinking of our scientists too. pic.twitter.com/suYmOLxd33

Some of the responses were political:

Take this guy and leave him there pic.twitter.com/Gl50WLEtv6

Others, like Ayush Kumar Choudhary, displayed their patriotism while taking the Isro quiz:

#MoonEssentials @isro
I would like to carry -
1. National flag
2. Portrait of Sir A.P.J Abdul Kalam
3. Collage portrait of our freedom fighters
4. My dream is to hoist our National flag and play our National Anthem on surface of moon
Jai Hind 🇮🇳

#MoonEssentials
Here are some suggestions from my side☺️
1. Holy water of Ganga
2. Indian flag https://t.co/e43Azxc3vR

Many wanted to banish the “enemies of humanity” to the moon:

And, of course, the jokes quickly followed:

(my parents think we dont belong to earth)#ByeByeEarth 🌍

Chandrayaan-2 will be launched from the Satish Dhawan Space Centre at Sriharikota, Andhra Pradesh. It will head to the moon's south polar region. The earlier Chandrayaan mission was launched almost 10 years ago.