Arnab Goswami’s Republic News Network issued a statement on Sunday night after Pakistan sought to milk a controversy, citing chats attributed to him 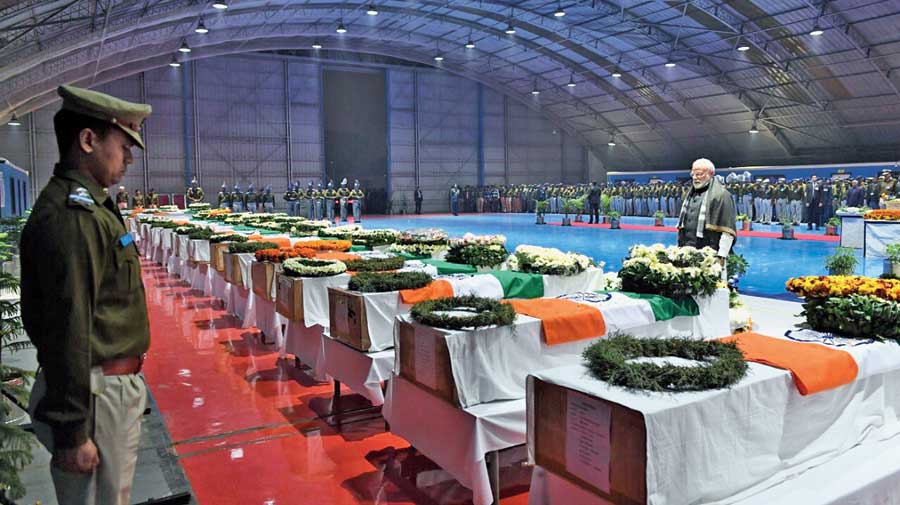 Picture tweeted by Prime Minister Narendra Modi on February 15, 2019, shows him standing before the coffins of soldiers killed in the Pulwama attack. Forty Indian soldiers lost their lives on February 14, 2019, in a bombing suspected to have been engineered by Pakistan. Less than three hours later, a purported WhatsApp message from Arnab Goswami said: “This attack we have won like crazy.”
Twitter/@narendramodi
Our Bureau   |   New Delhi   |   Published 18.01.21, 01:34 AM

Pakistan has prompted Arnab Goswami’s Republic TV to end a 48-hour silence on its boss but the nation still wants to know who “NM” and “AS” are.

The purported chats quote Goswami as saying “this attack we have won like crazy”, presumably referring to his channel’s coverage and ratings, less than three hours into the Pulwama massacre in which 40 CRPF jawans died. The chats attributed to Goswami also say three days before the Balakot air strikes that the government would respond in such a way that “people will be elated”.

Goswami had not responded to questions from Indian news media on the authenticity of the chats that became public on Friday and the identity of “NM” and “AS” — two abbreviations that figure in the messages about getting things done.

On Sunday night, Republic Media Network confined itself to lecturing Pakistan and the Congress party in India. “Goswami exposed every sinister design, and evil intention of the Government of Pakistan and the ISI,” it said.

“As the days pass, we will expose this conspiracy…,” the 267-word statement added.  It urged the Congress to stop working in tandem with the Pakistan government, consciously or unconsciously, to spread lies against India’s interests.