Modi arrived at Kevadiya in Gujarat for the Namami Narmada festival, celebrated by the state government to mark the filling up of the Sardar Sarovar Dam to its maximum level of 138.68m 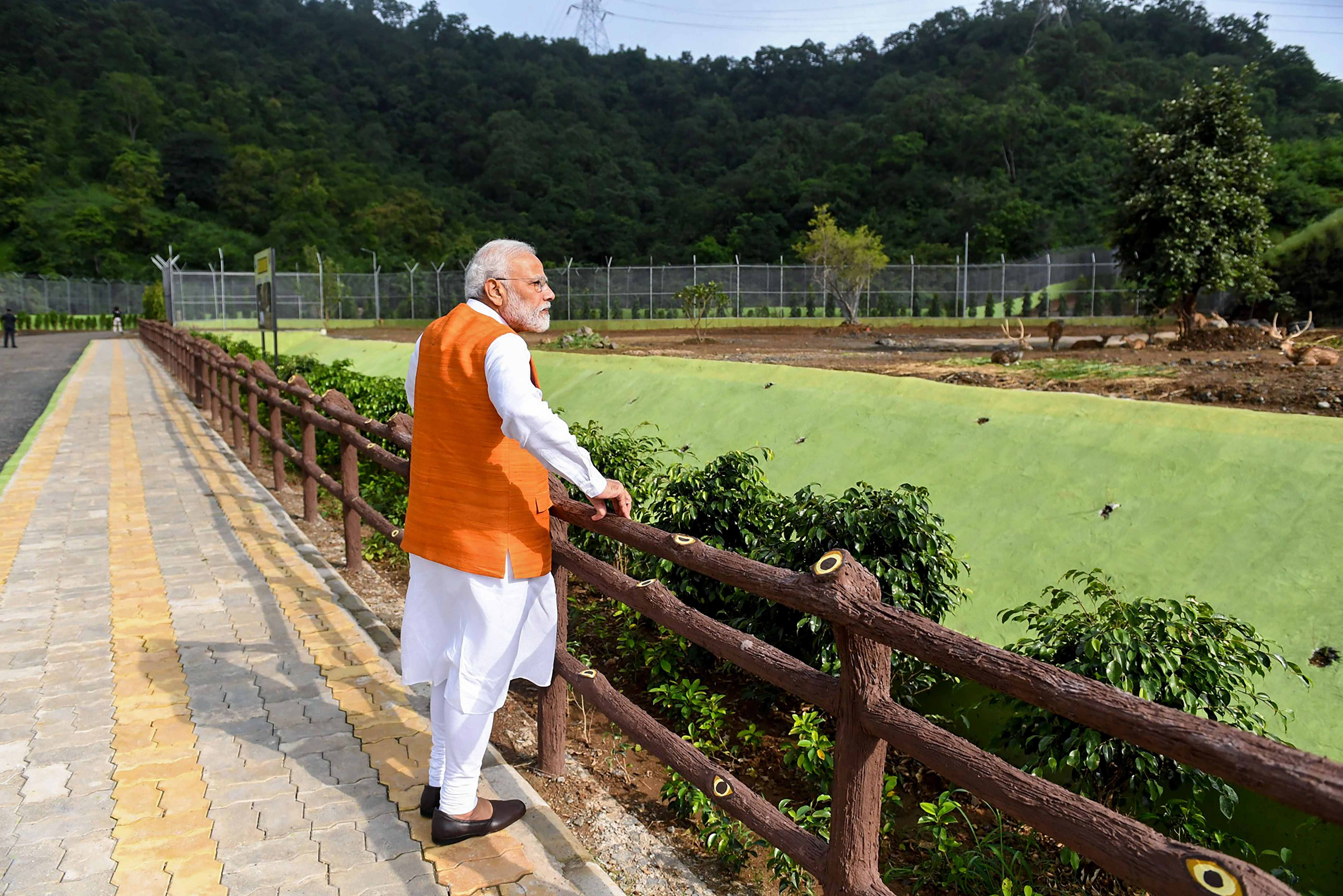 Earlier this month, Madhya Pradesh chief minister Kamal Nath wrote to the Centre asking why the schedule to fill the dam was violated.

Nath claimed that by 12 pm on September 4, the reservoir had been filled up to 135.47 metres. 'It is clear from this that the schedule provided by the Narmada Control Authority has been violated, which was issued by the authority on May 10, 2019,' the letter said.

Nath said the Gujarat government should be directed to follow the prescribed schedule as relief and rehabilitation work was under way on a massive scale in some of the already flooded areas of Madhya Pradesh.

'The Madhya Pradesh government had initially claimed that there would be flooding in only one district, but we (the Narmada Bachao Andolan) have seen flooding in four districts. Around 178 villages in these districts are affected,' Rohit Singh, a member of the Andolan, said. 'Our estimates suggest more than 30,000 families will be affected by the flooding,' he said.

In Maharashtra 33 villages and in Gujarat 19 villages are affected. 'In the two states, almost all the families have been moved out to resettlement sites,' Singh said. 'As the water level increased, the government there used police to move out people. We want the dam gates to be opened and the water level to be decreased to 122m (from 138.68m today) until the work at the resettlement sites is completed in Madhya Pradesh,' Singh added.

The flooding, however, was not severe enough to dampen the spirits of many Modi fans.

On the eve of the Prime Minister's birthday, BJP workers in Delhi prepared a 69-kg laddoo as a tribute. The laddoo had 370 and 35A written on it, to remind all of the abrogation of special status of Jammu and Kashmir. The laddoo was taken to India Gate at night by hundreds of Modi fans. Delhi BJP chief Manoj Tiwari also sang a film song. “It’s a matter of great delight to us that on this very day a child, who went on to awaken the pride of Mother India, was born in a poor family of Gujarat at Damodar Das’s house. We are celebrating this day with a sense of service,” Tiwari told the crowd at India Gate.

A Madhya Pradesh-based Hindu outfit made a 69-foot cake, which was cut by Bhopal mayor Alok Sharma, among others. But in Assam, another cake put BJP minister Himanta Biswa Sarma in a spot.

He was told to cut a cake to mark Modi's birthday. But the cake had the Prime Minister's picture on it. How could Sarma cut such a cake?

He refused, and sent for another cake.

.“We thought of cutting a cake on the occasion of Narendra Modi's birthday. There is a cake in front of us and those who made this cake put an image of Modi on it out of love. If we cut this cake, we will also have to cut the photo of Narendra Modi. Therefore, we will not cut this cake and arrange for another cake,” Sarma was quoted as saying by a Northeast-based website, Eastmojo.

The wife of Maharashtra chief minister Devendra Fadnavis, Amruta, called Modi the 'father of the country' in a tweet.

“Wishing the Father of our Country Narendra Modiji a very Happy Birthday - who inspires us to work relentlessly towards the betterment of the society!” she wrote.

Reached Kevadia a short while ago.

Have a look at the majestic ‘Statue of Unity’, India’s tribute to the great Sardar Patel. pic.twitter.com/B8ciNFr4p7

Did the country suddenly get a new Father? Saw Amruta Fadnavis tweeting

On his 69th birthday, Narendra Modi visited his mother and was bestowed the moniker 'father of the country'. A 69-kg laddoo was rolled in one state, and a 69-foot cake cut in another by his fans. But the Gujarat government pulled off an unthinkable feat to make the day memorable.

Modi arrived at Kevadiya in Gujarat this morning for the Namami Narmada festival, being celebrated by the state government to mark the filling up of the Sardar Sarovar Dam to its maximum level of 138.68 metres, almost a month before schedule. As the water level rose, it caused heavy flooding in 178 villages in neighbouring Madhya Pradesh, where 30,000 families were displaced in four districts, according to the Narmada Bachao Andolan. The dam was filled to its 'full level nearly a month ahead of schedule so that the Prime Minister could celebrate his birthday at the site,” Madhya Pradesh home minister Bala Bacchan told reporters today.