Advertisement
Home / India / Modi hails cows, scoffs at those who take it as 'sin'

Modi hails cows, scoffs at those who take it as 'sin' 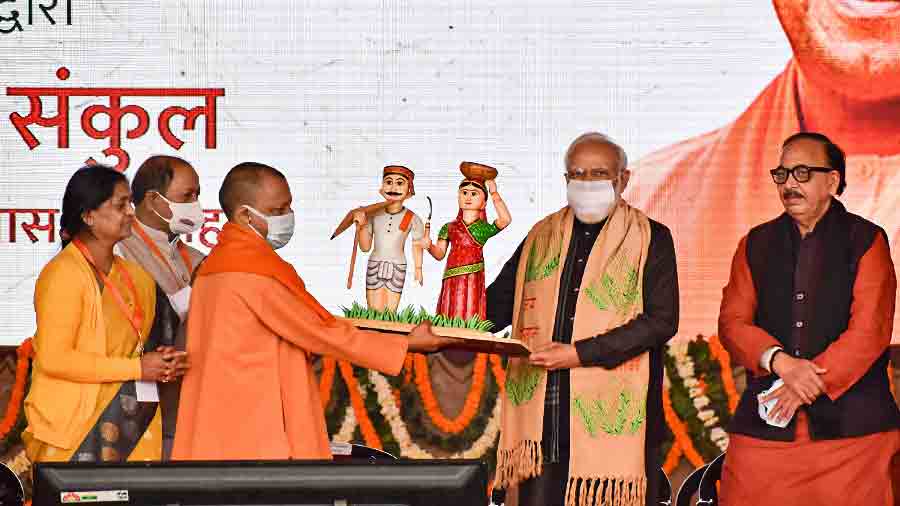 Taking a swipe at Opposition parties, Prime Minister Narendra Modi on Thursday said talking about cow has been made a matter of "sin" by some people but "it is mother and sacred for us".

The PM was addressing a rally here after inaugurating and laying foundation stones of 27 projects, including a dairy project, just months ahead of the Assembly elections in Uttar Pradesh.

He said those making jokes on cows and buffaloes forget that the livelihood of eight crore families depends on "pashudhan" (livestock).

"Talking about cow, talking about 'gobardhan' (cow dung) has been made a matter of 'gunah' (sin) by some people. Cow can be a sin for some people, for us it is mother, sacred (gaaye kuch logo ke liye gunah ho sakti hai, hamare liye gaaye, mata hai, poojniye hai)," Modi said.

In an apparent attack on the Samajwadi Party, Modi said their dictionary contains "mafiavad" and "parivarvad".

"For us, the priority is 'sabka saath, sabka vikas," the PM said.

"It gives pain to some when I talk of double engine, double power and double development as they, who see politics from the spectacle of caste, sect and religion, never wanted the development of UP," the PM alleged.

Modi also alleged that those thinking of "selfish gains" are not liking the development of the state.

Those who pushed UP backward, their anger will further increase as people from all over the state are standing with the double engine government and giving their blessings, Modi claimed.

Referring to the importance of livestock, Modi said there was a time when cattle were considered as a hallmark of prosperity.

"This sector has always been a medium of employment in a big way but for a long time, it did not get the support it needed," Modi said, adding that India's milk production increased by about 45 per cent in the past six years.

Today, India produces about 22 per cent of the world's milk, he said.

This is more than the cost of wheat and rice produced in the country, so strengthening the dairy sector is one of the top priorities of our government, he said.

The PM said Uttar Pradesh is largest milk producing state today and significantly ahead in the expansion of the dairy sector.

The PM also stressed on natural farming, saying it is the need of the hour.

"There was a time when natural farming was done in India, but with time, the scope of natural farming reduced and chemical farming overtook it. For the rejuvenation of Mother Earth, to protect our soil and to secure the future of the coming generations, we have to turn to natural farming once again," he said.

"This is the need of the hour and the government is promoting natural farming and a huge campaign is also being run to create awareness about it," the PM said as he urged farmers to adopt it.

This was Modi's second visit to his parliamentary constituency in the past 10 days. On December 13, he had inaugurated the Kashi Vishwanath Corridor.

After arriving here in the morning, inaugurated and laid foundation stones for projects worth Rs 2,095 crore.

Spread across 30 acres, the dairy will be built at a cost of about Rs 475 crore and process about 5 lakh litres of milk per day, according to officials.

The prime minister digitally transferred a bonus of about Rs 35 crore to the bank accounts of more than 1.7 lakh milk producers.

He also laid foundation stones for a biogas-based electricity generation plant and a homeopathic medical college.

Modi inaugurated the Union Education Ministry's Inter University Centre for Teachers Education, built at a cost of around Rs 107 crore.