Narendra Modi hits out at Lohia-follower parties allying with Congress 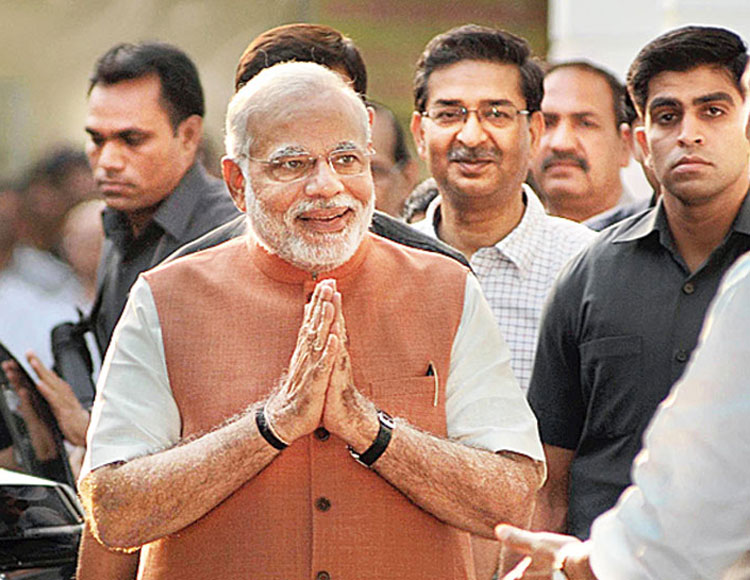 Prime Minister Narendra Modi on Saturday dubbed as 'reprehensible' efforts of regional parties to form a grand alliance with the Congress, saying socialist ideologue Ram Manohar Lohia would be 'horrified' as most of these parties claim to be his followers.

In a blog to mark the 109th birth anniversary of Lohia, Modi alleged: 'Today those parties that falsely claim to be Dr. Lohia's followers are desperate to form an opportunistic 'maha-milawat' or adulteration alliances with the same Congress (which Lohia opposed). It is both ironical and reprehensible.'

The Samajwadi Party, Janata Dal-Secular, Rashtriya Janata Dal and Sharad Yadav's Loktantrik Janata Dal were some of the parties formed on socialist ideology.

On the other hand, Modi said Lohia would be 'proud' of the NDA government led by the BJP for following his ideas.

'Dr Lohia's thoughts inspire us. He wrote about modernising agriculture and empowering farmers, which the NDA government is effectively doing through efforts such as PM Kisan Samman Nidhi, Krishi Sinchai Yojana, e-Nam, Soil Health Cards and more,' he said in the blog shared on Twitter.

Referring to gender inequality, Modi said nothing pained Lohia more than the caste hierarchy and inequality between women and men.

'But neck deep in vote bank politics, it was parties that dishonestly claim to be Dr Lohia's followers that opposed the NDA government's move to abolish the inhuman practice of triple talaq,' he alleged.

Hitting out at the Congress, Modi said whenever Lohia spoke, the Congress 'trembled with fear'.

He said Lohia had once claimed that during the Congress regime, neither agriculture and industry nor the army improved. 'These words can accurately describe even subsequent Congress regimes, where farmers were harassed, industry was discouraged (except if they belonged to friends and relatives of Congress leaders) and national security was ignored,' he wrote.

Noting that anti-Congressism was Lohia's 'heart and soul', Modi said, 'Those parties that claim inspiration from Lohia have completely abandoned his principles. They are leaving no opportunity to insult him.... Lohia always believed that dynastic politics was inimical to democracy. He would have been flabbergasted to see his 'followers' think about their own families first instead of the nation.'

Modi alleged that these parties are 'experts at grabbing power, looting as much as possible and exploiting others. Poor people, tribals, Dalits, OBCs and women are not safe in their rule because these parties give a free run to criminals and anti-social elements.'

He said: 'Today they are betraying the principles of Dr Lohia, tomorrow they will also betray the people of India.'