Two party meetings, not a word on polls 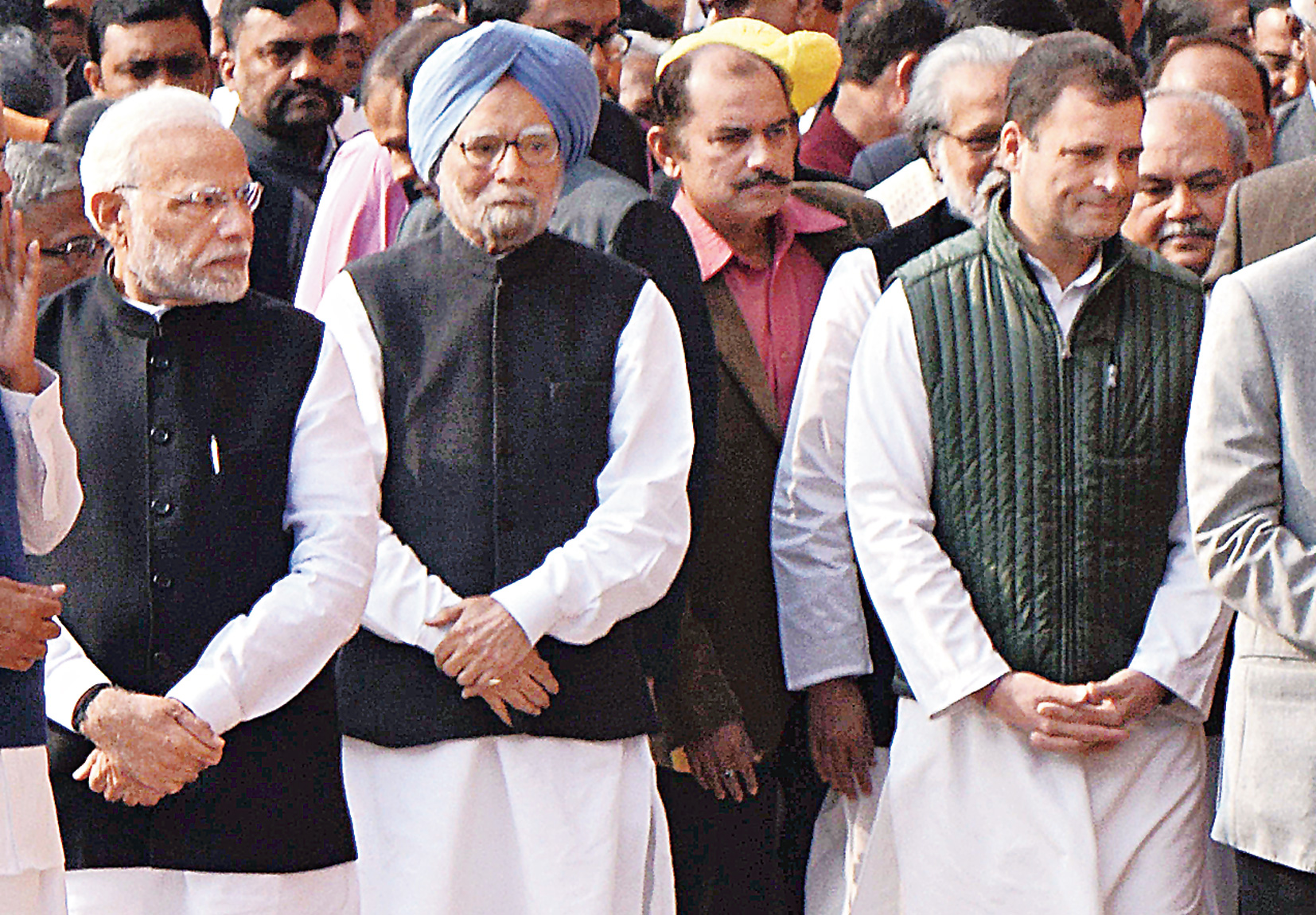 (From left) Prime Minister Narendra Modi, his predecessor Manmohan Singh and Congress president Rahul Gandhi at an event to pay tribute to the martyrs of the 2001 Parliament attack in New Delhi on Thursday.
Picture by Prem Singh
J.P. Yadav   |   New Delhi   |   Published 13.12.18, 10:24 PM

Prime Minister Narendra Modi and BJP chief Amit Shah presided over two separate meetings of the BJP on Thursday and both skipped any reference to the party’s election defeat in three heartland states, leaving leaders dismayed.

Modi addressed a meeting of BJP MPs in Parliament House in the morning, where he focused on paying homage to Atal Bihari Vajpayee and did not utter a word on the losses in Rajasthan, Madhya Pradesh and Chhattisgarh.

In the afternoon, Shah presided over a meeting of national office-bearers at the party headquarters. Like Modi, he too was silent on the defeats to the Congress in a round of Assembly elections that had been billed the semi-final ahead of the 2019 battle.

“Modi ji said this was the first Parliament session after the passing away of Atalji and asked MPs to dedicate their lives to the service of the people, like Vajpayee. There was no mention of the poll results,” a party MP who attended the closed-door meet said.

“Every MP was prepared that Modiji would talk about the party’s defeat and ask us to work harder for the 2019 general election,” he added.

If the MPs were left surprised, BJP leaders who participated in a marathon meeting at the party headquarters later in the day were just as baffled.

“This meeting on organisational issues relating to preparations for the 2019 Lok Sabha polls was pre-scheduled. Nothing outside the agenda was discussed,” BJP general secretary Bhupendra Yadav said, asked whether the party’s election defeats had figured in the meeting.

While Modi had in tweets on the evening of Tuesday — counting day — accepted the people’s mandate with “humility” and even congratulated the Congress, Shah has yet to comment in public on the electoral reverses. In the past, he has claimed the BJP will rule the country for the next 50 years.

Party MPs and leaders said that just as Modi and Shah have taken credit for all the BJP’s victories in state elections since 2014, they should now take responsibility for the defeats and introspect at party meetings.

The BJP has won many state elections since 2014, when Modi came to power at the Centre, and each time the two have claimed the victories to be the result of “Modi’s popularity” and “Shah’s election strategies”. After each state win, Modi would be showered with rose petals on arrival at the BJP headquarters and then he and Shah would address the workers, party leaders recall. Modi would credit Shah for the victory and Shah would credit Modi, while everyone else looked on as spectators.

“I had expected Modi ji to own up the defeat in the three states and tell us that we will fight back and reclaim the people’s faith. I had also expected that Modiji would slam us (MPs) for failures in convincing the voters,” another party MP present at the morning meeting said.

“He, however, acted as if the elections and the defeats had not happened,” the MP added.

While the top two leaders refused to take note of the election setbacks, a chief minister and a Union minister put up a brave front.

“There is no alternative to Modi in 2019,” Maharashtra chief minister Devendra Fadnavis said, responding to questions at an event organised by the Lokmat media group.

Fadnavis said it would be a “mistake” to call the recent state election results a “defeat for the BJP”. “We lost only in Chhattisgarh. In Madhya Pradesh and Rajasthan, our vote share was equal to the Congress,” he added.

Union human resource development minister Prakash Javadekar, also present at the event, was dismissive when asked about anger among farmers and youths.

“There is no anger…. Farmers’ question is eternal. It was there 10 years ago and will remain 10 years hence,” Javadekar replied.

The minister claimed plenty of job opportunities had been created through largescale infrastructure development and Mudra loans. His punchline was: “Joblessness Congress ka jhoot hai” (Joblessness is the Congress’s lie).

“There is no challenge to Modi (in 2019),” Javdekar declared, adding that the poor have shifted allegiance from the Congress to the BJP.

A 39-year-old farmer, who was on hunger strike for crop loan, died on Thursday in Maharashtra’s Parbhani district, police said, reports PTI.

Tukaram Vaijanath Kale, resident of Mardajgaon in Pathri tehsil, had been on hunger strike in front of the State Bank of India’s Pathri branch along with some other farmers since Wednesday.

Their demand was that the bank should grant them crop loans fast, said inspector Vidyasagar Shrimanvar of Pathri police station.

Kale's condition deteriorated on Thursday afternoon and he was shifted to a government hospital where he died during treatment, the officer said.

As the news of his death came, there was a commotion at the venue of the hunger strike at Pathri, he said.

Kale's relatives took the body from the hospital and placed it at the agitation site.

A crowd gathered at the spot but the situation was under control, the inspector said.

The exact cause of Kale's death is not yet known, he said.

An accidental death report has been registered and further investigation is underway, he said.

Narrow loss for BJP? Devil does not agree