Mystery stalks death of a tigress at Palamau 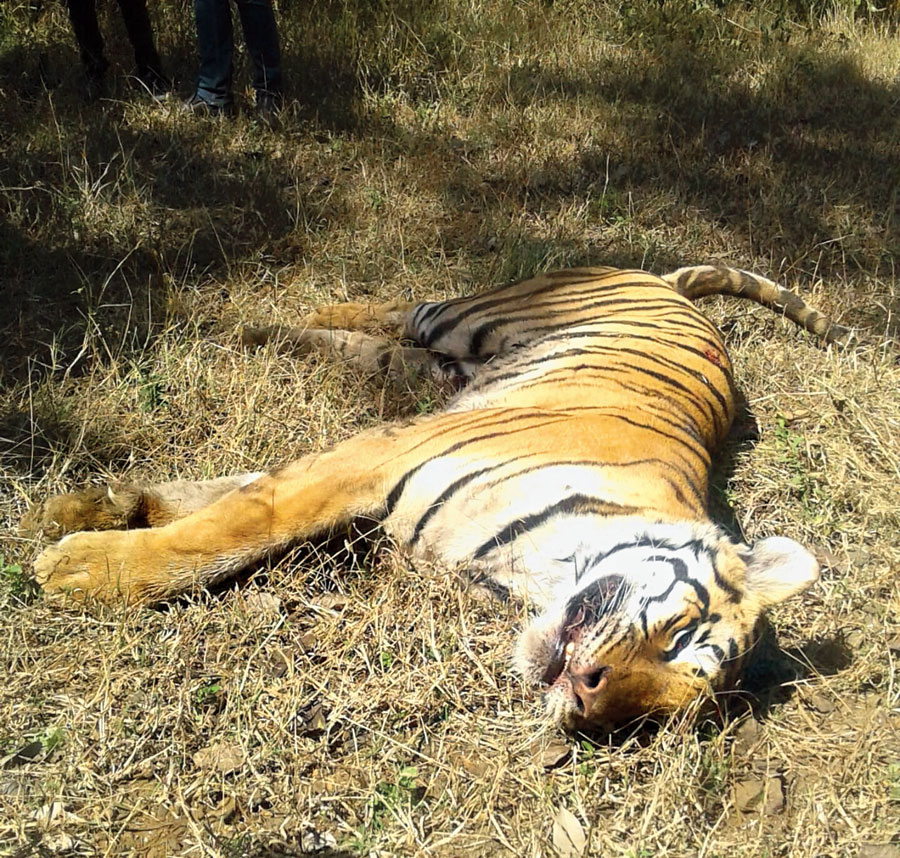 The majestic tiger has always been a source of awe and mystique in the orient. Now, the death of a tigress has thrown up a mystery that is turning curiouser and curiouser.

When the tigress was found dead at the Palamau Tiger Reserve last week, officials had said the aged big cat must have been gored to death by a bison or a herd of bison protecting its young.

The tigress was found dead on the grass near road number 2 of the Betla National Park — of which the Palamau Tiger Reserve (PTR) is a part — on the night of February 15. The carcass was cremated on February 16, after autopsy by a panel of five veterinarians.

A senior forest officer in Bengal, who came across the picture of the carcass and the official version in The Telegraph, told the newspaper that the photograph does not readily bear out the conclusions attributed to the officials.

The Bengal-based officer, who sought anonymity because he did not want to be seen as questioning fellow officers in another state, put this newspaper on to a retired forest officer in Jharkhand who raised three doubts.

The retired Jharkhand official who, too, requested anonymity said: “The nose of a tiger usually turns black by the time it turns 16 but the nostrils of the dead tigress have a pinkish tinge, a trait of younger big cats.”

When this newspaper started making enquiries in Daltonganj, the district headquarters of Palamau, the local MP said he had been told that a gunshot was heard in the area days before.

“Too many things are being said about the death — like gunshot being heard in the park, the tigress not having eaten for days, her over-ageing, no blood at the spot where she was found dead. So, I want the reserve to come clean through a thorough probe,” Chatra MP and BJP leader Sunil Kumar said. The Chatra Lok Sabha constituency includes the Betla National Park.

“The death of the tigress is a big loss. It should be thoroughly investigated. No angle should be left out in the investigation,” said the MP, who is now part of the Opposition in the state.

Although based on third-person accounts, the gunshot claim assumes significance because a forest veteran said that the area where the tigress was found was notorious for spotted deer hunting. He wondered whether poachers had opened fire on deer, missed the target and hit the tigress that was stalking prey.

Deer hunting is rampant in the region, said the veteran forester who has spent decades in jungles of Bihar and Jharkhand. Betla, the name of the national park, is an acronym for bison, elephant, tiger, leopard and Axis axis (spotted deer). Deer is often killed for its meat, besides the prized horns and skin.

Asked, Palamau Tiger Reserve field director Y.K. Das said there was no violation of any norms, and the standard operating procedure (SOP) had been adhered to. The divisional forest officer of Latehar inspected the carcass as a representative of the National Tiger Conservation Authority (NTCA), Das added. The NTCA has an SOP in place.

“The carcass was found on Saturday (February 15) night. Our men kept tight vigil through the night to ensure there was no tampering of any evidence till the doctors and officials arrived,” Das said.

Told about the gunshot claim, he said: “There should have been two holes in the body if a bullet went in and went out. Otherwise, the bullet must have been inside the body. A detailed test was carried out but the doctors neither found two bullet holes nor any trace of metal inside the body.”

A bullet should also have punctured the ribs, heart or lungs of the tigress but the organs were intact, he added. “A detailed report is being sent to the NTCA. But we did everything according to the rule book,” said Das. Others said that if a country-made gun was used, there need not always be an exit wound.

On Sunday, Das had said that a hunt for prey had proved costly for the tigress. “Basically, her claws and teeth had decayed, she was too old and frail. Basically, she had no stamina to hunt or fight for supremacy,” Das had said.

Betla ranger Prem Prasad had said a bison killed the aged tigress after a fight between the two. On Thursday, Prasad maintained that a bison had killed the tigress, and said a search was still on for any bison with injuries from a big cat. So far, the team has not been able to locate any such bison. “So, we have intensified our search,” Prasad said. “There are many bison in Betla National Park and around 30 babies. Any bison herd with young babies is very aggressive.”

Ajay Kumar, Ranchi zoo veterenarian who was part of the five-vet team that conducted the autopsy, had said the tigress was at least 16 years old, and had been hunting small prey like porcupines to live. The hungry tigress must have tried to pounce on a baby bison and a herd of bison had attacked it, he had assumed.

On Sunday evening, former state wildlife board member D.S. Srivastava, who had been to Betla to inspect the carcass, had said the tigress had a 3-inch-long and deep wound in her stomach, most possibly caused by a bison’s horn piercing it. Her claws and teeth were worn out. From her frame, it appeared that she found it hard to get prey, he had added.

On Thursday, responding to questions from this newspaper after the doubts expressed by others, Srivastava said if the tigress was gored by bison as the reserve authorities say, there should have been blood. “I did not see any blood on the grass where the tigress was lying dead,” Srivastava said, without revising any of his assessments made on Sunday.

Sunil, the MP, asked why the carcass was not preserved — in the two deep freezers the PTR has specifically for that purpose — till NTCA officials inspected it.

He wondered why the reserve officials were not monitoring the tigress closely if she had become incapable of hunting big prey. “Her tracking and monitoring seemed inadequate and inept,” the MP said.

“The tigress did one big thing,” he added. “She died only to tell the world that there lived a tigress in the Betla National Park. Her death certificate is proof of her being here.”

Congress MLA Ramchandra Singh also questioned the “hurry” with which the carcass was cremated. “By the time I reached the Betla National Park on Sunday, the tigress had already been cremated,” said MLA Ramchandra, whose constituency Manika includes a major chunk of the reserve.

Sources in the NTCA, the national conservation authority, said the field director had sent a preliminary report that was inconclusive.

In response to a question from this newspaper, Anup Nayak, additional director-general of the NTCA, said a detailed report had been sought from the director of the Palamau Tiger Reserve. “We are waiting for the report and will conduct an independent inquiry if needed,” Nayak said.