No arrest has been made so far, further investigation into the case is on 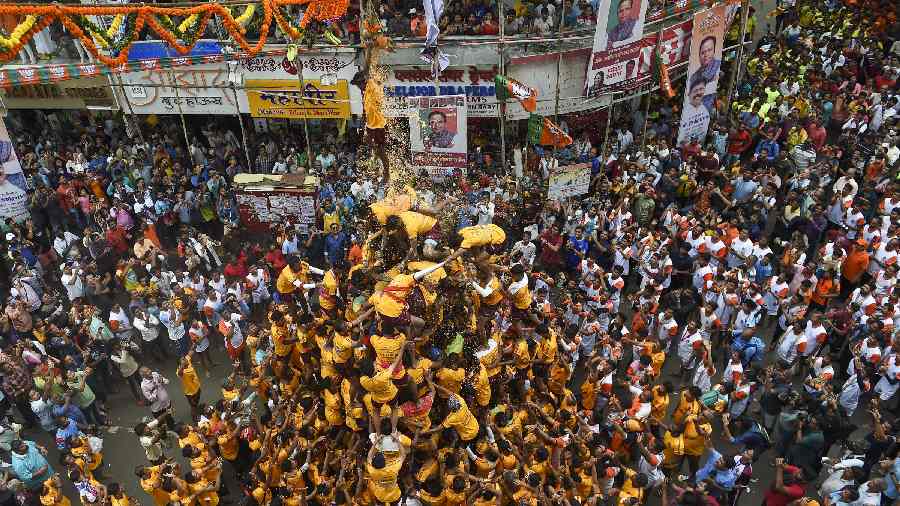 A 24-year-old 'Govinda' died after suffering injuries in the Dahi Handi festival following which police registered an FIR against the event organiser, an official said on Tuesday.

Sandesh Dalvi, a member of the Shiv Shambho Govinda Pathak group, suffered serious head injuries after he fell from a human pyramid formed by 'Govindas' (Dahi Handi participants) during the Krishna Janmashtami celebration at Bamanwadi in Vile Parle area on Friday.

He died at the Nanavati Hospital on Monday night, the official from Vile Parle police station said.

After Dalvi was injured, police had registered an offence against the event organiser. Following his death, the police have added Indian Penal Code sections 304-A (causing death by negligence) and 338 (causing grievous hurt by act endangering life) to the FIR, the official said.

No arrest has been made so far, he said, adding that further investigation into the case is on.

As many as 222 Dahi Handi participants were injured while forming human pyramids during Janmashtami celebrations in Mumbai and 64 in Thane city on August 20.

Of the 222 injured participants, the highest 58 Govindas were treated at the civic-run KEM Hospital, followed by 20 each at Rajawadi Hospital and Trauma Care Hospital, 19 at Sion Hospital and 17 at Cooper Hospital.

Officials said that most of the Govindas suffered injuries to their hands and legs following a fall while forming human pyramids.

Several Govindas were also treated at private hospitals like Bombay Hospital, Hinduja Hospital and Nanavati Hospital, among others, for their injuries.

Thane Municipal Corporation's Regional Disaster Management Cell (RDMC) chief Avinash Sawant said, "A total of 64 participants suffered injuries while forming human pyramids as part of Dahi Handi celebrations on Friday. Most of the injured were provided treatment by the medical teams present on the spot."

"All of them are out of danger and recovering," Sawant said.

On Thursday, CM Shinde told the Legislative Assembly that the government had decided to accord adventure sport status to Dahi Handi. The adventure sport tag will allow young participants at these events to apply for government jobs under the sports quota.

Participants or their families will also be provided compensation if the participants suffer injuries while forming human pyramids, the chief minister said.