Advertisement
Home / India / Mr Permit Shah, this is not your job

Mr Permit Shah, this is not your job 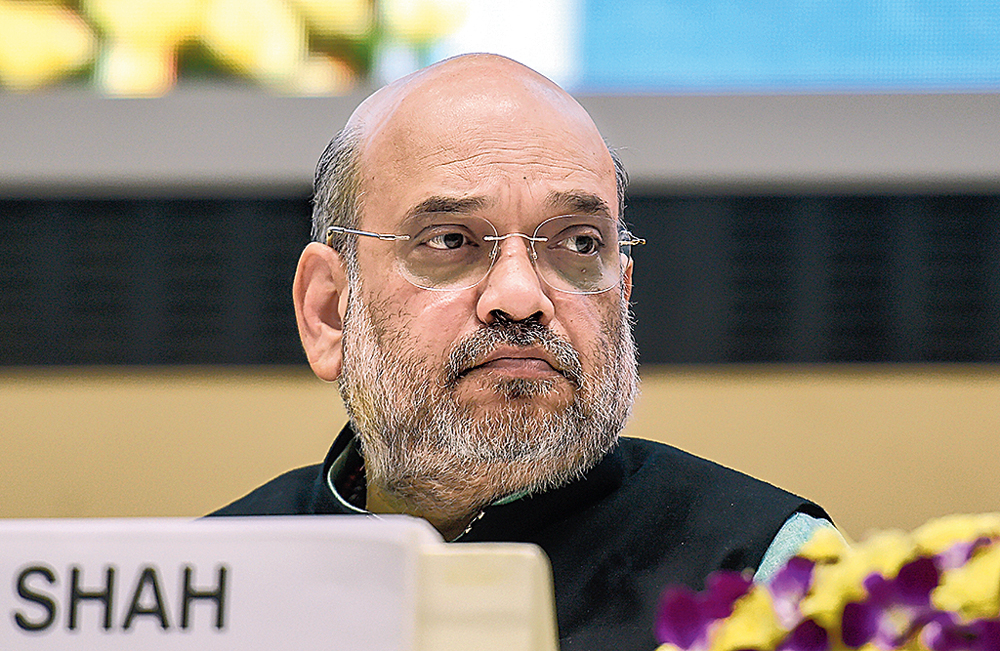 Union home minister Amit Shah’s offer to grant permission to politicians to visit Jammu and Kashmir has opened him to Opposition ridicule and charges of misrepresentation.

The fresh glare coincided with a move by US Senators to seek information on the Kashmir clampdown, which has surprised analysts because it came too close to President Donald Trump’s visit to India later this month.

The European Union, while acknowledging positive steps to restore normality in Kashmir, on Friday called for the swift lifting of the remaining restrictions in the new Union Territory.

The Opposition deployed sarcasm and cited specific instances to challenge Shah after he said at the Times Now conclave on Thursday that “they (Rahul Gandhi and Sitaram Yechury) never went to Kashmir after they were stopped once. They can go now. Anyone can go there now, we will give permission to everyone.”

CPM general secretary Yechury, who was detained twice at Srinagar airport before he approached the Supreme Court for permission to visit, was quick to respond: “Since when do Indians need permission to travel to any other part of India from Amit Shah?”

Yechury called out the inaccuracies in Shah’s statement.

“I went again to Kashmir, Mr Shah, without your condescending permission, but after filing a case in the Supreme Court. You not only run a brutal and insensitive government but also an incompetent one, if your agencies didn’t tell you that I went to Kashmir thrice,” Yechury tweeted.

The CPI’s D. Raja, who had gone along with Yechury on the first two attempts to visit Srinagar, had the same question for Shah.

“Who is he to give us permission to visit a part of this country? On the one hand, the government claims that normalcy has returned, and then he says permission is needed. What kind of normalcy is this?’’

Raja and Yechury were the first politicians to try to visit Srinagar soon after the constitutional contours of the erstwhile state were changed in early August. The two leaders were turned away from the airport itself, not allowed to exit it or even engage with other passengers inside.

Subsequently, both Left leaders went with other Opposition party members, including Congress MP Rahul, only to be turned away again from the airport.

On Friday, the RJD’s Manoj Jha used sarcasm in his response: “Thank you @AmitShah ji for this ‘great favour’ in a democratic country. But before we decide to visit as you have now very kindly ‘allowed’ us... would we be able to meet your/our colleagues like @F_Abdullah01 @OmarAbdullah @MehboobaMufti…? Waiting!”

Further, Jha told reporters: “I am grateful to the honourable home minister for giving us permission to go somewhere. This is the current status of our democracy where the home minister will decide who can go where. Anyway, now that you have given us permission to go after organising a couple of conducted tours for legislators from abroad and diplomats, we are ready to go.

“But will we go and ask the Chinar tree how do you like the normalcy? Please give us permission also to meet the detained leaders. And, after we return, we shall publicly express our gratitude to the home minister for allowing us to travel in our own country.”

The Opposition has been upset over the government facilitating visits for foreign legislators and diplomats while preventing India’s own politicians from visiting Jammu and Kashmir and meet their colleagues and interact freely with the people.

In October, the government had facilitated a private visit of members of the European Parliament — mostly from far-Right parties — and in January and again this week, diplomats based in Delhi were taken to the new Union Territory on a conducted visit.

Asked about their head of mission’s assessment of the visit, Virginie Battu-Henriksson, the EU spokesperson for foreign affairs and security policy, said: “The visit confirmed that the government of India has taken positive steps to restore normalcy. Some restrictions remain, notably on Internet access and mobile services, and some political leaders are still in detention. While we recognise the serious security concerns, it is important that the remaining restrictions be lifted swiftly.”

The two-day visit to Srinagar and Jammu ended on Thursday and was followed up on Friday with a briefing by national security adviser Ajit Doval.

Four members of the US Senate have written to secretary of state Mike Pompeo seeking details on detentions and the clampdown in Jammu and Kashmir, besides the number of individuals at risk of statelessness in case the NRC is implemented.

They also sought information on excessive use of force against those protesting the Citizenship (Amendment) Act. Pompeo has been given 30 days to respond.

The letter — signed by two senators each from the Republicans and the Democrats — reminds the US government of the inclusion of Kashmir-related restrictions in the Foreign Operations and Related Programs Appropriations Report, describing the Modi government’s actions as “troubling”.

The letter of the senators has surprised Capitol Hill watchers, coming as it does less than a fortnight before President Trump embarks on his India visit, more so because one of the signatories is Lindsey Graham, known to be close to Trump.

South Asia senior associate at the Washington-based Wilson Centre, Michael Kugelman, tweeted: “I’m not one to overstate the impact of Congress’s criticism of India, but this is big — a strongly worded letter from a bipartisan group of senators, including Lindsey Graham who has Trump’s ear on foreign policy issues. This isn’t liberal bias. It’s a tough bipartisan message.”