MPs do not enjoy immunity from arrest in criminal cases during Parliament session: Naidu

Leader of Opposition in Rajya Sabha, Mallikarjun Kharge, has been insulted as he was summoned by Enforcement Directorate, says Congress 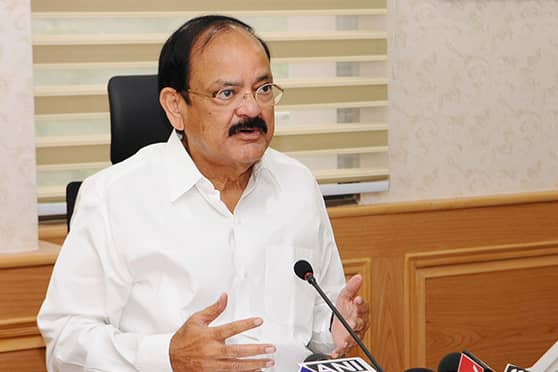 Rajya Sabha Chairman M Venkaiah Naidu on Friday clarified that members of Parliament do not enjoy any immunity from arrest in criminal cases when the House is in session and they cannot avoid summons issued by law enforcement agencies.

Rajya Sabha proceedings were adjourned for almost half an hour till 11.30 am on Friday as Congress members created an uproar alleging misuse of probe agencies by the government.

When the Upper House assembled for the morning session, Chairman M Venkaiah Naidu proceeded with the scheduled business of laying of the listed papers on the table, but had to adjourn the House within a few minutes.

More than 10 Congress members trooped into the Well of the House, protesting against the alleged misuse of central probe agencies. The Congress members said the Leader of Opposition in the Rajya Sabha, Mallikarjun Kharge, has been "insulted" as he was summoned by the Enforcement Directorate on Thursday during the working hours of Parliament.

When the Upper House reassembled after the adjournment at 11:30, Naidu said there is a wrong notion among the members that they have a privilege from action by agencies while Parliament is in session.

He said that under Article 105 of the Constitution members of Parliament enjoy certain privileges so they can perform their duties without any hindrances.

One of the privileges is that a member of Parliament cannot be arrested in a civil case 40 days before the commencement of the session or committee meeting and 40 days thereafter, Naidu said, adding that this privilege is already incorporated under Section 135A of the Civil Procedure Court.

He cited his past observations in this regard and Supreme Court rulings.

Naidu reiterated that no member of the House should avoid appearing before any investigating agency is he is called upon to do so, by citing reasons of the House duty.

"It applies to all...because you can only perform when the House is in session seeking further date but you cannot avoid the enforcement agencies or the law enforcement agencies' summons or notices. This has to be taken note of by one and all," the Rajya Sabha Chairman said.