In the nagar palika polls, where the winning ratio was in the 55-45 per cent range in the past, this time, out of 36 of the first phase, the BJP has won 27, Congress four and Independents five 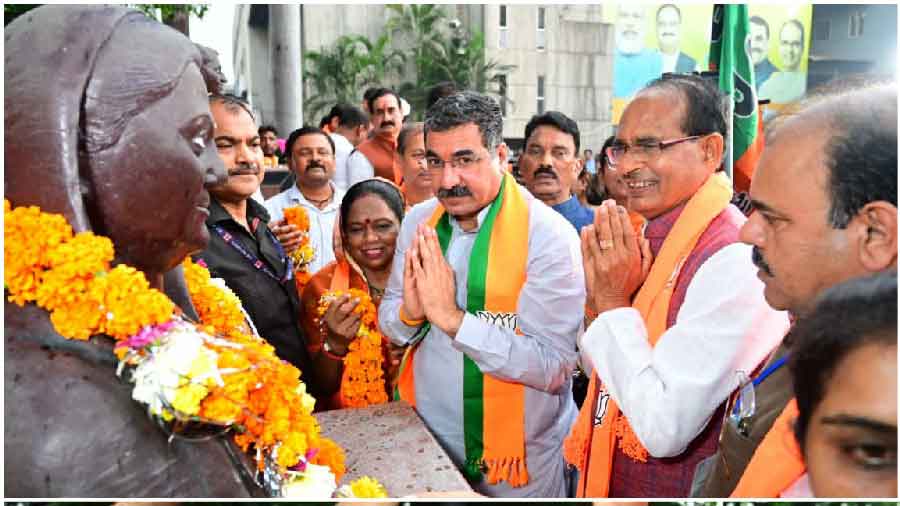 Madhya Pradesh Chief Minister Shivraj Singh Chouhan on Sunday termed the Bharatiya Janata Party's (BJP) performance in the local body polls in the state as "historic", saying that people from urban and rural areas voted in favour of the ruling party.

He said the party has won over 80 per cent seats in the nagar panchayat and nagar parishad polls and also performed very well in the 11 municipal corporations as well.

Madhya Pradesh Congress chief Kamal Nath said he was encouraged with his party's performance in the civic polls.

Local bodies elections in the state for 413 municipalities, including 16 Nagar Palika Nigam, 99 Nagar Palika Parishad and 298 Nagar Parishad were held in two phases earlier this month - on July 6 and 13. Under the first phase, polling was held in 11 municipal corporations, 36 nagar palikas and 86 nagar parishads. The counting of votes for these elections began at 9 am on Sunday.

In the first phase, elections for the post of mayor were held in Burhanpur, Satna, Khandwa, Sagar, Singrauli, Jabalpur, Gwalior, Chhindwara, Indore and Bhopal

"The BJP has won over 80 per cent seats in nagar panchayat and nagar parishad polls. In the elections for the polls in 11 municipal corporations, the party's mayoral candidates are winning seven, while the Congress have three and Aam Aadmi Party (AAP) one," chief minister Chouhan told workers at the BJP's state office.

"In these three (municipal corporations) too, the Congress has not won completely as BJP has got more corporator seats, In Gwalior, out of 66 seats, BJP has won 36 and the Congress 29. In Jabalpur, out of 79 seats, 39 were won by the BJP and 30 by the Congress," he added.

As per the results announced so far by the election officials, the BJP has won the post of mayor in five municipal corporations - Burhanpur, Satna, Khandwa, Sagar and Ujjain, while the Congress has won in Chhindwara and the AAP in Singrauli. The BJP and Congress have taken decisive leads in two civic bodies each, they have said.

In the nagar palika polls, where the winning ratio was in the 55-45 per cent range in the past, this time, out of 36 of the first phase, the BJP has won 27, Congress four and Independents five, Chouhan said.

"Likewise, in Singrauli too, out of 45 seats, 23 are with the BJP and 13 with the Congress. This means people have voted for the lotus (BJP symbol) in a large number of wards, though they may have given support to mayoral candidates from other parties," the chief minister claimed.

In the nagar palikas, where five Independents won, the BJP will come to power as it will support these five, Chouhan said.

As per the election officials, final results for mayoral posts have been announced only in seven of the 11 municipal corporations that went to polls.

While the BJP has won Sagar, Satna, Khandwa, Burhanpur and Ujjain, it is confident of winning Bhopal and Indore where counting is still in progress.

The Congress has won Chhindwara and was leading in Gwalior and Jabalpur, they said.

The Congress, in a statement, said it has "won" the post of Gwalior mayor after 57 years, Jabalpur after 23 years and Chhindwara, a bastion of the party's state unit chief Kamal Nath, for the first time.

Talking to reporters here, Kamal Nath said, "The result is encouraging for the Congress. We have won three mayoral elections - in Chhindwara, Jabalpur and Gwalior. A large number of our corporators have won the civic body elections too. We won the top post of Gwalior city after 50 years."

The former chief minister accused the BJP of winning the elections with the help of police and administration.

"We are going to review the results of Bhopal and Indore (where the BJP has established a decisive lead in mayoral elections)," he added.

On the Congress's loss of Burhanpur mayoral election, he said that the BJP's "B team" - the Asaduddin Owaisi-led All India Majlis-e-Ittehadul Muslimeens (AIMIM) made the difference.

In Burhanpur, where the BJP won, Owaisi-led party's candidate Shahista Suhail garnered 10,274 votes. Besides, 677 voted for the None of the Above (NOTA) ballot option, officials said.