Incriminating materials, arms and ammunition, including an AK rifle and three magazines, seized 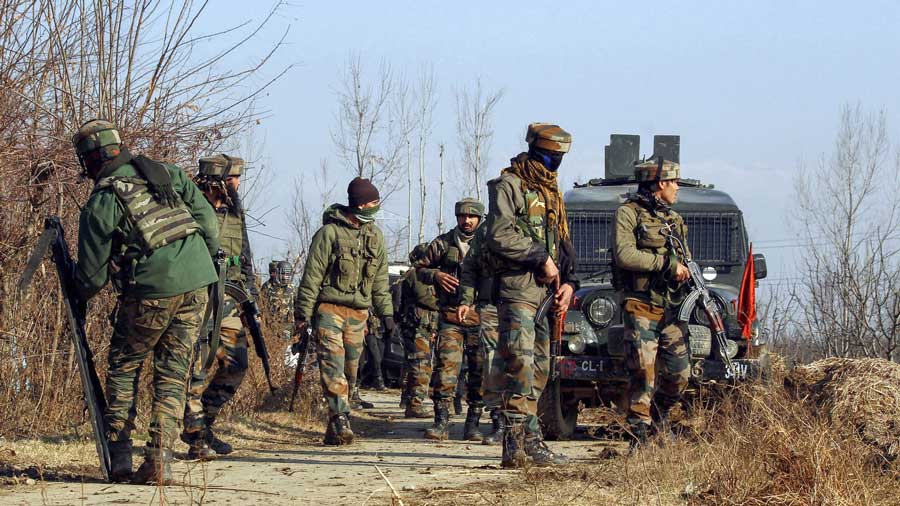 Security forces shot dead a most wanted Hizbul Mujahideen terrorist in an encounter in Jammu and Kashmir's Pulwama on Wednesday.

"Police and security forces neutralised an 'A+' categorised terrorist of proscribed terror outfit HM," a spokesperson of the Jammu and Kashmir police said, adding that the slain terrorist was involved in several terror crimes, including an attack in Shopian's Zainapora in 2018, in which four police personnel were killed.

He said acting on a specific input regarding the presence of a terrorist in Pulwama's Uzrampathri village, the security forces launched a cordon-and search operation in the area in the intervening night of December 14 and December 15.

"During the search operation, as the presence of the terrorist got ascertained, he was given repeated opportunities to surrender. However, he fired indiscriminately upon the joint search party, which was retaliated, leading to an encounter," the police spokesperson said in a statement.

In the encounter, a member of proscribed terror outfit Hizbul Mujahideen, identified as Feroz Ahmad Dar, a resident of Heff-Shrimal in Shopian, was killed.

"As per police records, the killed terrorist was 'A+' categorised and was part of groups involved in several terror crime cases, including attacks on security forces and civilian atrocities," the statement said.

The slain terrorist was also involved in the killing of a girl, Ishrat Muneer, in February 2019.

"Dar was involved in killing of a non-local labour, Charanjeet, a resident of Fazila, Punjab, and injuring others in October 2019, when they were loading apple boxes in a vehicle in the Zainapora area of Shopian. Besides, he was also instrumental in luring the gullible youth to join terrorist ranks," the police spokesperson said.

Incriminating materials, arms and ammunition, including an AK rifle and three magazines, were seized from the possession of the slain terrorist, he added.