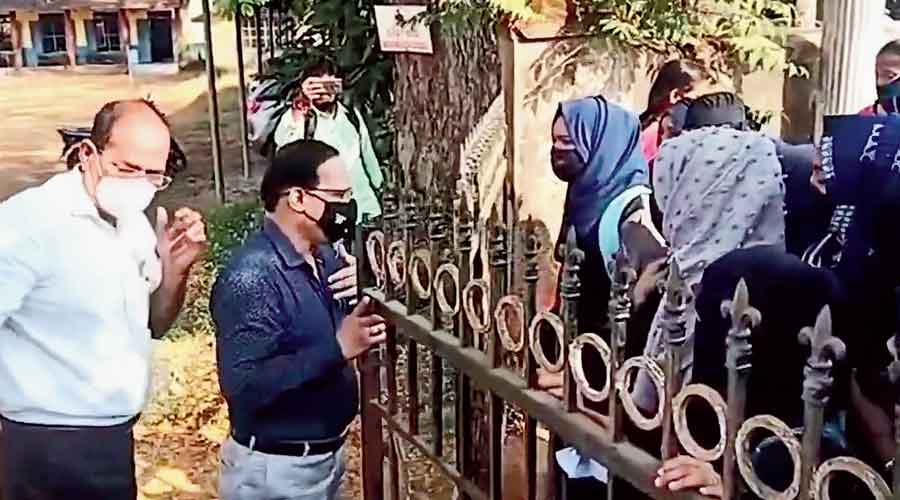 Principal BG Ramakrishna shutting the gates of the Government Pre-University College in Kundapura, Udupi, on the Muslim girls who refused to remove their hijab.
The Telegraph
K.M. Rakesh   |   Bangalore   |   Published 05.02.22, 01:45 AM

More colleges in Karnataka have begun stopping girls wearing hijab from entering, triggering protests after tearful pleas fell on deaf ears and spawning a communal counter from a section of male students turning up in saffron scarves and chanting “Jai Shri Ram” when stopped from setting foot on campus.

What had started at the Government Pre-University College in Udupi town, where six Muslim students have been forced to stay out of their classes for weeks for wearing the hijab, has now spread to at least two more educational institutions.

Twenty-three Muslim girls were denied entry to the Government Pre-University College at Kundapura taluk in Udupi district on Thursday, prompting them to begin a sit-in outside the campus that continued on Friday.

A private college a short distance away in Kundapura followed suit on Friday by turning away more than 20 students who had come wearing the hijab. The action was taken despite the calendar for Bhandarkar’s Arts and Science College’s current academic year clearly mentioning that girls are allowed to wear “scarf”.

The students who were denied entry chanted “we want justice” outside the locked gates as police kept a close watch.

Hijab-wearing girls plead with principal Ramakrishna after they were barred from entering the college.
The Telegraph

The protesting students at the government college in Kundapura were in tears while pleading to the policemen and teachers to let them in and allow them to complete their academic year since public exams are just two months away.

In a counter-protest, male students turned up in large numbers wearing saffron scarves at two government pre-university colleges — one at Byndoor, some 30km from Kundapura, and the other at Ramadurga in Belgaum located about 360km up north.

Karnataka High Court is set to hear a case filed by a student of the Government Pre-University College in Udupi town that was the first to shut doors to hijab-wearing students in late December.

The boys demanding entry to colleges in saffron scarves and creating a ruckus when stopped appear to have been instigated by certain Sangh parivar outfits out to fish in muddy waters before next year’s Assembly elections in BJP-ruled Karnataka, many suspect.

The Hindu Jagarana Vedike, among the most prominent Sangh parivar organisations in Udupi and its surrounding areas, has threatened to intensify its protest if Muslims are allowed to wear the hijab in educational institutions.

“It’s not just the Muslims who know how to seek their rights. Even we, the Hindus, know how to seek our rights. We are ready to conduct various types of protests if you (Muslims) go on with Islamisation of the country in the name of seeking rights,” local Vedike leader Yakshi Matha had said on Wednesday.

Senior politicians from both the ruling and the Opposition parties have joined the debate over the right to wear the hijab in educational institutions.

The leader of the Opposition, P.C. Siddaramaiah of the Congress, slammed the government for keeping mum on the issue for over a month and backed the right of Muslim students to wear the hijab.

“How can they force the girls to remove the hijab that they have been wearing all these years? The counter-protesters who haven’t been wearing saffron scarves regularly are doing it now to create an issue,” he said.

“The BJP rakes up such issues only when elections are in sight. They never raise people’s problems,” Siddaramaiah added.

Primary and secondary education minister B.C. Nagesh blamed political leaders for the controversy. “Political leaders should have told these students not to play politics in educational institutions. They (students) should go there to gain knowledge, by following rules.”

State wakf board chairman N.K. Muhammed Shafi Saadi told reporters that he was in touch with the education minister and would talk to the minority commission chief to find a lasting solution to the hijab row.

“I feel this controversy has spoiled the good atmosphere that prevailed in our educational institutions and it should have never happened. Let us abide by the high court judgment, whatever it may be, and maintain peace and harmony,” he said.