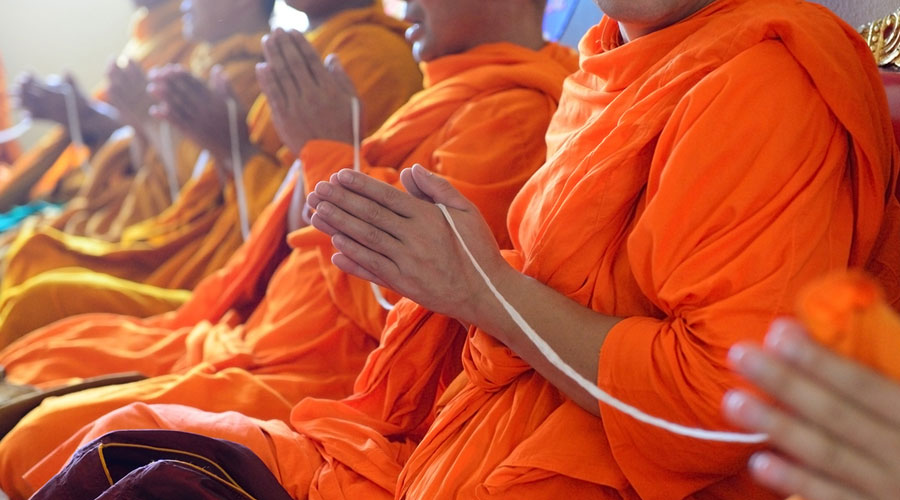 Two Buddhist monks went on a day’s hunger strike to demand recognition for Ayodhya as a Buddhist site and secure for the community a share in the land allotted for the Ram temple.

Gyan Ratna Buddha Sharan Kesariya and Sunit Ratna, who are both members of the Akhil Bharatiya Azad Bauddha Dhamma Sena based in Bihar’s East Champaran, sat on the hunger strike on Tuesday near the statue of Babasaheb Bhimrao Ambedkar on the Katchehri premises in Faizabad. They ended the fast after an assurance from the Faizabad city magistrate S.P. Singh that their memorandum would be sent to the people addressed.

They have threatened to start a movement within a month if their demands are not addressed.

The two have demanded that the symbols and figurines discovered in the last few weeks during excavations and levelling of 2.77 acres for construction of the Ram temple be made public.

“We read in newspapers and saw on television channels that some Buddhist symbols and idols of Lord Buddha were found at the site last month. This is proof that there must have been a Buddhist centre here during the ancient or medieval period. The government and the courts had not taken our claims in the past seriously. They should accept our demand now and allot us some land in the 2.77 acres to develop a Buddhist site here,” said Kesariya.

Resolving the Babri Masjid-Ram Mandir title dispute last year, the Supreme Court had ruled in favour of the Hindus and ordered the Centre to give an alternative plot to Muslims. Both communities had claimed ownership of the 2.77 acres where a mosque stood but which the Sangh parivar had claimed was the birthplace of Ram.

“There are also some historians who claim that Ayodhya is the ancient city of Saket, which was a Buddhist centre in the past. The new discoveries in the last few weeks further strengthen this view. We demand the central government invite Unesco to monitor the excavation and decide on our claim in the background of the fresh findings. The remains of Buddhism should also be preserved carefully as it is related to the very rich culture and tradition of India,” said the monk.

Sunit Ratna said: “King Prasenjit of Kosala kingdom (modern Oudh) had founded the city of Saket in the memory of Bodhisattva Rishi Lomash, who had lived here. Besides the Hindu and the Muslim sides, the Buddhists had also moved the Supreme Court for their share in the disputed land but our appeal was ignored.

“We don’t oppose Ram temple but it is the responsibility of the world to protect Buddhist sites also.”

A local government officer said on condition of anonymity: “Recently, besides some pillars, some idols of Buddha, symbols of Ashok’s Dhamma Chakra and other Buddhist figurines were discovered during levelling work. Prime Minister Narendra Modi is expected to lay the foundation stone for the Ram temple here next month.”

Buddhists have been claiming their right to the land since the beginning of the dispute. They claim there was a Buddhist monastery at the site that was demolished by Mir Baqi, a chieftain of the first Mughal emperor Babur. However, their plea was rejected by Allahabad High Court.

Vinit Maurya, a Buddhist from Ayodhya town, filed an appeal in the Supreme Court on March 6, 2018, and said: “There was a Buddhist monument at the site in Ayodhya before it was pulled down and Babri Masjid was built there. Four rounds of excavations were done here between 1993 and 2009 and Buddhist stupas, pillars and walls on which Buddhist figures were carved were found. The archaeologists had also suggested in their reports that it was a Bauddh Vihar and so a part of the land should be handed to the Buddhists.”