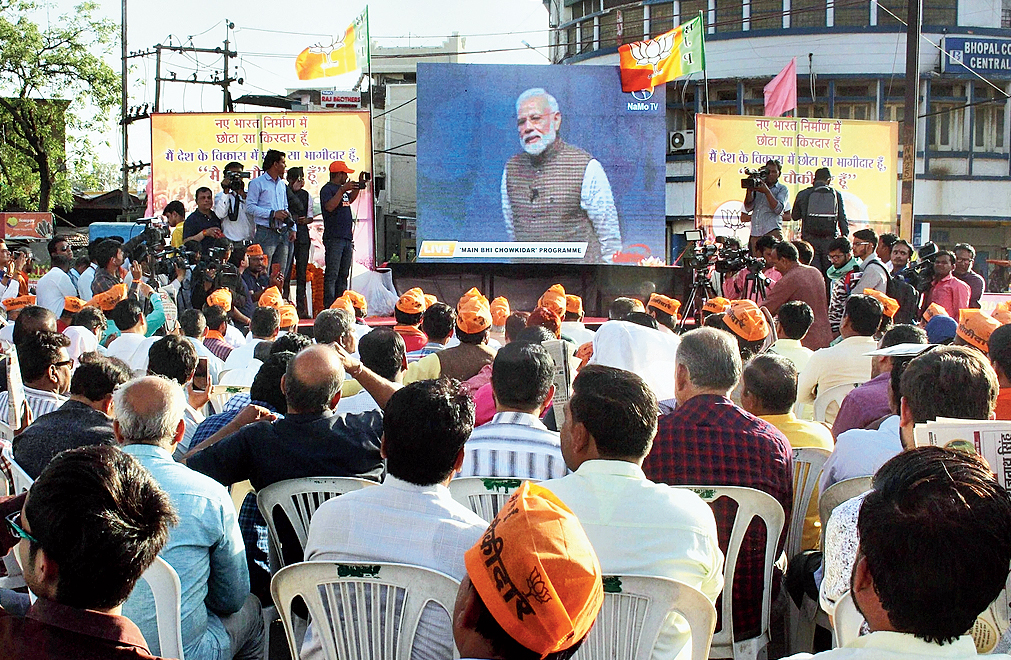 Prime Minister Narendra Modi on Sunday linked his “Main bhi chowkidar” call to Mahatma Gandhi to try and legitimise a campaign that was launched to blunt the Opposition’s “Chowkidar chor hai” slogan targeting him.

“(The) Chowkidar (campaign) is in my view a continuation of Mahatma Gandhi’s idea of trusteeship,’’ Modi said, interacting with people live through video-conferencing as part of the “Main bhi chowkidar” campaign. “It is aimed at invoking that spirit of trusteeship.”

Mocked relentlessly by the Opposition with the “chowkidar chor hai” (The watchman is a thief) slogan, which accuses the Prime Minister of corruption in the Rafale deal, Modi had called on people to proclaim themselves “chowkidar”. On Sunday, he interacted with those who had responded to the call.

“Gandhi used to say that whatever responsibility we have been given or taken upon ourselves, we should view it and use it only as a trustee. He is no longer around but his words remain an inspiration. The meaning of words may change but the spirit lives on,’’ Modi said, invoking all present in the gathering to say that “everyone is a chowkidar”.

“India needs chowkidars, not rulers,’’ he said, adding that when all are vigilant, there would be no place for thieves in the country.

Writing in Harijan in June 1939, Gandhi had elaborated on his “theory of trusteeship”, saying: “Supposing I have come by a fair amount of wealth — either by way of legacy, or by means of trade and industry — I must know that all that wealth does not belong to me; what belongs to me is the right to an honourable livelihood …. The rest of my wealth belongs to the community and must be used for the welfare of the community.’’

Apart from citing Gandhi, Modi’s interaction followed the now-familiar script of questions that allow him to dwell on subjects of his choice while keeping up the semblance of a question-and-answer session.

The subjects he spoke on included the Balakot air strike, the anti-satellite mission, the Congress “eco-system of lies’’, and his agenda for the next five years if voted back to power.

Although he has repeatedly injected Pakistan into the discourse on the campaign trail, Modi on Sunday said: “We have wasted a lot of time on India-Pakistan. Arre woh apni maut marega, usko chhod do. Hum aage nikal chalen (It will die its own death. Leave it. Let us proceed).’’