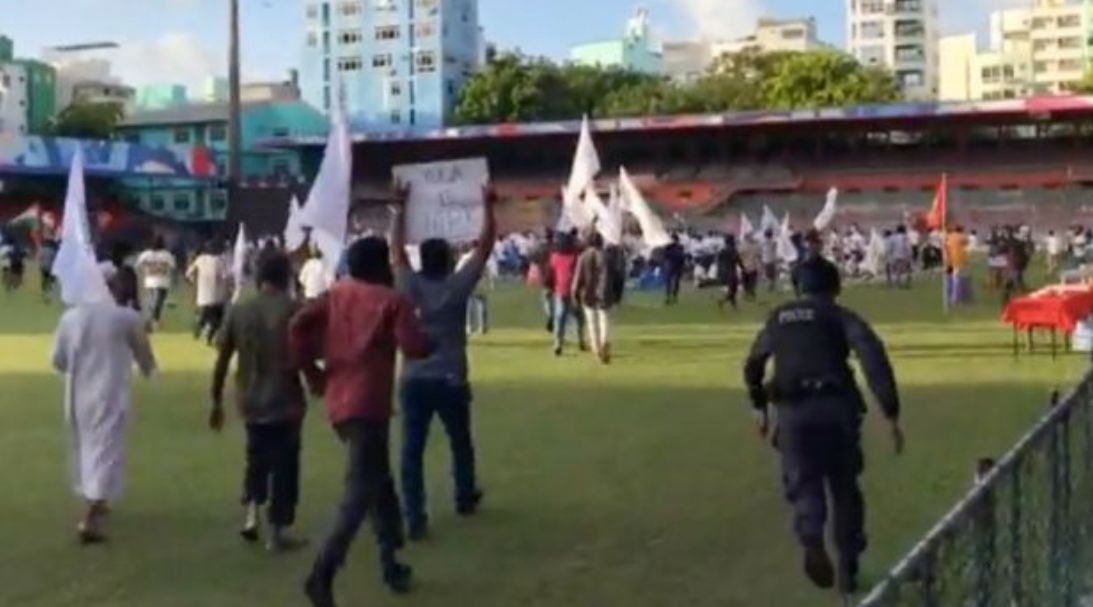 A mob attacked the participants of a yoga day event that was organised jointly by India and Maldives in Male on Tuesday morning, drawing a quick response from the Maldivian government and the Opposition which has otherwise been behind the “India Out” campaign.

The mob was bearing flags similar to those seen recently at a rally in Maldives that protested the denigration of Prophet Mohammed in India by now-axed BJP spokespersons Nupur Sharma and Naveen Jindal.

A video of the attack showed a group of men entering the national football stadium armed with sticks and flags as participants at the event were practising yoga. They could be heard shouting slogans and charging towards those practising yoga on their yoga mats, resulting in a melee in which the mob not only chased away the participants including diplomats but also ransacked the stalls arranged for refreshments.

Maldivian news agencies reported that police had to use tear gas to disperse the mob, six of whom have been taken into custody. “An investigation has been launched by @PoliceMv into the incident that happened this morning at Galolhu stadium. This is being treated as a matter of serious concern and those responsible will be swiftly brought before the law,” Maldives President Ibrahim Mohamed Solih tweeted.

An investigation has been launched by @PoliceMv into the incident that happened this morning at Galolhu stadium.

This is being treated as a matter of serious concern and those responsible will be swiftly brought before the law.

The event at Galolhu stadium was organised by Maldives’ ministry of youth, sports and community empowerment in collaboration with the Indian Cultural Centre to mark International Day of Yoga. The celebration was shifted to the football stadium at the eleventh hour after Male City Council cancelled the permit to hold it at Rasfannu — an artificial beach where such events take place — “due to complaints from many” about this particular event.

Maldives has been celebrating International Day of Yoga from its very inception in 2015. Though the conservatives in the Islamic country have had reservations about yoga, this is the first time the event has encountered this kind of hostility that seems to be the result of the now-banned “India Out” campaign of the Opposition coupled with the recent outrage over the denigration of the Prophet.

Despite spearheading the “India Out” campaign, the Progressive Party of Maldives (PPM) led by former President Abdulla Yameen — during whose regime Male backed the move in the UN to celebrate International Day of Yoga — has condemned the attack and sought to distance itself from the mob which many eyewitnesses say were carrying flags similar to those used at its “My Prophet” rally last week.

Maldivian news portal Sun said the PPM condemned the storming of the stadium and quoted party secretary-general Mohamed Tholal as stating that they had not orchestrated the attack: “Commenting on the matter, PPM’s Secretary-General Mohamed Tholal told Sun that the flags were very similar to the ones PPM had used. However, he said that he cannot confirm whether the flags were lent by the party at the moment. ‘It is possible that they are our flags. I do not know to say for sure whether we lent the flags,’ he had said.”

Late in the evening, the Maldivian police in a statement said: “The Serious and Organised Crime Department of the Crime Investigation Command is investigating the incident with utmost urgency. As of now, the evidence indicates that the demonstrators were using items taken from the office of the Progressive Party of Maldives.”