Milk and honey for schools

The Centre has asked the states to consider serving milk, milk products and honey with their school midday meals, explaining this can be a way of using up the country's surplus stocks of these foodstuff. 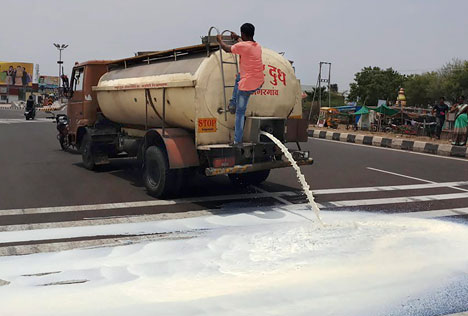 New Delhi: The Centre has asked the states to consider serving milk, milk products and honey with their school midday meals, explaining this can be a way of using up the country's surplus stocks of these foodstuff.

Nutritionists and health activists have welcomed the move but questioned the objective of exhausting surplus milk powder and honey. Some have cited the absence of additional funding as a deterrent to implementation, for the states would need to buy the milk and honey from the government cooperatives.

Rural health expert Abhya Bang welcomed the "win-win solution" that takes care of the nutritional needs of children and the difficulties that farmers and tribal communities face in selling milk and honey.

"Milk and milk products provide protein while honey has sugar and vitamin A," said Bang, chairperson of the Society for Education, Action and Research in Community Health, Gadchiroli.

Deepa Sinha, a Right to Food campaigner, said: "It's a good move but it should be a regular affair and not just when the government wants to exhaust its stocks."

She cautioned: "Without additional funding, the poorer states would not implement it."

Agriculture secretary Tarun Shridhar had on June 15 written to school education secretary Anil Swarup citing the bumper milk production that has "resulted in piling up of huge stock of skimmed milk powder and white butter".

He suggested milk be served as part of school midday meals to reduce farmer distress.

On August 8, V. Shashank Shekhar, joint secretary with the human resource development ministry, wrote to the chief secretaries of all the states and Union territories asking them to include milk, milk products and honey in school midday meals.

Milk was already a part of school meals in Karnataka, Madhya Pradesh, Haryana, Puducherry and Gujarat. But some states with huge quantities of surplus milk powder -such as Rajasthan, Maharashtra, Tamil Nadu and Punjab - are yet to decide.

Last year, the human resource development ministry had asked that schoolchildren be served with tur dal supplied by the consumer affairs department, which wanted to exhaust excess stocks procured by government agency Nafed.

So far, only Gujarat has complied while some states like Odisha have opposed the idea and many are still undecided. Tur stocks remain surplus.

Many of the poorer states are struggling to provide even the basic minimum of dal, vegetables and rice or roti to their pupils, Sinha said. Tamil Nadu, a better-off state, serves eggs.