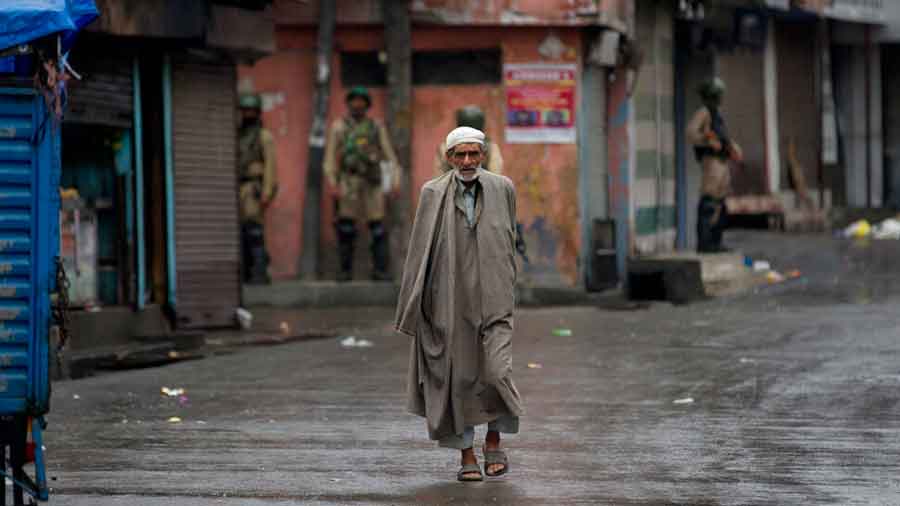 Official sources said there have been around a dozen militant attacks or gunfights between security forces and militants this year
File picture
Our Special Correspondent   |   Srinagar   |   Published 06.10.20, 01:32 AM

Two militants on a motorcycle killed two CRPF men and injured three others in indiscriminate firing on the outskirts of Srinagar in a grim reminder of how the city has emerged as the focus of militant activities since the scrapping of Article 370 last year.

Official sources said there have been around a dozen militant attacks or gunfights between security forces and militants this year, seen as a sharp escalation in violence in the city that witnessed fewer such incidents previously.

Sources said the bike-borne militants fired upon a road opening party of the 110 battalion of the CRPF at Kandipzal area of Nowgam bypass.

An official said the five injured were rushed to 92 Base Hospital in Srinagar where two cops succumbed.

The slain were identified as constable Shailendra Singh and constable driver Dhirendra Tripathi.

“The firing was brief but indiscriminate and the militants managed to escape by taking advantage of the movement of civilian vehicles on the road,” an official said.

Security forces rushed to the area in large numbers and sealed the entry and exit points to hunt down the militants.

Valley police chief Vijay Kumar claimed Lashkar was involved in the attack. He said Pakitani militant Saifullah and his local associate were behind the attack.

This was the second attack in Nowgam in less than two months. In August, militants killed two policemen in a nearby locality.

Kumar said militants were using the crowded and busy national highway to carry out attacks.

“Any retaliation can lead to civilian casualties and militants are taking advantage of this,” he said.

A series of attacks also took place in Pandach and Nowgam.

Suspected militants are believed to have killed lawyer-activist Babar Qadri at his home in Srinagar’s congested Hawal locality.

When the BJP-led government scrapped Article 370 in Jammu & Kashmir last year, it had claimed the move would end militancy in the region and bring peace, which has remained a far cry so far.