Advertisement
Home / India / Meal to see and pose with, not eat 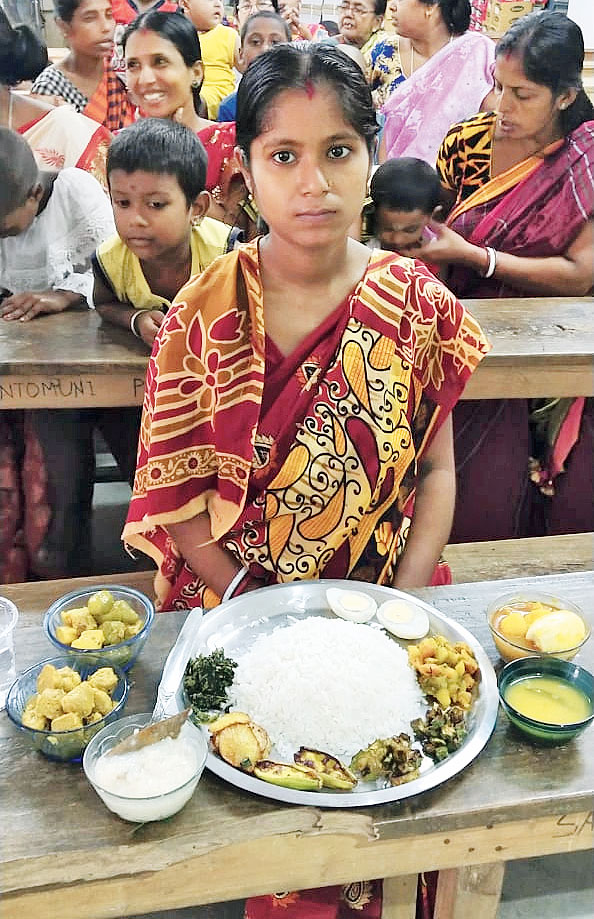 Pregnant women were made to sit before a sumptuous platter for a photo op before being handed food parcels and shooed away from a government event, meant to promote nutritional awareness among expectant mothers, in Nadia on Friday.

A complaint lodged by Biswajit Sandhukhan, husband of seven months pregnant Moumita Sandhukhan, 25, has spurred several others to step up too, saying they felt “humiliated” over their treatment at the Supushti Divas (Nutrition Day) event in Santipur.

Some 20-odd women had attended the event, held under the Integrated Child Development Services as part of a series of such programmes state-wide on Friday.

The complainants said they were asked to sit, one by one, before a platter containing rice, dal, four kinds of fried vegetables, soybean curry, egg curry and payesh; had their photographs taken and were then asked to leave. They were handed parcels containing a meal of eggs and rice to take home.

“I had not come for the food anyway. Following the officials’ behaviour, I did not even accept the parcel,” said Moumita, a homemaker, who has had two miscarriages.

“When I sat down in front of the plate, I was suddenly told not to touch the food because it was only for demonstration. They used the same platter again for the other mothers and took it away after taking their pictures.”

Her husband Biswajit, a sari weaver who earns Rs 8,000 a month, has called the treatment “inhuman” in his complaint to the ICDS project officer in Santipur.

The ICDS is a central programme implemented through state governments to provide food, preschool services, primary healthcare, immunisation, health check-ups and referral services to children under six and their mothers.

One of the goals of the ICDS is to spread nutritional awareness among pregnant women in rural areas, where poverty and ignorance has led to rampant malnutrition.

Sources said at least six babies aged six months had an experience similar to their mothers at the event, held at the Vidyasagar Vidyapith in Santipur. “Even the infants were offered a plate of anna prashan just for a photo,” one of the women complainants said.

State women and child development minister Shashi Panja had launched the programme in Calcutta. The state plans to hold the event on the fourth Friday every month for pregnant women in the presence of their husbands and mothers-in-law at local anganwadi centres.

The supervisor of the Santipur ICDS centre claimed that had she been present, the fiasco would not have happened. “It’s unfortunate and shocking,” Basana Halder said.

She could not explain, though, why only one platter was visible at an event supposed to serve sit-down lunches to all.

ICDS worker Panna Dey, who had placed the platter before the women, had a bizarre explanation: “It seemed to us that Moumita had a health condition, so we decided not to give her strong food fearing indigestion.”

She didn’t say why the rest weren’t served, either.

“We did not instruct them to arrange an extravagant meal or have pictures taken. The objective was sustainable eating. We will thoroughly probe this,” he said.

Government sources said the Supushti Divas events in the rest of the state had served nutritious but not over-elaborate fare.

Minister Panja said: “The idea is not to serve a one-off sumptuous lunch but to promote sustainable food habits among mothers and their children. I don’t know exactly what happened in Santipur, but I shall find out why only one platter was prepared.”