Advertisement
Home / India / Many farmers' issues need to be resolved: Tikait at mahapanchayat

Many farmers' issues need to be resolved: Tikait at mahapanchayat

The meeting, called by SKM, was planned months before the PM on Friday announced repealing the contentious agri laws 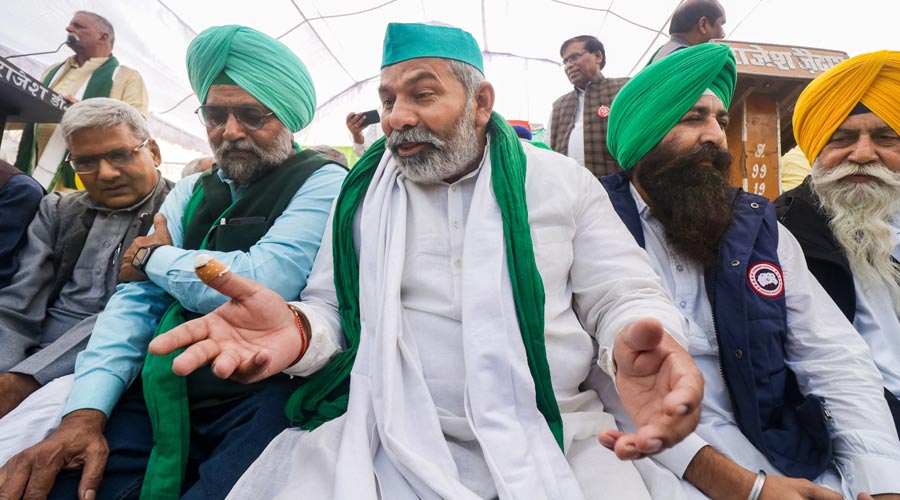 BKU leader Rakesh Tikait on Monday said that besides the repealing of the three agri laws, there are many issues of farmers that need to be resolved as a large number of them gathered here for a 'Kisan Mahapanchayat' to press their demands for a legal guarantee for MSP, among other things.

"It seems that after announcing repealing of the three farm laws, the government does not want to speak to the farmers. The government should make it clear that it has repealed the laws in the true sense and talk to us so that we can start moving to our villages," Tikait told PTI at the Eco Garden here, the venue for the 'mahapanchayat'.

The 'mahapanchayat' has been called by the Samyukta Kisan Morcha (SKM), an umbrella body of the agitating farmer unions. It was planned months before Prime Minister Narendra Modi on Friday announced repealing the contentious agri laws. The SKM, at a meeting in Delhi on Sunday, decided to stick to the date.

The SKM has put forth six demands before the government. Besides the legal guarantee for minimum support price, the farmers are demanding the removal of Union Minister of State for Home Ajay Mishra, whose son is an accused in the Lakhimpur Kheri violence, withdrawal of cases against farmers, building a memorial for the protesters who lost their lives during the agitation and withdrawal of the Electricity Amendment Bill.

The issues of MSP, seeds, dairy and pollution need to be resolved, Tikait said.

More than 750 farmers, mostly from Punjab, died during the protest against the agri laws, he claimed.

Shekhar Dixit, president of Rashtriya Kisan Manch, said, "The PM made the announcement about repealing of farm laws with an eye on the upcoming assembly elections in UP and other states, where the BJP is seeing power slipping away from its hands."

Despite the prime minister's surprise announcement, farmer leaders have maintained the protesters won't budge until the three contentious laws are formally repealed in Parliament.

Hundreds of protesting farmers have been camping at Delhi's Singhu, Tikri and Ghazipur borders since November 2020.

Rakesh Tikait on Monday compared Union minister Ajay Mishra with a "terrorist" and sought his arrest in connection with the death of four farmers in the Lakhimpur Kheri violence.

The Bhartiya Kisan Union (BKU) leader also opposed the proposed inauguration of a sugar mill in Lakhimpur Kheri by the minister, saying if he turns up there, farmers won't take their sugarcane to the mill.

The violence had erupted on October 3 when farmers were protesting the visit of Uttar Pradesh Deputy Chief Minister Keshav Prasad Maurya to Mishra's native place.

Four agitating farmers were run over by a vehicle allegedly carrying BJP workers.

Four others, including a journalist and two BJP workers, were also killed in the violence that followed.

Ajay Mishra's son Ashish Mishra has been named as accused in the case.

Addressing a "kisan mahapanchayat" here at Eco Garden, Tikait said the arrest of the minister is one of their main issues.

He said attempts are being made to make the minister a "hero" from a "qatil" (murdrer).

"If terrorists from Kashmir can be lodged in the Agra jail, then the murderer of farmers is also a terrorist and he too should go to the Agra jail," Tikait said.

Referring to the proposed inauguration of the sugar mill by Mishra, Tikait said if he goes there to inaugurate it, then no sugarcane will be taken to the mill.

"Rather, farmers will take the sugarcane to the office of the district magistrate, no matter how much losses they incur," Tikait said.

Tikait said after December, he will be visiting Lakhimpur Kheri for three days to meet families of the farmers killed in the violence.