After discussions with Sharad Pawar, the Bengal CM spoke about a strong alternative to fight ‘fascism’ without making any mention of the Congress 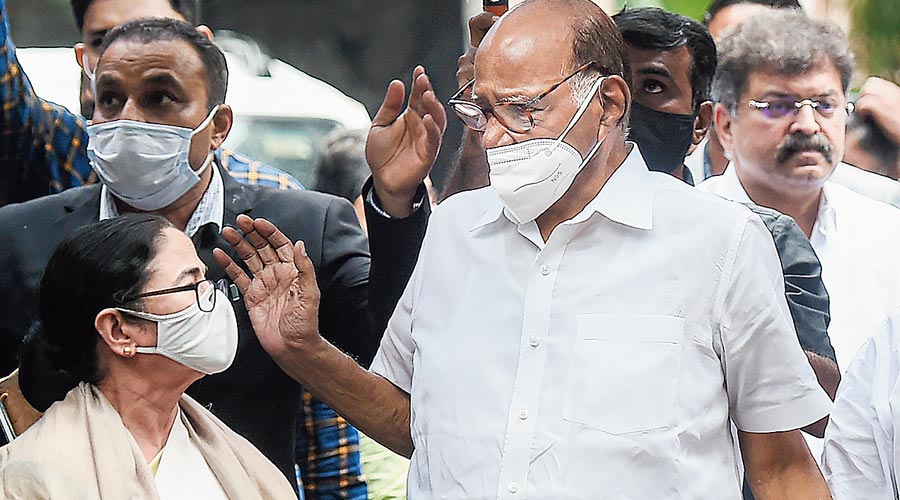 Mamata Banerjee on Wednesday said “there is no UPA (United Progressive Alliance) now”, the comment freighted with hints that the Bengal chief minister is keen to build a new Opposition axis to take on the BJP.

After discussions with NCP veteran Sharad Pawar in Mumbai, Mamata spoke about a strong alternative to fight “fascism” without making any mention of the Congress.

Asked about the Congress, she bluntly said: “If somebody doesn’t fight, what can we do?”

It was to another question about whether “the senior-most” Pawar should be given the leadership of the UPA that the Trinamul boss replied: “There is no UPA. We will sit together and form something else. Nobody can do it (fight fascism) alone. Whoever is strong in a state will have to be taken together.”

She had met representatives of the Shiv Sena on Tuesday as Maharashtra chief minister Uddhav Thackeray was not available because of post-surgery restrictions.

Pawar, who was present with her during the conversation with the media, took care not to send out any negative signals to the Congress.

He said: “Leadership is not the issue. Some alternative which enjoys the trust of the people will have to be evolved.”

Pawar’s tweet also spoke of “collective efforts”, which Congress leaders insisted was different in tenor and hint from the Trinamul’s hostile positioning.

Pawar tweeted: “Pleased to meet Chief Minister of West Bengal Mamata Banerjee at my Mumbai residence. We agreed upon the need to strengthen the collective efforts and commitment towards safeguarding democratic values and ensuring the betterment of our people.”

Pleased to meet Hon'ble CM of West Bengal Smt @MamataOfficial at my Mumbai residence. We Discussed various issues. We agreed upon the need to strengthen the collective efforts and commitment towards safeguarding democratic values and ensuring the betterment of our people. pic.twitter.com/ryrVH2hD6N

Neither Pawar nor any other Opposition leader has so far indicated any eagerness to chart a separate course by snapping ties with the Congress.

Through the day – first during a meeting with members of civil society and then with the who’s who of India Inc – the Bengal chief minister took care to explain the need for an “alternative” to rid the country of the “environment of fascism” created by the BJP.

“What Sharadji said is that there should be a strong alternative of those who fight,” Mamata made a general statement.

“What do we do if one is not fighting? We feel that everyone should fight,” she added after a brief pause, suggesting that the Congress was not doing its job properly.

Asked about Mamata’s remarks, the Congress general secretary in charge of organisation, K.C. Venugopal, said: “Everybody knows the reality of Indian politics. Thinking that without Congress anybody can defeat the BJP is merely a dream.”

Some senior Congress leaders reacted to the Mumbai comments in off-the-record conversations, insisting that Mamata was traversing a political path that would take her nowhere.

“She will get discredited as she is clearly harming Opposition unity,” one of them said, referring to a growing perception that her staunch anti-Congress stand would end up helping the BJP.

Although some Congress leaders conceded that there was no structure of the UPA at present, they were quick to add that the spirit of coalition did exist and that’s why coalition governments were in place in DMK-ruled Tamil Nadu, Shiv Sena-NCP-ruled Maharashtra and JMM-ruled Jharkhand with the support of the Congress.

A senior Congress leader said the RJD leadership too believed in the role of the Congress as a pivot around which an alternative to the BJP could be built.

“The Samajwadi Party is keeping its distance from the Congress at present because of the Uttar Pradesh elections but its attitude will concretise only after the results. A hung Assembly may bring the Congress and the SP together,” the leader said.

Mentioning all these possibilities, another Congress leader said: “Mamata should build on her stunning victory in Bengal and channel her energies towards strengthening the Opposition instead of weakening the Congress.”

The Congress is avoiding a direct public fight with Mamata because of the larger political objective of keeping all like-minded parties together. It hopes the coming Assembly results will have a chastening influence on Trinamul.

Congress leaders also confronted Mamata’s charge that the Congress wasn’t fighting, contending that the Modi-Shah juggernaut would have flattened every voice of resistance in the absence of Rahul Gandhi.