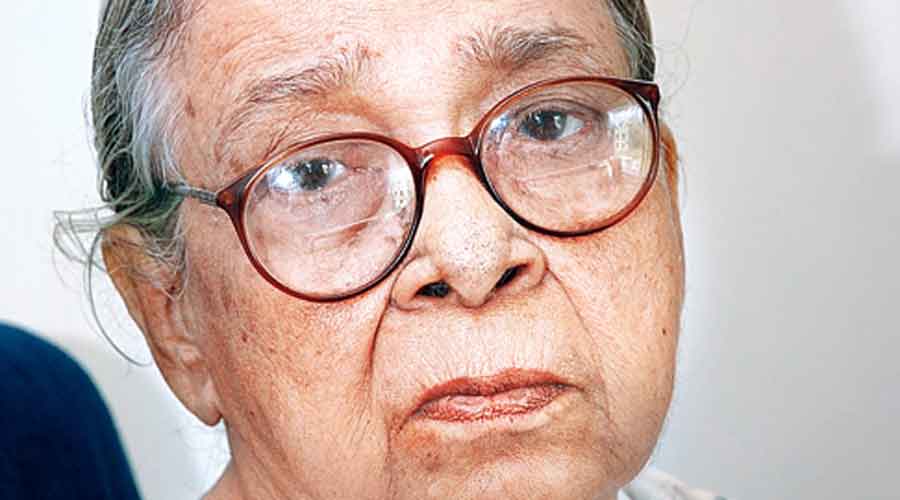 Mahasweta Devi’s short story Draupadi was axed from Delhi University’s English honours course because of its description of a rape, a campus official said on a day vice-chancellor P.C. Joshi used his emergency powers to approve syllabus changes for four subjects.

A university source conceded it was rare for the VC to use his emergency powers and bypass the executive council — which was to take the final decision on the controversial syllabus changes — but added that the authorities did not want any further “dissent”.

A university media release that defended the changes at length, suggesting the widespread criticism had hit home, said the varsity believed its syllabuses should contain material “which do not hurt the sentiments of any individual”. It did not name any particular text.

A member of the oversight committee that recommended the changes told The Telegraph on the condition of anonymity that Draupadi — which portrays a tribal woman’s struggle against oppression — had been dropped since it contains the description of a rape.

A statement issued by three dissenting members of the 130-member academic council — which had on Tuesday cleared the changes — slammed the comment.

“To use hurt sentiments as an excuse to delete texts is a blatant attempt to impose thought control of the dominant and privileged social groups,” said the joint statement from Rajesh Kumar, Mithuraaj Dhusiya and Biswajit Mohanty.

Draupadi is about Dopdi Mehjen, a Santhal woman who, along with her husband, murders rich landlords and grabs their wells, the main sources of water in their village.

She is captured by an officer who orders his men to rape her. Afterwards, asked to cover up, she refuses saying: “There isn’t a man here that I should be ashamed.”

Draupadi has been part of the Delhi University syllabus since 1999 “owing to its seminal academic value”, said a dissent note by 15 academic council members protesting Tuesday’s green light to the syllabus changes.

They underlined that the story also figured in the University Grants Commission’s “Model Syllabus 2019” for BA (Hons) English.

What Delhi University has found liable to “hurt the sentiments” in print has stirred emotions on stage and motivated in real life.

In her stage performance of Draupadi, celebrated Manipuri actor Sabitri Heisnam drops her clothes in a bold gesture of protest that paralyses the security forces and moves audiences.

Her performance is known to have inspired 12 Manipuri mothers to strip naked in a public protest in 2004 against the army, which was accused of raping and killing a woman.

Oversight committee chairman M.K. Pandit told The Telegraph: “We received complaints against the story Draupadi. I read the story myself.”

Sultana’s Dreams by Begum Rokeya has replaced Draupadi in the Delhi University syllabus.

The dissent note by the 15 academic council members alleged that procedures were flouted while changing the undergraduate syllabuses for English, history, sociology and political science.

It said the only competent authorities to frame or change any syllabus were the “committee of courses” of the departments concerned, and that varsity rules had no provision for any oversight committee in the matter.

It added that the oversight committee had no members from any of the four departments whose syllabuses were changed.

The dissent note criticised the replacement of the Chandrabati Ramayana — a feminist reading of the Ramayana — with Tulsidas’s version of the epic in an elective paper titled “Pre-colonial Indian Literatures” in the English syllabus.

Sukritharani’s poems Debt and My Body and two chapters from Bama’s autobiography, Sangati, have been replaced with the works of Ramabai, a writer from the dominant castes.

In a statement he tweeted along with the pictures of the two writers, Stalin said: “This practice of viewing such literary works either through the prism of party politics or communal agenda should be given up.”

He urged Delhi University to restore the two Dalit feminist writers’ works to the syllabus. Madurai MP Su Venkatesan of the CPM and the Dalit MP from the VCK, Ravikumar, too criticised the varsity’s decision.

The university release said: “Some issues highlighted by a section of media regarding the content of the syllabus are misplaced and unfounded as the syllabus of the course has been passed through a democratic process with the involvement of all the relevant stakeholders and necessary deliberations at appropriate forums.”