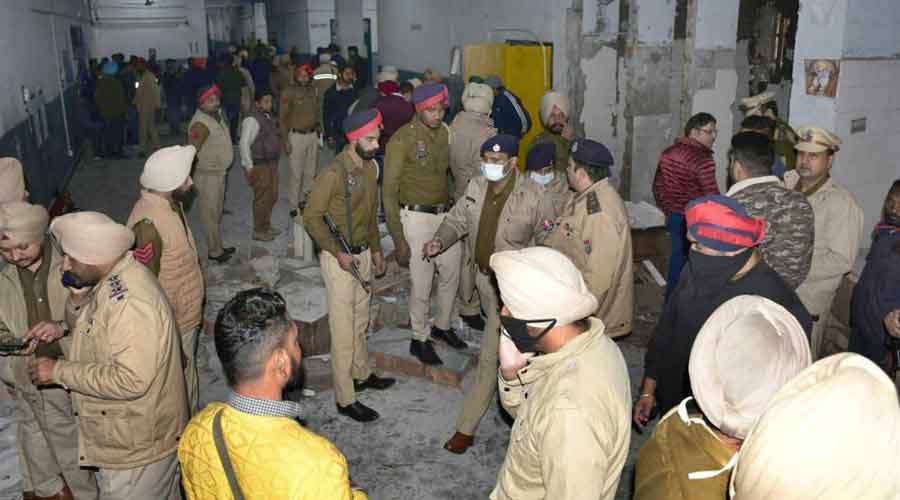 A bomb went off in the district court complex here on Thursday, killing one person and injuring five, prompting the Punjab government to declare high alert in the state.

Police suspect that the man killed in the blast in the second-floor bathroom was trying to set off the explosive device or might have been a suicide bomber.

As forensic teams and specialised agencies were being summoned to the site, chief minister Charanjit Singh Channi expressed apprehension that the blast might have been an attempt to create “anarchy” in the poll-bound state.

The Union home ministry has sought a detailed report from the state government, besides the findings of initial investigations.

The blast wrecked a wall of the bathroom, shattered window panes in adjoining rooms and broke windscreens of some cars parked below, triggering panic in the court complex.

Officials said the five persons, including two women, injured in the explosion were out of danger.

Channi, accompanied by deputy chief minister Sukhjinder Singh Randhawa and minister Bharat Bhushan Ashu, visited a hospital in Ludhiana to meet the injured. He also summoned a meeting later in the day in Chandigarh.

The blast comes days after alleged sacrilege bids at the Golden Temple in Amritsar and a gurdwara in Kapurthala followed by the lynching of two men.

Over the past few months, there have been cases of drones being spotted near the Pakistan border, with authorities suspecting that they could have dropped arms or explosives.

“Our police are capable of maintaining law and order,” Channi said. “But which agencies are trying to disturb Punjab’s peace will become clear as investigations are on.”