“The banking system is paralysed by fear of investigations. It leads to the hiding of defaults” 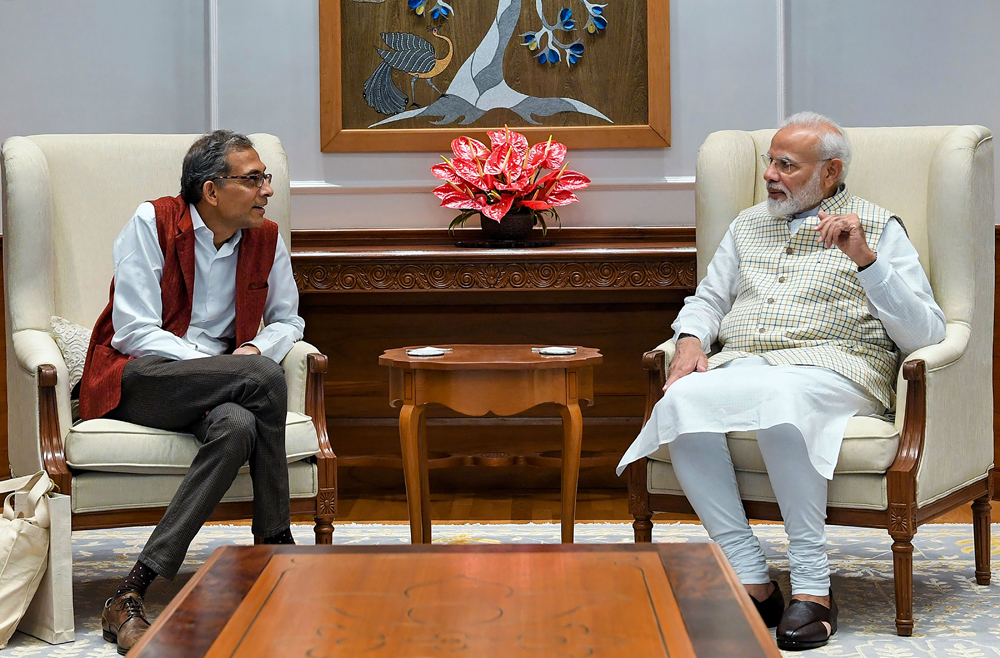 Nobel laureate economist Abhijit Vinayak Banerjee on Tuesday said the government should lower its equity in public-sector banks as part of the efforts required to remove a “fear psychosis” that has gripped the banking sector.

“The banking system is paralysed by fear of investigations. It leads to the hiding of defaults, which creates bigger problems,” Banerjee said.

“I want the government to have less equity in banks so that this fear psychosis in the banking sector is removed.”

He said that reducing the government’s equity shares in public-sector banks to below 50 per cent would free them from the Central Vigilance Commission’s oversight. If the government owns more than 50 per cent equity, the commission is empowered to investigate every individual loan default and “that is paralysing for bankers”, he said.

India’s banking system has for years been afflicted by bad loans which, according to central government data, stood at Rs 8.65 lakh crore in December-end 2018.

A PTI report cited Union finance minister Nirmala Sitharaman as saying on August 30 that the profitability of public-sector banks was improving as their total gross non-performing assets had dropped to Rs 7.9 lakh crore by March-end 2019.

“First the bank is fine, and suddenly there is a problem. That is a sign of the fact that balance sheets are somehow not picking up enough information. We should be vigilant about this…. We should be able to stop it way ahead,” he said.

Banerjee added that lowering government equity would remove the CVC from being an additional layer of checks and balances in the banking sector.

“Checks and balances are part of the problem,” said the MIT professor, who shared the 2019 Economics Nobel with Esther Duflo, fellow MIT economist and his wife, and Michael Kremer of Harvard University.

“The checks are so heavy-handed that they make people either not want to lend, (or) even if they lend, they think it’s a mistake and they bail out their clients because if I give you another loan and you pay my loan, I’m kind of covered. So they keep postponing the loan until it becomes impossible and it collapses 10 years later. So we’re seeing a lot of accumulated default partly because of the way it is regulated,” he added.

Banerjee had earlier met Prime Minister Narendra Modi in the morning. In a media interaction after the meeting, the economist declined to take questions on the state of the economy and refrained from commenting on the government’s policies, PTI reported.

“I’m going to say this and I’m going to take no more questions about this,” Banerjee said. “The Prime Minister started by cracking a joke about how the media is trying to trap me into saying anti-Modi things. He has been watching… you guys, he knows what you are trying to do…. So, I think, stop.”

A video recording released by the Prasar Bharati News Service quoted Banerjee as saying he felt privileged to have had the meeting with Modi. “He was kind enough to give me quite a lot of time and talk about his way of thinking about India,” he said.

“It was quite unique. He talked about the way he sees governance, and why the mistrust of the people on the ground colours our governance and how it therefore creates structures of elite control over the governance process,” Banerjee added.

“In that process, he also very nicely explained how he’s trying to reform the bureaucracy to make it more responsive to understand ways in which people’s views need to be taken into account….” It is important for India to create a bureaucracy that lives on the ground and gets its stimulus from how life is on the ground. Without that, we get an unresponsive government.”

In Siliguri, Bengal chief minister Mamata Banerjee recalled the economist’s association with a state government project. “We are proud of his achievements. But do you know what he has done for us?” Mamata asked during an administrative review meeting. “We had the idea to involve him in a task that later drew so much attention.”

She requested chief secretary Rajiva Sinha to explain the economist’s association with the government-run training of informal health-care providers.

Sinha described how Banerjee and Duflo had studied the social impact of this training, which encouraged the state government to start training around 1.2 lakh informal health-care providers.

Additional reporting by our Bengal bureau