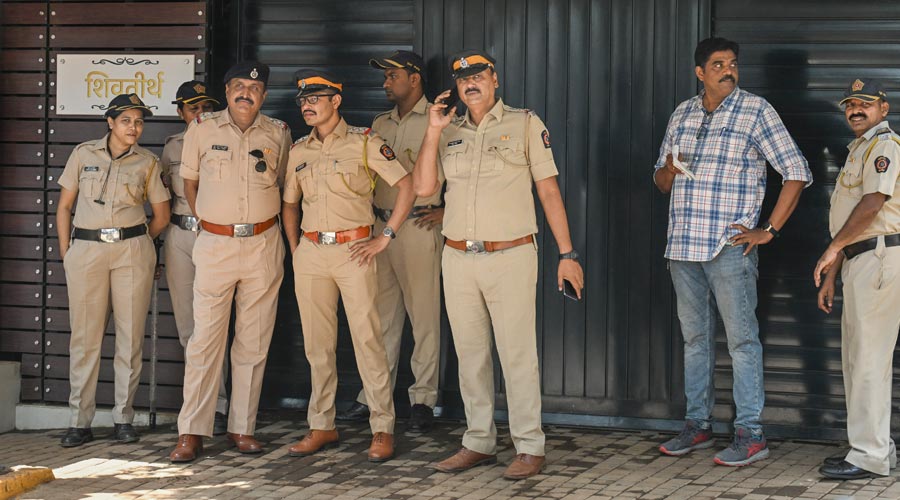 However, MNS functionaries Sandeep Deshpande and Santosh Dhuri managed to quickly leave from the spot in a vehicle when a police team tried to catch them.

A female police constable fell down while taking the action against MNS workers outside Thackeray's home in Shivaji Park area.

In Pune also, eight-nine MNS workers were detained when they came out of a Hanuman temple after performing 'aarti', the officials said.

Heavy police security was deployed in Mumbai in the wake of Thackeray's call for silencing loudspeakers atop mosques.

Police deployment outside Thackeray's residence 'Shivtirth' in the Shivaji Park area was also enhanced and barricades were placed on the road for smooth traffic movement.

After meeting Raj Thackeray on Wednesday, Deshpande came out and was speaking to reporters when a police team came towards him and tried to take him into custody.

However, Deshpande quickly sat in an SUV and left from the spot.

The police detained some other MNS workers and took them to the Shivaji Park police station in a private taxi, the official said.

Those detained were earlier served notices earlier under various CrPC sections as a precautionary measure, he said.

In neighbouring Pune, MNS state secretary Ajay Shinde and some others were detained, officials said.

"We have detained eight-nine MNS workers, including Shinde, as a precautionary measure after they came out of the Khalkar Maruti temple in the city," a senior official from Vishwambaug police station said.

There was heavy police deployment at key places in Pune.

Before being detained, Shinde told reporters that 'maha aartis and recitation of the Hanuman Chalisa were being done at various places in the city, as per directions of MNS chief Raj Thackeray.

"We performed the 'maha aarti' and recited Hanuman Chalisa at the Khalkar Maruti temple," said Shinde.

Meanwhile, another senior police official said most of the mosques in Pune refrained from playing the early morning 'azaan' on loudspeakers, following the Supreme Court guidelines.

There was no incident of playing the Hanuman Chalisa on loudspeakers near mosques in Pune during the morning 'azaan' time, he said.

The official also said the police had held discussions with people from both sides and received a positive response, hence there was no need for any strong action so far.

Pune Police Commissioner Amitabh Gupta said since Tuesday evening, the entire police force, including senior officers, was out on roads and that the situation was normal.

There was no report of any untoward incident so far, he added.

Stepping up his attack on the ruling Shiv Sena in Maharashtra, MNS chief Raj Thackeray on Wednesday tweeted an old video of late Sena founder Bal Thackeray in which the latter was seen saying the day his party comes to power, praying of namaz on roads will be stopped and loudspeakers from mosques will be removed.

In the 36-second video tweeted on Wednesday by the MNS chief, Bal Thackeray was seen draped in a saffron shawl with the Shiv Sena symbol in the background.

The Sena supremo was seen in the video saying, "The day my government comes to power, praying of namaz will be stopped because religion should be such that it doesn't create an impediment in national development."

"If our Hindu religion is creating an impediment then tell me, I will take care of it...Loudspeakers will be removed from masjids," Bal Thackeray said in the old clip.

The Sena founder died in November 2012.

The video clip comes after MNS workers played Hanuman Chalisa on loudspeakers near some mosques on Wednesday to protest the use of loudspeakers during 'azaan', following instructions from Raj Thackeray.