None of those who have lost their homes have received the immediate relief of Rs 25,000 yet 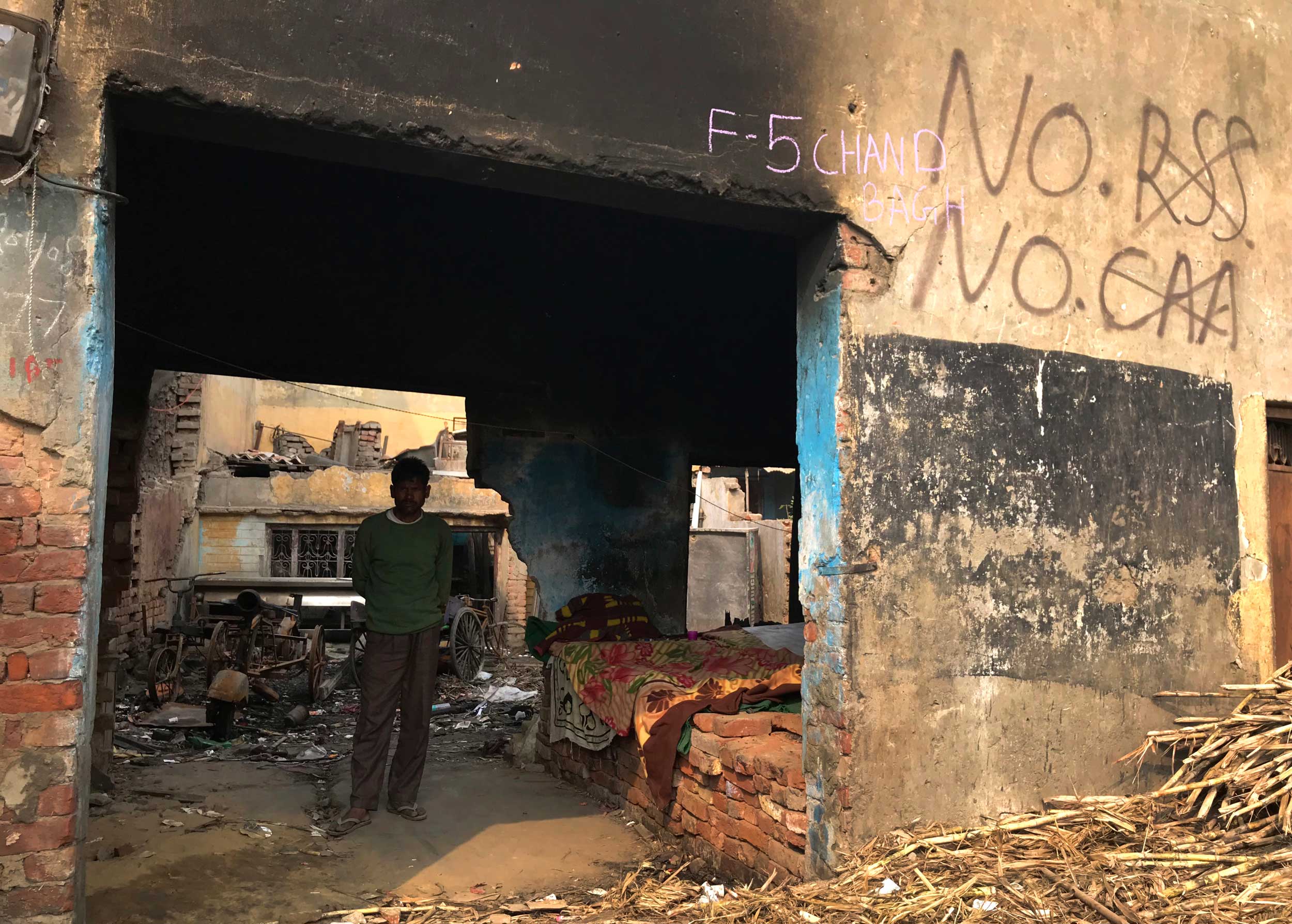 Asif Ali walked down Lane 4 in Bhagirathi Vihar, pointing out each of the seven homes and businesses owned by Muslims that were burnt down on February 25.

“The mob was made up of outsiders, probably from (neighbouring) Ganga Vihar. But our neighbours didn’t put out the fires. I saw them from our terrace, pointing out our homes to the mob.”

The electric rickshaws that gave Asif’s family their livelihood are destroyed too. Most of the belongings at their four-storey home are charred. The family of six, including women and children, had slithered down ropes and escaped around 8.30pm, more than three hours after the street battle had begun.

“I kept calling the police for two hours. One of the officers responded, asking what they could do to help us. We were choking on the smoke from the burning lower floors, but no one came.”

Flanked by a sewer that empties into the Yamuna, the locality is a stone’s throw from a site where a protest took place against the new citizenship matrix for around two months, until last week’s riots.

Hindus and Muslims live alongside each other here, unlike most localities where they are segregated. After the riots, such segregation is a possibility in this neighbourhood too.

M. Nazim says his neighbours were more helpful than Asif’s. “I was returning from the mosque after namaz when I saw two groups throwing stones and firing at each other. I hid in a Muslim home in Mustafabad (across the road),” he said.

“Thankfully, my wife and the others at home had gone to a wedding. My Hindu neighbours called me later in the evening and said my house was in flames. They doused it with water.”

Nazim has lost his printing shop, motorbike and kitchen to the flames. “I can’t sleep at night. I keep shivering in fear. I see people standing guard in front of their homes at night, but sometimes I feel they may turn into a mob.” 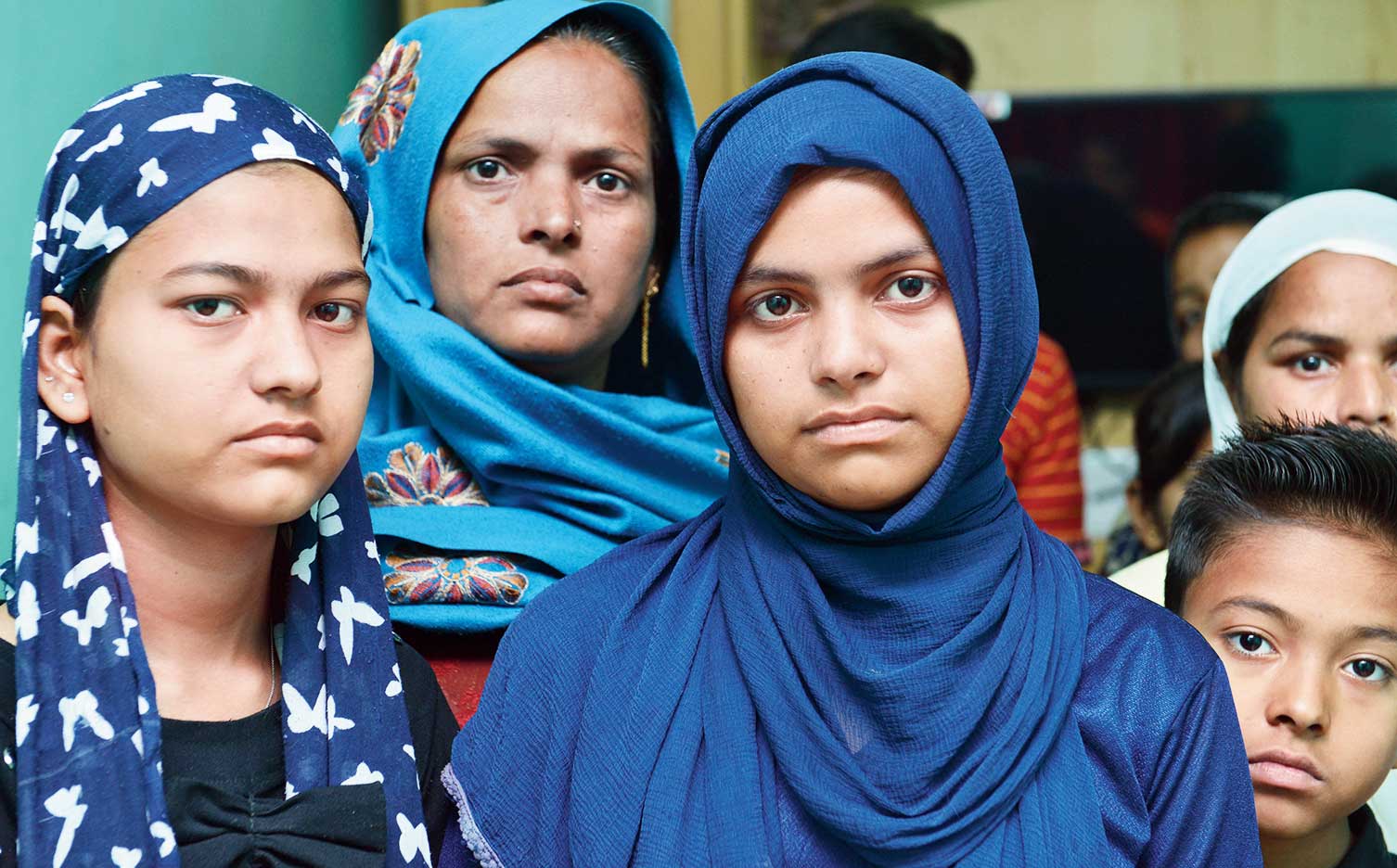 Anam (left), a Class XII student, and her sister Iram with their mother Afsana (centre) in northeast Delhi on Monday. Having lost everything to arson in the riots and little government help trickling to the family, they have been sheltered by a Muslim family in Mustafabad. Bereft of admit cards and school uniform, the two sisters could not appear in the ongoing board examination.

Shaukat Ali, 65, has rented out a ground-floor room at his house to a Hindu-owned motorcycle parts shop. His joint family of seven had to climb onto other terraces to escape the blaze ignited by the mob.

A stone hit his four-year-old granddaughter’s head while they were fleeing.

His tenants Ramesh Chand and his son Prakash have lost motorcycle springs worth Rs 80 lakh.

“They had pictures of Hindu gods displayed inside their shop. The mob should have spared them, at least. My house is destroyed; we are staying with relatives. Sushil, my neighbour’s son, tried to persuade the mob to spare our home but was shooed away,” he said.

None of those who have lost their homes have received the immediate relief of Rs 25,000 yet. Minister Rajendra Pal Gautam visited the area on Monday and revenue officials helped the victims fill in the claims forms.

“If the system worked well, even the riots wouldn’t have happened,” said Zafar, who has lost his hardware store.

An ironing shop and a clinic, both owned by Hindus, were torched in the neighbouring Lane 1. Kamlesh Kumar, who runs the ironing shop, said he didn’t blame anyone. He hasn’t let his three sons leave home after the riots.

His wife looked down the lane at her Muslim neighbours’ homes and said: “No, they did not harm us, but who knows what will happen once the police leave.”

In neighbouring Shiv Vihar, mobs fought a pitched battle on February 25 that left the place resembling a war zone.

Ashok Tomar had silver jewellery worth Rs 4 lakh looted from his shop, yet he found the courage to open on Monday.

“When I saw the Muslim mob, I pulled down my shutters and fled. Yes, I felt uneasy opening the shop today but life must go on. Local Muslim boys had informed me when the shop was being looted. I told them, ‘Let it be, son, I will be back’.”

Dharmendra Sharma’s nearby sweets shop too reopened on Monday. He had shut it in such a hurry on February 25 that three of his employees got scalded, spilling on themselves hot oil from a cauldron full of samosas.

“Sixty per cent of my customers are Muslim. There is very little effort from any community or politician for reconciliation, which is why I feel scared to sit here. But I know my customers, and they like my sweets,” he told The Telegraph.

In a part of Bhagirathi Vihar untouched by the riots, a group of Hindu and Muslim day labourers sat together at a crossing.

“We are safe because we are united. Nobody pointed out anyone’s house to any mob. But for a week now none of us has found work, as everything around us has gone up in flames,” one of the labourers, Anwar, said.