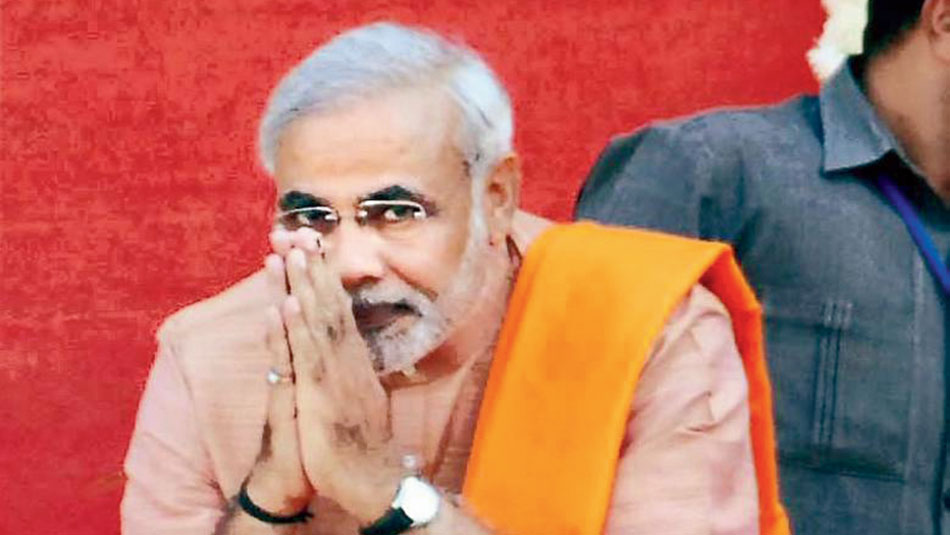 During the 2014 Lok Sabha election campaign the BJP kept harping about bringing “the Gujarat model” to the whole country if Narendra Modi were elected Prime Minister. Five years on this is the one promise that Modi has fulfilled. The only difference is it is not the much tom-tommed development model of Gujarat that everyone expected that has been replicated across India, but the one of divisiveness, fear and hate.

Half a decade ago, people in the far corners of the country who had never set foot in Gujarat could tell you about the wonders of the western state thanks to the dozen years of Modi rule. The BJP won its first ever majority in the Lok Sabha because voters hoped that Modi would bring Gujarat-like development to their towns and villages.

The promises of development have remained unfulfilled and the “Gujarat model” is no longer mentioned — not by the BJP nor the voter. The Rs 15 lakh in every bank account and two crore jobs every year have been cast aside as mere “jumlas” by the master strategist Amit Shah. In its place there is an aggressive campaign, being fought on the basis of strident Hindutva and a false narrative of a nation at war. The level of political discourse has dropped to an all-time low. The slogan “sabka saath, sabka vikas” is long forgotten and in its place there is division and polarisation in society.

What India has seen in the last five years, Gujarat has been experiencing for the last two decades. The demonising of the Muslim as a gangster, criminal, terrorist started in Gujarat from the 1990s and reached its nadir with the massacre of Muslims in the post-Godhra riots of 2002. Gujaratis were taught to despise the nine per cent of their co-patriots as unreliable, dangerous and of course anti-national. They were not worthy of hiring, doing business with nor having as neighbours.

Muslims were shunted to the fringes of society, unwanted and unnecessary, except for at election time when they could be used as punching bags to instil fear into the hearts of the Hindu community. They were the enemy within — all anti-Indian Pakistanis. As far back as 2002 during the Assembly elections, Modi began referring to Gujarati Muslims as agents of Pakistan and “merchants of death”. As chief minister of the state, Modi called the relief camps set up for lakhs of homeless Muslims after the riots “child producing centres” and “baby making factories”. Modi made snide remarks of “Hum paanch, hamare pachees”, feeding into the myth that all Muslims have four wives and 25 children and hence will outstrip India’s Hindu population very shortly.

Modi and Shah from their days in Gujarat accused all Opposition parties of “Muslim appeasement”. Mulayam Singh Yadav of the Samajwadi Party was referred to as “Mian Mulayam” a la “Mian Musharraf” by Modi and the Gujarat Congress was successfully branded a Muslim party. Even in the most recent Gujarat Assembly elections of 2017, Shah warned of bringing back the rule of “Latif mian, Babu mian and all the other mians” if the Congress came back to power. Abdul Latif was a bootlegger who became a don in the 1990s and was arrested, jailed and finally killed in 1997 by the Ahmedabad police in a fake encounter. The only relevance that a man killed in 1997 could have in an election campaign in 2017 is for polarising and scaremongering. It diverts attention away from real issues of unemployment, inflation, economic recession and agrarian crisis and frightens the majority community into voting for the BJP.

Modi has shown disregard for public accountability from his days in Gujarat and learnt very quickly how to play the victim card. When asked questions about his dubious role in the massacre of 2002, he complained of being “bullied” by the rest of the country. He was quick to deflect the criticism of his actions into a censure of the whole state. Any questioning of Modi was declared “an abuse of Gujarat and five crore Gujaratis”. It is from here that he began to speak of himself in the third person and Modi became synonymous with Gujarat and having stepped up to a bigger canvas, now he would like to be synonymous with India.

From his tenure in Gujarat, Modi quickly realised the importance of a pliant media. He either bought or browbeat Gujarat’s media barons such that they stopped doing their job of questioning his government and instead became an important wing of his propaganda machinery. He blocked out the press and ordered his ministers to do the same. The same tactic has been used in Delhi. One of the first orders that he gave as Prime Minister was to tell his ministers that they must not talk to the media. The press would be “managed” by the Prime Minister’s Office.

His treatment of the fourth estate is very akin to his disdain for the legislature. During his 12 years as chief minister, Modi ensured that the Assembly barely met. When the few sessions were on he would prefer to sit in his office rather than attend the House. In the last five years Parliament has seen very little work and ironically much of the stalling has been engineered by the government, rather than the Opposition.

Gujarat was fast developing long before Modi became chief minister, but he was quick to appropriate the successes of his predecessors and the people of the state as his own — just as he is quick to take credit for the successes of the armed forces. Not a single leader of the BJP dares to mention a single achievement of the party, however big or small, without saying the phrase “under the strong leadership of Prime Minister Modi”. That is his style. All bouquets are for him, but brickbats must be transferred to everyone but him.

The veneer of “development” that was stuck on Modi in 2014 has faded and his real face of a divisive man stands exposed today. The BJP/RSS have always considered Gujarat their Hindutva laboratory and over the last three decades, their successful experiments have kept them in power in the state for 23 years. Modi and Shah have brought all the tricks they used in Gujarat to Delhi and would like a similar run. This is and always was the real “Gujarat model”.

Enabling Narendra Modi: Then and now