Enabling Narendra Modi: Then and now 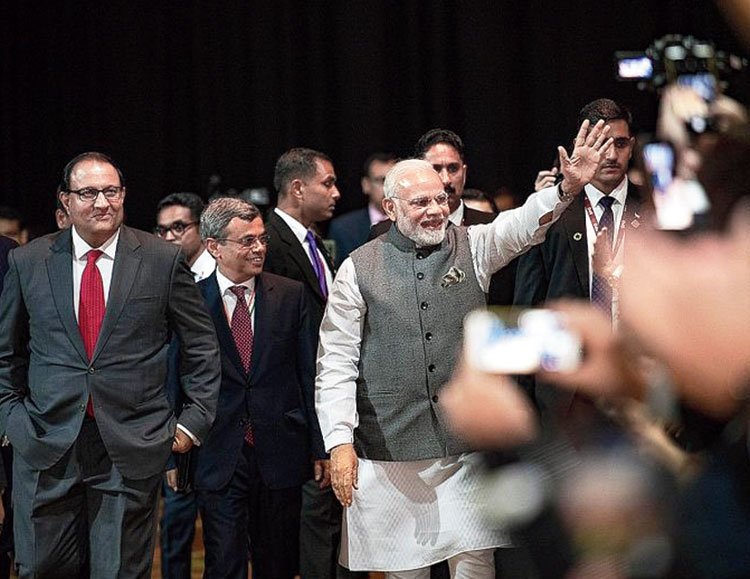 In the run-up to the general elections of 2014, there was an intellectually significant endorsement of Narendra Modi by public figures who saw themselves as liberals. They came from different backgrounds — corporate leaders, marketing mavens, economists, policy wonks, stockbrokers, national security experts, men of letters — but what they had in common was a willingness to embrace, even celebrate, a man who, till a few years before 2014, had been politically untouchable for men and women of their ideological stripe.

The explanations they offered for welcoming Modi’s rise to power were of two broad sorts. One, Modi’s authority as a mass leader was seen as a welcome contrast to Manmohan Singh’s prime ministerial style, which was that of an unelected technocrat beholden to dynastic patrons. The corruption scandals that had beset the United Progressive Alliance government in its second term and the way they were etched into public consciousness by Arvind Kejriwal’s expert use of Anna Hazare as a mascot for Gandhigiri, helped inflate Modi’s image as a strong, savvy incorruptible administrator.

But the more important reason they cited for supporting a man who had once been denounced as damaged goods from Godhra, was their belief that Modi was the only political leader who could revive India’s economic growth story. Modi, the economic reformer with the political muscle to back up his market reformer convictions, would restore India’s Asian tiger credentials, deregulate the economy and, by creating jobs, cash out India’s demographic dividend.

A few of these liberals made their support for Modi clear before the 2014 election. One smooth worthy disarmingly admitted that Modi was communal but still endorsed him because, he argued, it was elitist to prioritize secular scruple over economic growth. Such Faustian candour, however, was rare. Most other converts to Modi’s cause chose to emphasize his reformist credentials as exemplified by the Gujarat Model.

But there were other public intellectuals who welcomed Modi after his election for reasons related to democracy. In this argument, the play of electoral politics, the back-and-forth of democracy had given Modi and the Bharatiya Janata Party their turn at the wheel and liberals needed to accept, even welcome, their instatement. Not to do so would amount to being the political equivalent of a bad sport. Given the size of Modi’s mandate, to deny him political legitimacy by constantly harping on the Gujarat pogrom would be to devalue democracy and due process itself. Besides, historically literate liberals needed to remember that conservative strongmen could help lay strong foundations for democracy, France’s Fifth Republic being a case in point. Simply put, the case being made here was that Modi’s government needed to be given the benefit of the doubt by sceptical liberals because he had campaigned on a platform of development for everyone and deserved a honeymoon period.

This was a mistake for reasons that should need no elaboration but are worth listing because the 2019 elections are imminent and recognizing an error is the first step towards not repeating it. Punditry is a minor but performative skill and the temptation to surprise readers and confirm a reputation for maverick independence is one that should be resisted. Pundits who were not trying to impress their readers with contrarian cleverness and who claimed that they genuinely believed that a party as feral as Narendra Modi’s BJP would be domesticated by all-India office into a centre-right reforming party, were either obtuse or disingenuous. Some of these figures have, in the course of Modi’s term in office, moderated their earlier enthusiasm for the prime minister. But they haven’t offered their readers an intellectual accounting for their change of heart.

The reason such an accounting is overdue is best illustrated by analogy. When turn-of-the-century liberals in America joined the war against terror and became enthusiastic cheerleaders for the invasion of Iraq, in the aftermath of that catastrophic intervention, there was an extended conversation about where they had gone wrong. This was important not for the good of their souls nor because it let critics of the invasion enjoy a spasm of schadenfreude, but because these mea culpas were a guide to future action. Military interventionism didn’t end with the Iraq war just as violent majoritarianism is unlikely to end with the 2019 elections, so it’s worth knowing if the reasons offered by one time supporters of Modi for their disillusionment make sense.

The lion’s share of the Iraq war mea culpas weren’t admissions of error at all. They were a form of deflection. They usually went like this: the moral basis for the invasion of Iraq was utterly sound but its execution was criminally botched. Thus, the liberal who cheered on the invasion was to be chided for credulity not damned for criminal hubris. This is a good example of a dishonest alibi masquerading as contrition. It’s useless as a guide to action because it leaves the doctrine of liberal interventionism unmodified by experience.

In the same way, such explanations as are offered in passing in op-eds or on social media for disillusionment with Modi aren’t explanations at all, they are ways of side-stepping the elephant in the room: the attempted reconstitution of the republic by a rampant majoritarianism. The standard explanation offered by the liberal Modi supporter for being less keen on him now is that he hasn’t lived up to his expectations of him as an economic ‘reformer’. It’s a convenient explanation that has the merit of consistency. If the stated reason for, say, Meghnad Desai’s early admiration for Narendra Modi was his potential as an economic manager, it’s reasonable for him to now write that he has gone off him a little because his government has lost two competent RBI governors and mismanaged the economy. This allows Desai and his ilk to leave lynching, cow mania, the BJP’s assault on universities and the elevation of a man as extreme as Adityanath unaddressed: the economic rationality that drew them to Modi becomes a neat explanation for their current alienation.

This is, like those faux apologies for the Iraq war, an eyes-averted alibi, not a useful or honest admission of error. It doesn’t address the refusal of these pundits to weigh the damage an explicitly majoritarian political party could do to the institutions of a democracy, their refusal to see that integral to the Gujarat Model was the ruthless suppression of dissent and the absolute subordination of minorities. To accept this economistic explanation is, logically, to accept that if Modi had delivered on his economic promises, his elevation of a fringe Hindu monk to Uttar Pradesh’s chief ministership, his silence over lynchings, his bid to re-write the citizenship law to smuggle in a religious test for citizenship, the brazen communal public utterances of his party’s officials, legislators and ministers, should have been overlooked as political static, a series of minor noises off.

That isn’t, or shouldn’t be, acceptable. When a pundit argues that a majoritarian like Modi deserves a first-let-him-do-his-job benefit of the doubt from liberals, he can’t baulk when Adityanath’s partisans ask for the same indulgence. To have supported Modi for his potential as a market reformer wasn’t a sin but to refuse to acknowledge that the problem with that support was that it allowed a vicious majoritarianism a free ride, is to be deliberately blind after the event. That’s unforgivable: to refuse to reckon honestly with the past is to corrupt experience itself.