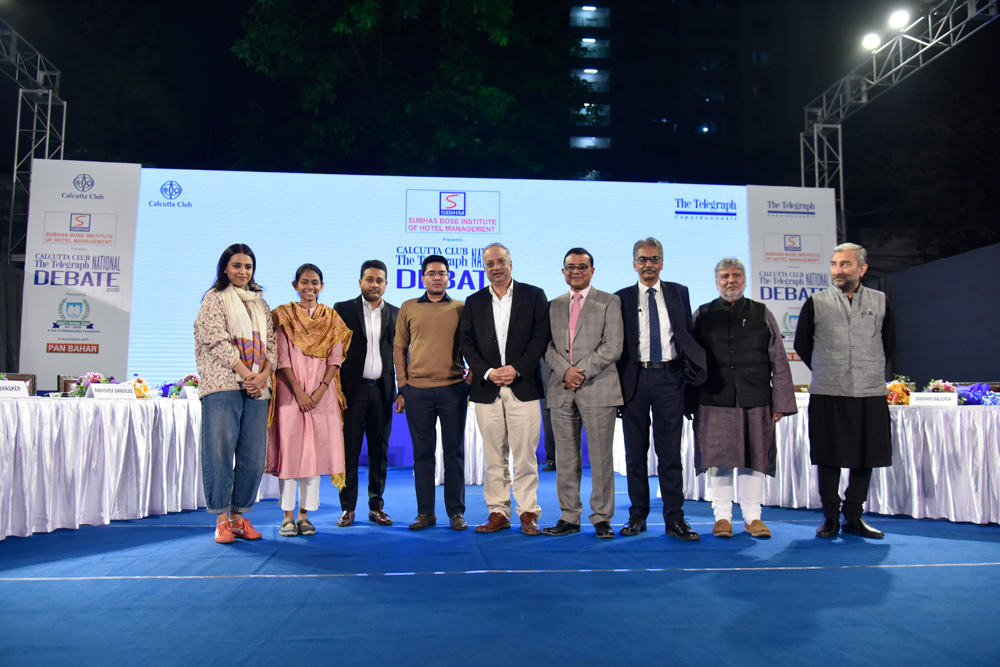 Does India have a new class of citizens called “anti-national”?

On Saturday, 6pm, six speakers will battle it out with words to determine if “In today’s India, dissent has been made anti-national”.

The occasion is the Calcutta Club The Telegraph National Debate 2020, presented by Subhas Bose Institute of Hotel Management, powered by Calcutta Business School, a unit of Shikshayatan Foundation, in association with Pan Bahar.

THE SPEAKERS AGAINST THE MOTION

The verdict: The motion, 'In Today's India Dissent has been made Anti-national', was carried at The Telegraph National Debate 2020 at the Calcutta Club on Saturday.

Moderator Dr. Kunal Sarkar ruled that the show of hands of those in the audience was most emphatic to signal that dissent has indeed been made anti-national.

THE SPEAKERS FOR THE MOTION

⚫ To round up, Abhishek Banerjee takes the stage.

⚫ Preach what you practice. Why are you talking ethics and nationalism.

⚫ Here, a BJP member like Kuldeep gets away with rape. Yes, you'll kicked him out of the party. But when? 6 months back. The Unnao rape happened back in 2017.

⚫ Raj Bhavans in today's times are being used as retirement houses for BJP members.

⚫ To round up, Sushil Pundit takes the podium.

⚫ Anyone protests, anything happening at universities, and you want to pin it on the Prime Minister.

⚫ PSA is an act that was introduced by the previous government. And now, looking at the Kashmir situation, these people are only saying how can these dignitaries be detained at home under the PSA.

An actor and who is known to speak her mind, Swara has been a part of major national debates and discussions involving human rights, the right to dissent among others. “What do we do in a society when we are more bothered about the fact that a stand-up comic heckled someone in a flight than we are bothered by the fact that people are allowed to roam around with guns and shoot?” Swara asked an audience in Mumbai earlier this month. She is often the target of choicest abuses from a troll army. But the alumnus of Delhi’s Miranda House and JNU is not the one to back down.

He loves dogs. Even more militant dogs. The most militant of the 11 at his home is named Goeth, after Amon Leopold Goeth, the Nazi concentration camp commander whose practice of shooting inmates is depicted in the 1993 film Schindler’s List. “My Goeth used to be unpredictable like that one,” he had once told The Telegraph. Goeth is no more. His decision to call police to JU around midnight to break a student siege had triggered a series of events rarely seen before on a campus.

⚫ Dissent is everywhere, in a govt, a political party, in your home. You should know how to express dissent.

⚫ Dissent gave birth to The Calcutta Club. That is the way to tackle dissent. Not by waving flags on the street.

⚫ Dissension is handled in many ways... In a democracy, dissent is a corner stone and not the other way around.

⚫ Swara Bhasker for the motion.

⚫ Thanks to the ones against the motion. I have not only forgotten my English language but whatever knowledge I grew up with.

⚫ Dissent is natural in a country like India where there is so much diversity.

⚫ Dissent is being criminalised in the country.

⚫ We are living in state where you will be judged based on your beliefs.  We are facing  a situation where a govt makes criminals of anyone in the name of national security.

⚫ The government today is waging war on citizens because they do not agree with them, distributing sedition charges like Reliance Jio phone connections.

Industrialist, once a friend of the Left and now a leader of the BJP, Shishir Bajoria knows obduracy is not a virtue in public life. When he made the switch in August 2014, Bajoria said: “The BJP is the new order that can bring about a change in Bengal. It’s Narendra Modi who will steer this change. That’s why I am joining the BJP…. Parivartan ka parivartan karna hai aur ab ek hi party hai.”

The student leader had 16 stitches on her head after being beaten with iron rods during a January 5 assault on JNU by masked goons. The next day, she was back on the campus with a heavily bandaged head and arm. “Every iron rod with which you have beaten up students will be given back by our debate and discussion,” the Durgapur girl said. Saturday’s stage will give her another chance to debate.

The government today is waging war on its citizens because they do not agree with them, distributing sedition charges like Jio phone connections: @ReallySwara at The Telegraph Calcutta Club National Debate 2020. #TTDebate2020

In a country of 137 crore people, with such diversity, dissent is national says @ReallySwara at The Telegraph Calcutta Club National Debate 2020. #TTDebate2020

A Kashmiri Pandit with roots in Srinagar, he is a vocal critic of the “injustice” meted out to his tribe during the mass exodus in the 90s. The co-founder of Roots-in-Kashmir, Sushil keeps the fire burning in TV studios during prime time debates on Kashmir. Sushil also publishes Praznath, a bilingual journal on the culture and identity of Kashmir. An alumnus of Delhi University and JNU, the man knows a thing or two about communication. He makes a living by managing communication for his corporate clients and also teaches strategic media planning at the Indian Institute of Mass Communication as an adjunct faculty.

He is Trinamul’s Gen-Next. The Twitter-happy leader does not pull any punches. So, he tweeted:

.@kunalkamra88 got a flying ban for Frankly Speaking with Arnab Goswami on board an @IndiGo6E Flight@flyspicejet follows suit fearing a Pragya vs Pragya face-off

& @airindiain being on sale can’t even imagine a Chowkidar vs Chowkidar showdown.

⚫ Abhijit Chakrabarti against the motion.

⚫ My views are personal. The higher education is suffering from student protests and activism.

⚫ What is student unrest and student violence? We are facing these issues like this because of students' indiscipline. Political aspiration behind dissent among students. Over-activism leads to unrest and discipline.

⚫ Campus violence  and dissent are being influenced by outsiders.

⚫ 'Undercover anti-national agents'. Student agitations on campuses are being instigated by Left-leaning individuals who have lost footing in society.

⚫ When defined groups, activists in universities raise anti national slogans then it should become the duty of the government to identify and shut them down

On Saturday, how frankly will the MP speak?

Student indiscipline in this country has been far worse than many catastrophes: Abhijit Chakrabarti speaks at The Telegraph Calcutta Club National Debate 2020. #TTDebate2020

⚫ Abhishek Banerjee for the motion.

⚫ He takes a dig at Dilip Ghosh after taking the stage.

⚫ You all continue choose to agree with the government ruling this country.

⚫ You agree to disagree with a government that wants to decide what we are to eat and wear.

⚫ Their idea of nationalism is divisive and destructive.

⚫ The idea of nationalism is built on greed of power.

⚫ Our ancestors would ashamed of what our nation has to come to.

⚫ You think you can fool people, it isn't so easy. You are promoting lawlessness. Hooliganism is hailed and rewarded.

⚫ Who are you to decide what is nationalism or anti-nationalism.

⚫ He links dissent to the abolishment of sati, end of British Raj, anarchism, etc.

⚫ Time has come to reclaim our freedom to talk. Breathe, Speak up while you can.

Do not forget that 63% people of the country voted against the ruling government at the centre. Who are they to teach us what is national and what is anti-national? @abhishekaitc at The Telegraph Calcutta Club National Debate 2020. #TTDebate2020

⚫ Sushil Pundit speaks against the motion.

⚫ Argument, debate, scrutiny and logic have been the hallmark of our democracy.

⚫ The right to dissent is used for destruction in today's world.

⚫ Freedom to protest is used to cripple our cities.

⚫ In a few campuses of India, people are chanting cheen ke lenge azaadi, what they don't realise is that it is an open insult to violence... would you call this dissent.

⚫ On Kashmir, he said Constitution is the most liberal document in the world.

⚫ Anti-nationals using dissent as a ruse.

The word 'Azadi' in campuses today is being used to put out open calls for violence, says @neelakantha at The Telegraph Calcutta Club National Debate 2020. #TTDebate2020

⚫ We are used to go to the Left because WE think it is Right. If we students protest the instances and policies happening across the country, we are considered to be anti-nationals. There cannot be democracy without dissent.

⚫ Our nation is striving to attain homogeneity of Hindu, Hinduism and nationalism.

⚫ She takes a dig at gender parity.

⚫ There cannot be just one side in a democracy

⚫ Universities and education system have excluded people like Rohith Vemula and Fatima Latif.

⚫ I have a problem with nationalism when does not fulfill the demands of the citizens.

Calcutta Club president Subrata Kumar Basu thanks the The Telegraph. The club was formed in 1907. He elucidates the history of the founding members of the club.

The Moderator, Dr. Kunal Sarkar, introduces the motion. He is also the president of The Calcutta Debating Circle.
Sarbani Gooptu will be keeping time for the speakers.

⚫ In today's India, dissent has been made anti-national