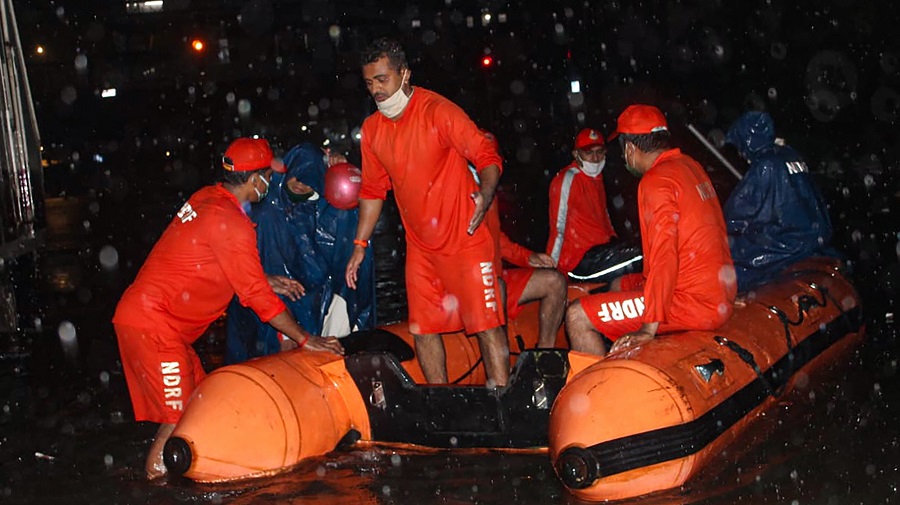 Mumbai, which was battered by heavy rains on Wednesday, may see less intense showers on Thursday, the Indian Meteorological Department (IMD) said in a late-night forecast, though authorities asked people to stay home and be alert.

There was some decrease in the cloud mass around Mumbai, the IMD said.

The Doppler weather radar Mumbai is showing up a little reduction in cloud mass around Mumbai. Intermittent intense spells are going on in Mumbai, Thane, Palghar and North Konkan," said K S Hosalikar, deputy director general of IMD, Mumbai. "Reduction in activity is expected from tomorrow onwards as per the IMD global forecast system model guidance. The IMD will update about it tomorrow," he added.

While Mumbai, Raigad, Palghar, Thane are still expected to receive heavy rain at isolated places, an orange alert has been issued for Ratnagiri, Sindhudurg, Pune, Kolhapur and Satara districts.

Mumbai received the highest rainfall of the season within just 12 hours on Wednesday besides the highest-ever wind speed, the city civic body said.

According to the Brihanmumbai Municipal Corporation (BMC), the island city recorded 215.8 mm rain, followed by 101.9 mm in eastern suburbs and 76.03 mm in western suburbs. The 'D' civic ward, that includes upscale areas like Malabar Hill and Peddar Road, received 309 mm rainfall, while the maximum wind speed of 101.4 kmph was recorded at Marine drive around 4.15 pm, the civic body said.

"The Fire Brigade and its flood rescue teams are deployed at half a dozen Regional Reconciliation Centres with the required manpower and equipment. Three units of the National Disaster Response Force (NDRF) were also active and they have been asked to be ready for immediate help in case of an emergency," the BMC said.

34 roads including 9 state highways have been closed for traffic movement due to flooding in Kolhapur.

Prime Minister Narendra Modi on Wednesday assured all possible support to the Maharashtra Chief Minister Uddhav Thackeray regarding the situation prevailing in Mumbai and surrounding areas.