Advertisement
Home / India / Leaders of Australia, Germany and France to visit India in next few months

Leaders of Australia, Germany and France to visit India in next few months 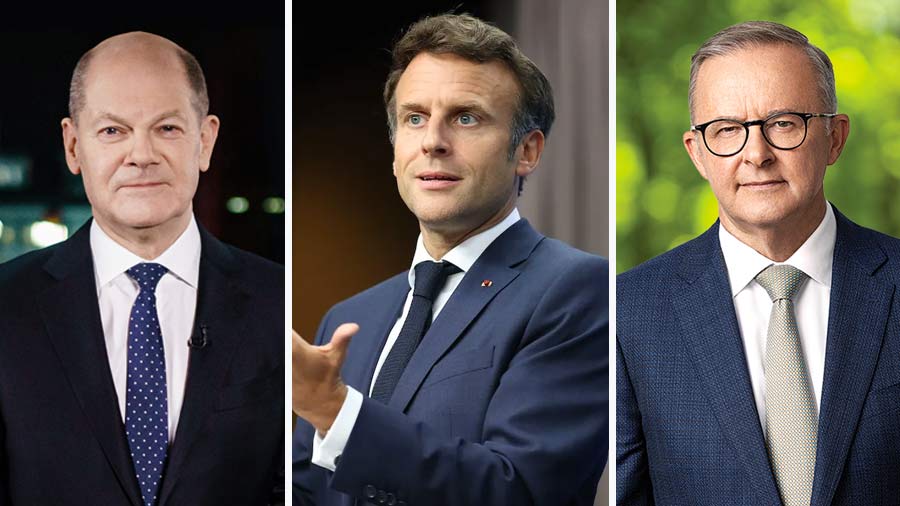 India is expected to witness a flurry of visits by top foreign leaders including German Chancellor Olaf Scholz, French President Emmanuel Macron and Australian Prime Minister Anthony Albanese in the next few months amid mounting global concerns over adverse impact of the Ukraine conflict on food and energy security.

The primary focus of these visits are expected to be on expansion of bilateral cooperation in areas of energy, trade, technology, defence production, health-care and people-to-people exchanges, people familiar with the preparations for the visits told PTI.

A front-burner issue in the talks is set to be the conflict in Ukraine and its global implications including on food and energy security, they said.

While Chancellor Scholz is expected to be in India later next month, Albanese is set to visit the country in early part of March, the people said.

The French side was initially exploring the visit by Macron in the first week of March but nothing has been firmed up yet, they said, adding the trip may even be advanced or could be pushed back.

They said dates for the visits have not been locked yet.

President of Egypt Abdel Fattah El-Sisi will visit India later this month to grace the Republic Day celebrations as the chief guest.

The foreign ministers of G20 countries will also be in New Delhi to attend a foreign ministerial meeting of the powerful grouping which is likely to take place on March 1 and 2.

Several foreign leaders will also visit India to attend the 'Raisina Dialogue' that is scheduled to be held from March 2 to 4. It is India's premier conference on geopolitics and geoeconomics.

About German Chancellor Scholz's proposed visit to India, the people cited above said both sides are keen on enhancing cooperation in areas of trade, defence, clean energy and climate change.

Prime Minister Narendra Modi and Chancellor Scholz held bilateral talks in the Indonesian resort city of Bali on November 16 on the sidelines of the G20 summit.

The first meeting between the two leaders took place during Modi's visit to Berlin on May 2 for the 6th India-Germany Inter-Governmental Consultations (IGC).

It was followed by Modi's visit to the Alpine castle of Schloss Elmau in southern Germany on June 26 and 27 to attend the annual summit of G7 grouping.

It will be Scholz's first visit to India after he became German Chancellor in December 2021.

The people said expansion of cooperation in the Indo-Pacific in the backdrop of China's growing military muscle-flexing in the region is expected to figure in the talks during the visits to India by leaders of Germany, France and Australia.

Diplomatic sources said boosting trade and maritime security cooperation will figure high on the agenda of talks between Modi and Albanese.

It will be the first visit to India by the Australian leader after he took charge of the top office last May.

The ties between India and Australia have been on an upswing in the last few years. The India-Australia Economic Cooperation and Trade Agreement (ECTA) came into force last month and it is expected to facilitate significant expansion of two-way trade.

Expansion of overall defence and strategic cooperation is likely to be high on the agenda during French President Macron's trip to India.

French fighter jet Rafale is learnt to be ahead of American F/A-18 Super Hornet in the multi-billion dollar contract to supply 26 deck-based jets to the Indian Navy.

There have been speculation that India may announce firming up the procurement of the marine version of the Rafale jet during Macron's visit. However, there is no official word on it yet.