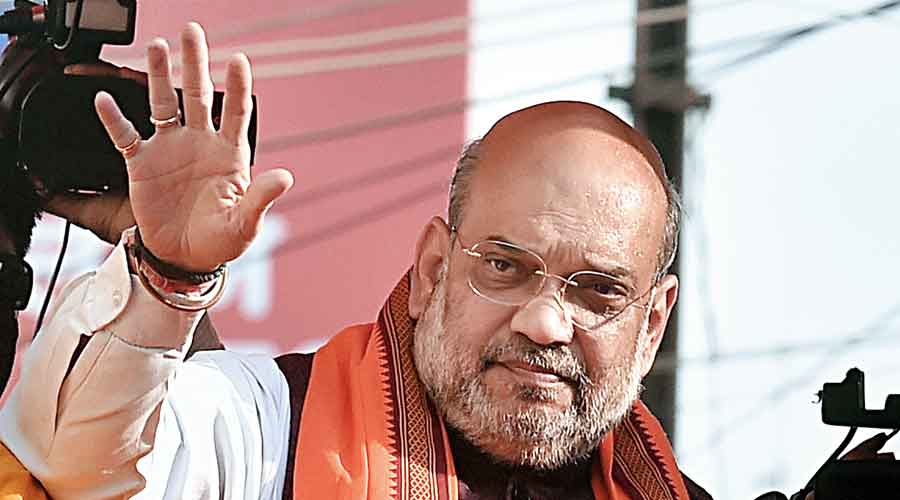 Union Home Minister Amit Shah on Monday lauded the BJP government in Manipur for bringing peace and all-round development in the last five years and said there has been a significant improvement in the law and order situation in the state.

While virtually laying the foundation stone of the Rani Gaidinliu tribal freedom fighters' museum in Manipur, Shah said the government at the Centre and the N Biren Singh government in Manipur have brought tremendous improvement in the law and order situation, education, power and other infrastructure sectors.

"Before coming to power in Manipur, we had promised to end bandh, hartal and blockade. We have ended all the three and significantly improved the law and order situation in Manipur," he said.

The BJP came to power in Manipur for the first time in 2017.

Shah said for the first time since Independence, those living in the hill areas of Manipur have felt that there is a central government that thinks about their welfare.

The people living in the hills got power and gas connections, free toilets and saw the setting up of schools, he said.

"The governments of Narendra Modi and Biren Singh brought all these developments. I am sure the people of Manipur will again elect a BJP government in Manipur," he said.

Assembly elections in Manipur are due early next year along with that in Uttar Pradesh, Uttarakhand, Punjab and Goa.

Shah also paid rich tributes to Gaidinliu, and said people called her as 'Rani' acknowledging her role in the struggle against the British.

The home minister said on her birth centenary commemoration function in 2015, the prime minister had released a coin of Rs 100.

The Rani Gaidinliu tribal freedom fighters museum will be set up at Luangkao village in Tamenglong district of Manipur, where she was born.

While the Manipur chief minister, Union Tribal Affairs Minister Arjun Munda and other dignitaries attend the event in Imphal, Shah addressed it through video conferencing from Delhi.

The museum project has been sanctioned by the Ministry of Tribal Affairs at an estimated cost of Rs 15 crore.

Rani Gaidinliu was born on January 26, 1915. At the age of 13, she was associated with Haipou Jadonang, a spiritual leader and political activist from Manipur, and became his lieutenant in his social, religious and political movement.

Her four-year association with Jadonang that started around 1926 prepared her to be the fighter against the British.

After the execution of Jadonang by the British in 1931, Gaidinliu took up the leadership of the movement.

Gaidinliu started a revolt against the British after the martyrdom of Jadonang for which she was imprisoned by the Britishers for 14 years and finally released in 1947.

She was released from Tura jail (Meghalaya) after India got Independence.

She was awarded the Tamrapatra in 1972, Padma Bhushan in 1982, Vivekananda Sewa Summan in 1983, Stree Shakti Purashkar in 1991 and Bhagwan Birsa Munda Puraskar in 1996 posthumously.

The government of India issued a commemorative stamp on Rani Gaidinliu in 1996.