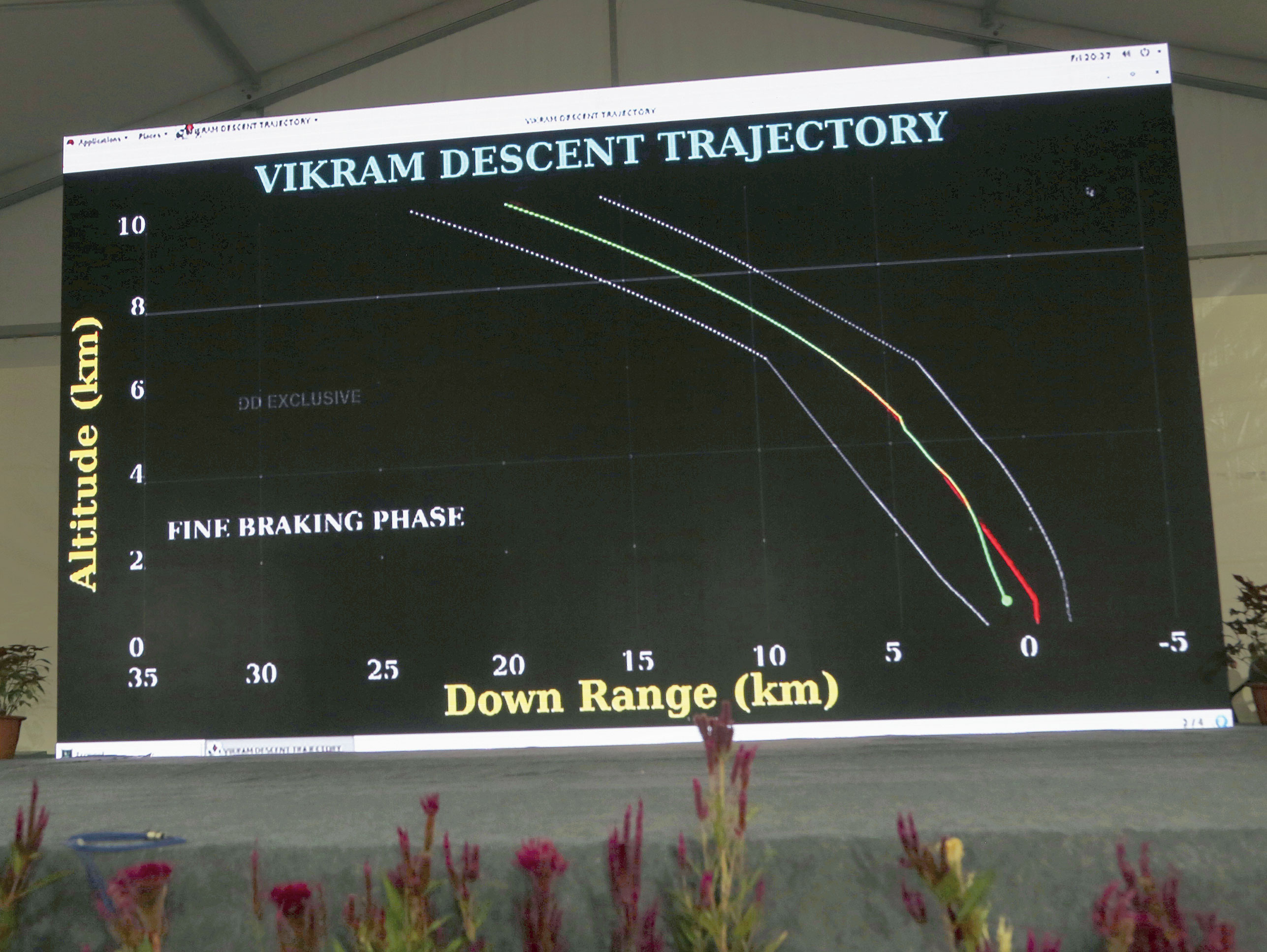 The first inkling that something was amiss came close to 1.53am on Saturday, when India’s second moon mission was to touch down on the lunar surface, as scientists gathered at the Indian Space Research Organisation’s media centre to watch the event live.

The green line representing the trajectory of Vikram — the lander named after the father of India’s space programme, Vikram Sarabhai — had diverted from its path at a point just 2.1km from the lunar surface.

Suddenly the media centre went silent. Some of the scientists exchanged nervous glances. They knew the stakes were high: a successful Chandrayaan-2 would make India only the fourth country to land a craft intact on the moon and the first to probe the unexplored lunar south pole, a possible source of water ice.

To highlight the challenges involving the lunar gravity, terrain and dust, Isro chairman K. Sivan had earlier predicted the final moments of the touchdown would be “15 minutes of terror”, but in recent weeks the mood in the agency had been bullish.

At the media centre on Saturday, false hope dawned after a painful wait of several minutes when mission director Ritu Karidhal announced from the Isro Telemetry Tracking and Command Network that data had been received from the lander.

Applause broke out and the scientists patted each other, expecting a miraculous recovery. A scientist from Kerala, who did not reveal her name, appeared confident that the lander was “alive”.

A colleague, also from Kerala, was less optimistic about the lander restoring contact. “I don’t know,” he said.

Eventually, Sivan issued a statement at 2.15am, stopping short of officially acknowledging failure.

“(The) Vikram lander descended as planned up to an altitude of 2.1km and normal performance was observed. Subsequently the communication from the lander to the ground station was lost. The data is being analysed,” he read out from a prepared text.

As the scientists and engineers began leaving, one of them stressed that not all was lost. “The orbiter is still up there,” he said.

He was referring to the 2,379kg orbiter that will circle the moon for a year and will now become the focus of the Chandrayaan-2 team. Its eight payloads include cameras to map the lunar surface, an X-ray spectrometer to identify elements and determine their distribution on the moon, and a dual frequency synthetic aperture radar that can look for water beneath the lunar surface.

What the mission has lost are the 1,471kg lander and the 27kg, six-wheeled robotic rover named Pragyan it was carrying, along with their five payloads. Pragyan was to crawl around at 1cm per second, conduct experiments and communicate with the earth station through the lander.

An Isro statement in the evening suggested the mission had accomplished “90 to 95 per cent” of its objectives.

Prime Minister Narendra Modi, who was at the mission control a short distance from the media centre, tried to comfort the crestfallen scientists by hailing a mission his government had played up as a symbol of India’s growing prestige on the global stage.

“There are ups and downs in life…. What you have accomplished is no small achievement,” he said.

While Isro would not conjecture about a “hard” instead of the planned “soft” landing, Modi hinted that the lander may have travelled at a speed higher than the expected 2 metres per second and crash-landed on the moon.

“If historians some day write about today’s incident, they will certainly say that inspired by our romantic description of the moon throughout life, Chandrayaan, in the last leg of the journey, rushed to embrace the moon,” he said. “I can proudly say that the effort was worth it and so was the journey.”

In a televised event, Modi embraced and consoled a visibly heartbroken Sivan. “We are full of confidence that when it comes to our space programme, the best is yet to come,” the Prime Minister said.

Only the United States, Russia and China have landed spacecraft successfully on the moon. India’s first lunar mission, Chandrayaan-1, had deliberately crash-landed a box called the Moon Impact Probe, crammed with instruments, in a suicide dive on the lunar surface on November 14, 2008.

After the July 22 Chandrayaan-2 launch, the lander separated from the orbiter on September 2. It went through a few orbit corrections to fly as low as 30km from the lunar surface, from where the descent began early on Saturday.

Fifteen minutes before the planned landing, Vikram was travelling at about 5,900km per hour. Four of its engines then fired to quickly slow it down as it headed towards its landing site.

For a while, it appeared that Vikram was descending too fast and then data from the spacecraft ended, The New York Times reported.

This was the third attempted moon landing this year. In January, China landed the first probe ever on the far side of the moon.

An Israeli non-profit sent a small robotic spacecraft named Beresheet to the moon but its landing attempt in April went awry. The initial descent went as planned but then communications were lost near the surface, as with Chandrayaan-2. It was later discovered that a command to shut off the engine was sent incorrectly.

The moon is littered with the remains of spacecraft that have tried and failed to land in one piece. Two American craft, from the robotic Surveyor series that helped blaze the trail for Apollo, crashed in the 1960s. Several probes from the Soviet Luna programme too collided with the moon’s surface.