Amid tight security, three accused were taken to the site of the incident on the Tikonia-Banbirpur road 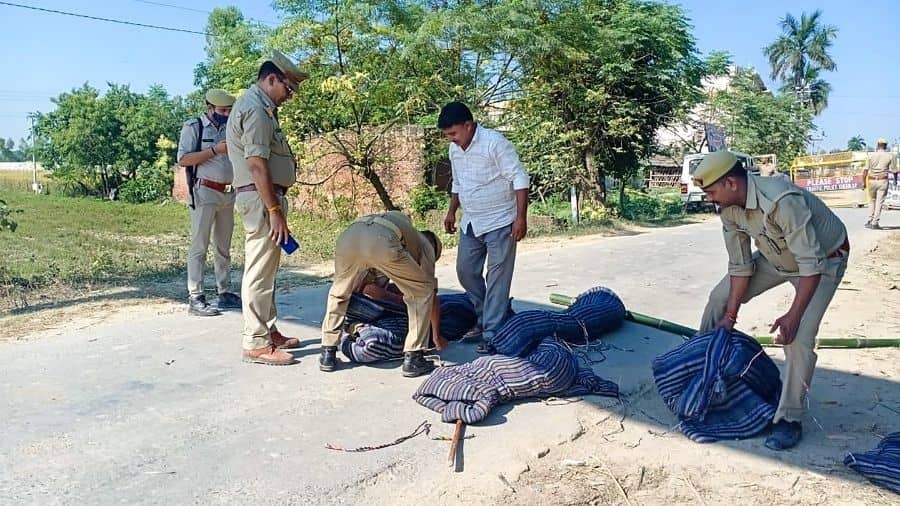 The SIT probing the Lakhimpur Kheri violence on Thursday took Union Minister Ajay Mishra's son and three others arrested in the case to recreate the sequence of events leading to the incident in Uttar Pradesh's Tikonia village.

Amid tight security, the three accused were taken to the site of the incident on the Tikonia-Banbirpur road, around 60 km from district headquarters Lakhimpur city, police said.

Eight people died in the October 3 violence and of them, four were farmers, allegedly knocked down by a vehicle carrying BJP workers.

Infuriated farmers then allegedly lynched some people in the vehicles. The other dead included two BJP workers and their driver. In the incident, a journalist was also killed.

Farmers claimed that Union Minister Ajay Mishra's son Ashish Mishra was in one of the vehicles, an allegation denied by him and his father who say they can produce evidence to prove he was at an event at that time.

Ashish Mishra 'Monu' was arrested in the case on October 9 after 12 hours of questioning, and a court has accepted his police custody from October 12 to October 15.

Ashish, son of Union minister Ajay Mishra Teni, was allegedly driving a Thar jeep at the head of a convoy of SUVs that had ploughed into protesting farmers at Tikunia in Lakhimpur Kheri on October 3, killing four farmers and a journalist.

“Monu (Ashish) has still not admitted committing the crime and is insisting he was in his village Banvirpur (4km from Tikunia), attending a wrestling programme,” a state home department official said, requesting anonymity.

“He says his associates had gone to receive deputy chief minister Keshav Prasad Maurya, the chief guest at the event. But he has failed to explain why the Thar was travelling on that road (where the farmers were protesting) when it was public knowledge that Maurya’s route had already been changed.”

Das, Latif and Bharti are in police custody from October 14 to October 17.

On Thursday, investigators reached the district jail premises in the morning to take Das, Latif and Bharti into police custody.

The trio were taken to the crime branch's office at the Reserve Police Lines, which is near the district jail where main accused Ashish Mishra is lodged.

They were taken to Tikonia village by the special investigation team (SIT) amid heavy security for further investigations, police said.