Family members of the deceased sat on the dais holding their photographs, urns containing the ashes of the five men were placed in front 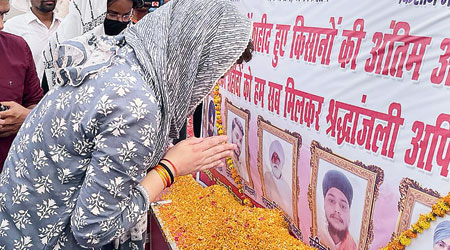 The antim ardas or last prayer for the four farmers and one journalist mowed down in Lakhimpur Kheri was held in front of a gurdwara at Tikunia village on Tuesday, with thousands of farmers arriving at the event from various states.

Family members of the dead farmers — Daljeet Singh and Gurvinder Singh of Bahraich, Nachhattar Singh and Lavpreet Singh of Kheri — and of slain journalist Raman Kashyap of Kheri sat on the dais holding their photographs. Urns containing the ashes of the five men were placed in front.

The antim ardas began at 8am and ended at 3pm. The granthis read out passages from the holy scriptures as gurdwara members honoured the five families by giving them saffron saropas (scarves). The Samyukta Kisan Morcha gave them green scarves.

The five men were returning from a farmers’ protest on October 3 when they were mowed down by a convoy of cars led by a Thar jeep belonging to local MP and Union minister of state for home Ajay Mishra Teni. The minister’s son Ashis, who was allegedly in the Thar, is in police custody. (See Page 3)

Kisan Morcha leader Darshan Pal Singh, who conducted the programme from the dais on behalf of the gurdwara, announced that urns containing the ashes of the dead had been given to a few select people who had arrived from Uttar Pradesh, Uttarakhand, Haryana, Punjab, Delhi and Madhya Pradesh.

“They will organise processions in their respective districts before immersing the ashes in rivers,” Pal said.

He announced that the gurdwara committee had decided to build a memorial to the five men on land the committee owns in Tikunia.

Congress leader Priyanka Gandhi Vadra and Rashtriya Lok Dal president Jayant Chaudhary were present too, but they were not on the dais.